In The Spotlight: Bud Grant, A Rare Two-Sport Star 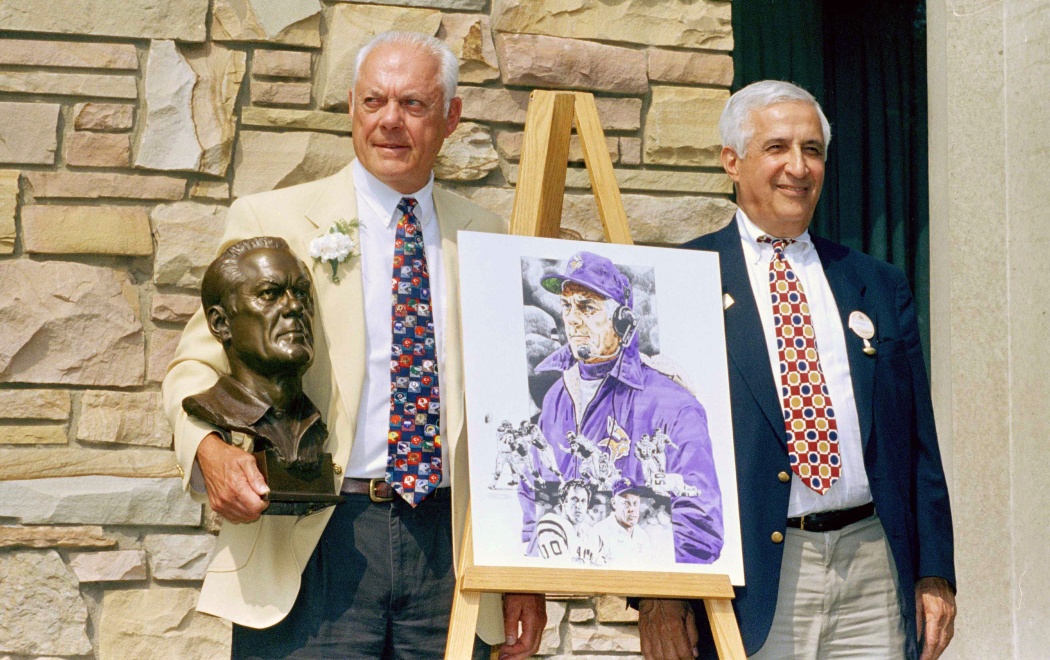 Today’s fans are intrigued by the possibility of Kyler Murray playing professional baseball. His passion for the sport — and his arm — could open that door.

Not long ago, another quarterback, Russell Wilson, gave baseball a shot before focusing his athletic skills solely on the National Football League. Before them, Deion Sanders and Bo Jackson not only played baseball and football at the highest level, but they also put together noteworthy seasons and sustained their dual careers over several years.

Rare, though, is the football/basketball two-sport professional, and one of them, perhaps surprisingly to fans who know him only as the longtime stoic coach of the Minnesota Vikings, is Harry “Bud’ Grant Jr.

A Class of 1994 member, Bud steps into this week’s Hall of Fame Spotlight.

After sterling high school and college careers (eight letters in three sports at the University of Minnesota), Bud was drafted by both the Philadelphia Eagles (first round, 14th overall) and the Minneapolis Lakers (fourth round, 42nd overall). He chose pro basketball.

Bud played a season and a half with the Lakers, winning an NBA championship with the 1949-50 team. He then joined the Eagles for two years. Playing defensive end in 1951, he led the Eagles in sacks (an unofficial record for several more decades), before switching to offense for the 1952 season. He caught a team-leading 56 passes for 997 yards (17.8 average) and seven touchdowns.

Unable to reach agreement on a new contract, Bud headed north to Winnipeg. He played four seasons with the Blue Bombers of the Canadian Football League, leading the team in receptions three times and once intercepting five passes in a game, then became the youngest coach in CFL history (age 30) for the 1957 season. Over the next 10 years, he led the Blue Bombers to 122 wins, six appearances in the championship Grey Cup game and four CFL titles.

In 1967, Bud returned to the NFL. He would lead the Vikings to 11 NFC Central Division titles in his first 14 seasons in Minnesota (he coached 18 overall) and to four Super Bowls.

There’s much more to Bud than the square-jawed coach who seemingly wore little more than a windbreaker on the coldest of days at the “frozen tundra” of old Metropolitan Stadium.

This week, fans can learn something new as the Hall welcomes Bud into the Gold Jacket Spotlight.

Stories From The Hall of Fame Archives: Thanksgiving game tradition dates to 1934

The NFL has been playing games on Thanksgiving Day since its inaugural season in 1920.

Hall of Fame Goes 'Behind the Walls' with Centurion Health

Last year with Centurion, three Hall of Famers went behind the walls and visited with the residents at two Tennessee state prison facilities to inspire the population to stay motivated to make healthy mental and physical choices.