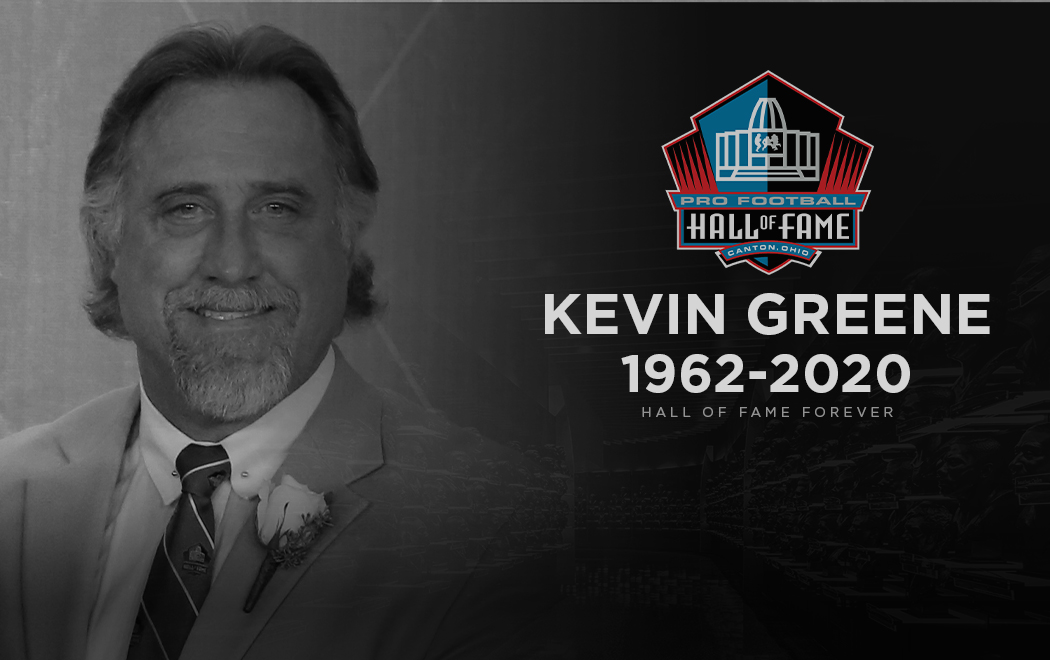 The football world today is mourning the death of Kevin Greene, whose skills, work ethic and exuberance for the game made him a fan favorite at every stop along his 15-year career in the National Football League.

A member of the Pro Football Hall of Fame’s Class of 2016, Greene died Monday at his home in Florida. He was 58.

“The entire Pro Football Hall of Fame family mourns the passing of Kevin Greene. I regarded him as a personal friend and a true Hall of Famer in every sense. He possessed the most incredible can-do attitude of anyone I ever met. He was a great player, but more than that, he was a great man. Our thoughts and prayers are with Kevin’s wife, Tara, and their entire family. We will forever keep his legacy alive to serve as inspiration for future generations. The Hall of Fame flag will be flown at half-staff in Kevin’s memory.”

Greene was a fifth-round draft pick (113th pick overall) of the Los Angeles Rams in the 1985 NFL Draft following a college career at Auburn that began as a walk-on under Coach Pat Dye. By his senior year, he was dominant: 11 sacks and 69 tackles en route to the Southeastern Conference’s Defensive Player of the Year Award. He credited his daily head-to-head practices across the line against future three-time Super Bowl champion Steve Wallace and against Heisman Trophy-winning running back Bo Jackson for his development and preparing him for the pros.

His career in the NFL evolved slowly, however.

Greene played primarily on special teams as a rookie, and that year marked the only regular season in which he did not register a sack. He did record a sack in the playoffs as the Rams shut out the Dallas Cowboys before losing in the NFC title game to the eventual Super Bowl champion Chicago Bears.

As a second-year player, Greene collected seven sacks, and he added 6.5 sacks in nine games in 1987.

His career took off in 1988, when the Rams adjusted their scheme, moving Greene from left defensive end to left outside linebacker. That season, he amassed a career-best 16.5 sacks, second only to future Hall of Famer Reggie White. The highlight game in a season full of highlights came in the regular-season finale: a career-best 4.5 sacks in a 38-16 win over the San Francisco 49ers that clinched a playoff spot for the Rams.

Greene matched his season high with 16.5 sacks the following season and totaled 13 more sacks in 1990.

“I loved getting a sack,” said Greene, who reached double digits in that statistic in 10 of his 15 seasons. “My teammates depended on me to do that. I contributed. I didn’t want to let my teammates down … (It) was just me making a contribution and not letting my brothers down.”

Greene made 160 of those “contributions” in his career, which ranked him third all-time following his retirement after the 1999 season. He led the league twice: with 14 for Pittsburgh in 1994 and 14.5 for Carolina in 1996. He also recorded three safeties, forced 23 fumbles, recovered 26 fumbles and intercepted five passes.

Greene, who played in 228 games, was named to the Pro Bowl five times (once with the Rams, and twice with the Steelers and Panthers). Greene was selected All-Pro in 1989 with the Rams, in 1994 with Pittsburgh and with Carolina in 1996. He is a member of the NFL’s All-Decade team of the 1990s.

He played in six conference championship games and one Super Bowl, with Pittsburgh in 1995. He had joined the Steelers as a free agent in 1993.

On his three years in Pittsburgh, Greene said: “I believed in my heart that I was unblockable, and it was a phenomenal experience.”

In 1996 in Carolina, he helped the Panthers to the NFC Championship Game. He set an NFL record with five consecutive multi-sack games, earning various awards as the league’s top linebacker and All-Pro status.

Following his NFL playing days, Greene appeared on the pro wrestling circuit, then entered coaching. He was on the staff of the Super Bowl XLV champion Green Bay Packers.

Greene grew up as the son of a colonel in the U.S. Army, a decorated Vietnam veteran who was a Ranger in the 101st Airborne Division. He said his father instilled in him and his older brother strong, lifelong values: “Be men of honor, have integrity, be respectful, have an attitude of selfless service.”

He completed the ROTC program while playing at Auburn and was commissioned a second lieutenant in the Alabama Army National Guard.

“I am standing on the shoulders of many, many players, many coaches, many people,” Greene said in his Enshrinement speech.

His legacy is one for future generations to stand on. It will be preserved forever at the Pro Football Hall of Fame in Canton.

Here are other reactions from across the league:

Matt Rhule on Kevin Greene’s passing: “A great player, coach and obviously, Carolina Panthers. His loss is sad for us all.”

We lost a part of history today 🙏https://t.co/eKRepCpEcl

.@ProFootballHOF LB Kevin Greene has passed away at the age of 58.

Rest in peace to a legend. pic.twitter.com/pKfTlY66Gu

Kevin Greene was a true warrior and a dear friend!!! As much as I disliked playing against him I loved everything about him at the same time and I loved him like a brother. Gods army just got much stronger 🙏 RIP brother

A big personality with an even bigger heart.

The 49ers organization extends its prayers and condolences to the family and friends of Kevin Greene.

A member of the @ProFootballHOF, Greene wore the red and gold in 1997. He registered 10.5 sacks and helped the 49ers win the NFC West. pic.twitter.com/PeiiKMxseA

Our thoughts are with the family of NFL legend Kevin Greene. A former Jets coach, Kevin made a positive impact on everyone he met. He'll be missed. pic.twitter.com/ok2MP8LNp4

Wow can't believe we have lost another one of my @ProFootballHOF brothers . Kevin Greene beat me for my first sack of my career. I learned alot playing him as a rookie. I will miss him alot. Condolences & prayers for his family. Rest well my friend. 🙏🏽🙏🏽@sackmaster91 pic.twitter.com/vlvb7UKJzB

My thoughts and prayers go out to the family of my HOF Brother #KevinGreene... I am shocked to hear the news about my friend, as I reflect on the time we spent over the years! I will miss you brother... but Heaven got better today! Until we meet again #RIP

We lost a legend in Kevin Greene. He was a HOF player and even better person. His passion for football and life exuded in everything he did. His spirit will live forever. Condolences to Tara and the entire Greene family. Heaven just got better on Defense. Love that man.

Today, the man who put player evaluations in the spotlight – first for the Dallas Cowboys and later for the entire League – steps into the Gold Jacket Spotlight.