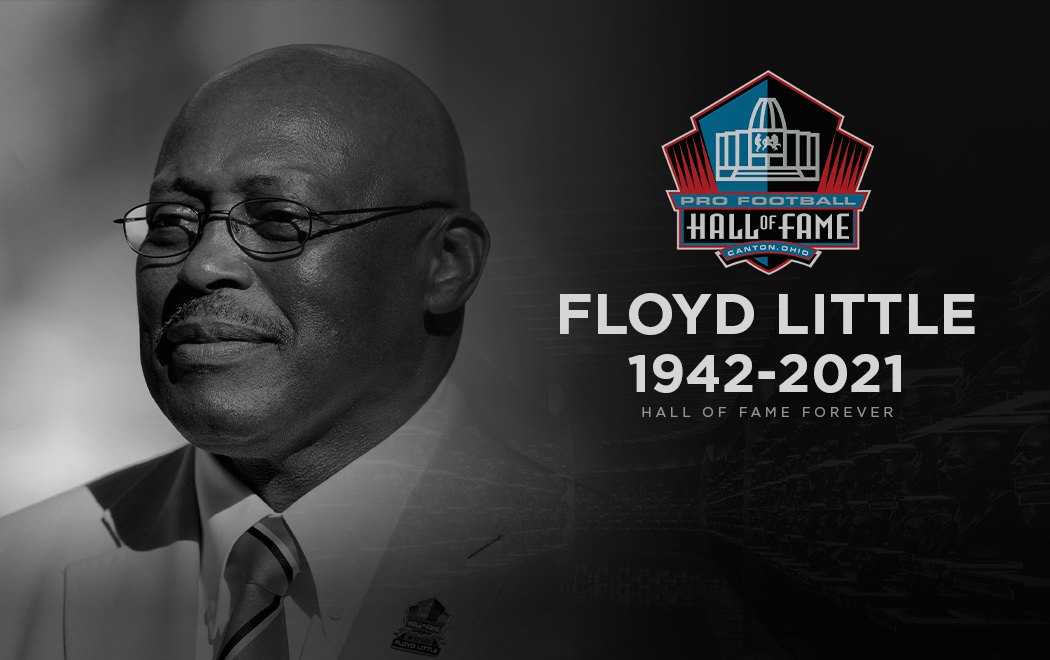 The professional football world today is celebrating the life and mourning the passing of Floyd Little, an “uncommon man” who used his platform to encourage those who, like himself, had been told they were not big enough or smart enough or talented enough to succeed.

“Floyd Little was a true hero of the game. He was a man of great integrity, passion and courage. His contributions off the field were even greater than his amazing accomplishments he did on it. Floyd’s smile, heart and character epitomized what it meant to have a Hall of Fame life.

Our thoughts and prayers are with Floyd’s wife, DeBorah, and their entire family. We will forever keep his legacy alive to serve as inspiration for future generations. The Hall of Fame flag will be flown at half-staff in Floyd’s memory.”

Little, a scrappy kid from New Haven, Conn., burst onto the scene when he chose to play football at Syracuse. He donned the iconic No. 44 worn previously by legendary running backs Jim Brown and Ernie Davis. While at Syracuse, he was named an All-American three times, paving the way for the Denver Broncos to select him sixth overall in the 1967 AFL-NFL Draft.

In his rookie year, Little appeared in 13 games, starting 12, and rushed for 381 yards on 130 carries. The Broncos used him extensively in their return game, and he led the AFL with an average of 16.9 yards on 16 punt returns. He also returned 35 kickoffs that seasons for 942 yards, a career high and second best in the league that year.

Little increased his rushing yardage each of the next four seasons, with production that led to four consecutive Pro Bowl selections and one spot, in 1969, on the All-Pro first team. That year, he rushed for a career-best 5.0 yards per carry and a league-leading 81 yards per game.

His best season statistically came in 1971. Playing in all 14 games, he carried 284 times and won the NFL rushing title with 1,133 yards — on a team that finished last in its division with a record of 4-9-1 and possessed few other offensive threats.

As the Broncos’ offense evolved, so did Little’s game. Over his last five seasons (1971-75), he averaged 31 receptions and 339 receiving yards per year.

During the six-season run from 1968 to 1973, Little rushed for more yards and totaled more yards from scrimmage than any running back in the NFL. Despite that production, however, the Broncos could muster only two winning seasons in his nine-year career.

In the late 1960s, many wondered if the team might leave Denver, but the drafting of Little gave the Broncos a fresh start — and him the nickname “The Franchise.” He was elected team captain as a rookie and retained the honor of captaincy his entire career.

“Floyd Little can often be heard saying, ‘I do not choose to be a common man; it is my right to be uncommon if I can.’ That's my dad, an uncommon man,” Marc Little said in presenting his father for enshrinement in 2010.

“As an athlete, they said he wasn't tall enough or big enough to make a difference,” Floyd’s son continued. “My dad had a calling to greatness, a divine call that predestined this very moment.”

Little used his enshrinement speech to implore listeners never to give up.

“Because of those that encouraged me in those early years, I am here today. So, I want to encourage you, every student, every athlete, every person who will hear my voice, don't listen to the naysayer. I had plenty of those,” Little said.

He continued: “Leave a legacy that you and your family can be proud.”

Little’s legacy included induction into the College Football Hall of Fame in 1983 and election as a charter member of the Broncos Ring of Fame in 1984.

It also includes a special honor in his hometown.

On Sept. 15, 2011, the New Haven Athletic Center, billed as the largest scholastic/athletics facility in New England, was renamed the Floyd Little Athletic Center.

“Entering the Pro Football Hall of Fame is a cut above all of the awards I've received in sports,” Little told the New Haven Register. “It's historical. But when you put it in perspective, I'm one of 267 people [at that time] in the Hall of Fame. I'm bust number 257 of 267. But how many people enshrined in Canton have a building with their name on it? That's something that perpetuates you. That's what makes me say, `Wow.’”

After his Hall of Fame football career, Little served as a special assistant to the athletic director at Syracuse from 2011-16. In 2016, he received an honorary doctorate degree from Syracuse. Statues of him, Jim Brown and Ernie Davis are erected at the football practice facility.

Little’s legacy will be remembered forever in New Haven, Syracuse and Denver. It will be preserved forever at the Pro Football Hall of Fame in Canton, Ohio.

Here are reactions from others:

We mourn the passing of a Syracuse treasure, Floyd Little.https://t.co/TapFKTw23k

RIP my great friend!! You will be missed by everyone who knew you!! https://t.co/fsmFxeYhMX

Condolences to Floyd Little's family. One of the great privileges in my career was getting to know Floyd, a Hall of Famer in every way.

What a player, and a true gentleman. It was my honor to help select him to the @ProFootballHOF Class of 2010. I grew up in Denver and he was every kid’s hero (and every adult, too.) Thank you, sir, and RIP. https://t.co/Vzf2usV91F

What a wonderful, sweet man. And one of the most joyous I’ve ever seen over his selection. Thrilled he had at least a decade of life to enjoy his immortality after waiting 30 long years for the call. https://t.co/N0JFZPSAUm

A great @Broncos running back and an incredibly nice man. Condolences to his wife and family, his friends and teammates. He was so proud of being in the Hall of Fame. https://t.co/lDdiSn53pc

Rest In Peace to one of the all-time greats. Sending our condolences to the friends & family of Floyd Little. pic.twitter.com/WIXdY5ve2L

"Leave a legacy that you and your family can be proud of. I've given you the best that I've got, and I'm a better person for it."
- Floyd Little pic.twitter.com/fBJUAGkUmm

“Floyd Little embodied what it means to be Orange.” – Chancellor Syverud pic.twitter.com/TzzEwHb5Ud

I have lost a great friend and Syracuse University has lost one of its all-time greatest ambassadors. Floyd Little brought a smile to the face of everyone he encountered. Juli and I send our condolences to DeBorah and Floyd’s family. pic.twitter.com/sIdzEdwhkV

We at NFL Alumni are greatly saddened by the passing of @ProFootballHOF Floyd Little.
He was a man of integrity who was a great friend to many of our Alumni members. Our deepest sympathies to Floyd’s wife DeBorah and their entire family.

Your legacy as “The Franchise” will live on forever. 🧡 pic.twitter.com/s4CGgiK2IQ

“Floyd was a wonderful ambassador for the game and the Denver Broncos, carrying himself with warmth, kindness and class — always with humility and a smile.”#Broncos President & CEO Joe Ellis on the passing of @ProFootballHOF RB Floyd Little: pic.twitter.com/uM6SvDnx2p

Lost another great man today. Thank you for inspiring me. I will keep looking up to you. #FloydLittle #broncoscountry #legend pic.twitter.com/bkTh6tVsUG

This embrace says it all. I love this man who was part of setting the path for running backs in the league. Dr dr HOF , #syracuse ‘s finest. True legacy he has left. Rest in paradise.

We’ve lost a great person and a great Bronco. Floyd will always be a huge part of this organization and his legacy will live on forever.

My heart goes out to DeBorah and the entire Little family. pic.twitter.com/DGkdTiAHHg

Floyd Little and I were students at Syracuse University together. And over the years, I got to know the man behind the number. He was full of character, decency, and integrity. I will miss my friend. The entire Biden family sends our love to DeBorah and the Little family. https://t.co/OsmyvPBFvu

Moore was one of the first NFL players to put a spotlight on the position of flanker.

The NFL's 2020 regular season concludes Sunday. A look at some records that could fall this weekend.