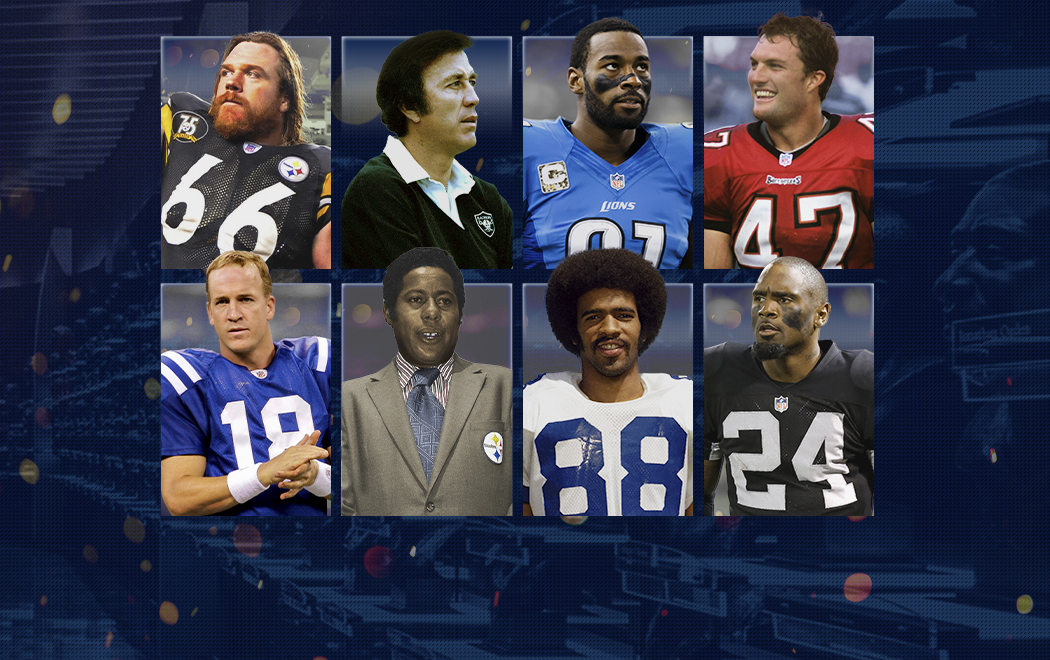 Eight “Heroes of the Game” have been elected to the Pro Football Hall of Fame’s Class of 2021. The Hall’s 48-person Selection Committee met virtually Jan. 19 for its annual meeting.

The annual selection meeting capped a year-round selection process. The newly elected Hall of Famers were chosen from a list of 18 Finalists who had been determined earlier by the Pro Football Hall of Fame’s Selection Committee. Representatives of the accounting firm EY tabulated all votes during the virtual meeting.

The Class of 2021 will be enshrined into the Pro Football Hall of Fame during “the greatest gathering of football” inside Tom Benson Hall of Fame Stadium in Canton on Sunday, Aug. 8, 2021.

9 seasons, 135 games … Second overall selection of 2007 NFL Draft by Lions … Dominant wide receiver during his nine-season NFL career … Selected second overall in the 2007 NFL Draft by the Detroit Lions, where he played his entire professional football career … Started in 130 of his 135 career games … Nicknamed “Megatron” for strong, robotic like abilities on the field … Seven seasons with 1,000-plus receiving yards … Earned NFL pass receiving yardage titles in 2011 and 2012 … At time of retirement in 2015, held NFL records for receiving yards in a season (1,964 yards in 2012) and most consecutive games with a 100 or more receiving yards (8) … Still holds the Lions’ record for most receptions (731) and receiving yards (11,619) … Career stats include 731 receptions for 11,619 yards and 83 touchdowns… Earned Pro Bowl honors six consecutive years (2011-16) … First-Team All-Pro three times; second team once … Selected to the NFL’s All-Decade Team of the 2010s … Born Sept. 29, 1985 in Tyrone, Georgia.

47 seasons … Pittsburgh Steelers “super scout” … Worked as a sportswriter and managing editor at The Pittsburgh Currier, one of the most influential black publications in the U.S. at the  time, developing relationships and becoming extremely knowledgeable about the players and coaches affiliated with Historically Black Colleges and Universities (HBCUs) … Credited with helping build the Steelers’ dynasty of the 1970s; drafting JOHN STALLWORTH (Alabama A&M), MEL BLOUNT (Southern) and DONNIE SHELL (South Carolina State) from HBCUs … Had a knack for locating talent at other small colleges including JACK LAMBERT at Kent State University … Helped Steelers draft many players who would fill integral roles in the team’s six Super Bowl appearances during his tenure, IX, X, XIII, XIV, XL, XLIII … Member of the Inaugural Class of the Black College Football Hall of Fame … Enshrined in the Steelers’ Hall of Honor, 2018 ... Born Sept. 30, 1924 in Homewood, Pennsylvania. Died May 6, 2014 in Pittsburgh, Pennsylvania.

11 seasons, 156 games … Undrafted free agent, signed with Cowboys in 1973 … Retired as the Cowboys’ all-time leader for receptions (489) and receiving yards (7,822) … Caught 48 touchdown passes … Named a first-team All-Pro three times … Selected to play in three Pro Bowls … Member of the NFL’s All-Decade Team of the 1970s … Inserted into starting lineup in rookie season when a teammate got hurt and responded with 22 receptions for 388 yards and two touchdowns in 6 games … Added two TD catches in a postseason win over the Los Angeles Rams that season … Followed in 1974 with 62 catches for 1,087 yards … Team leader in receptions and receiving yards four consecutive seasons, 1974-77 … Led NFL with 870 receiving yards in 1977 … Seven catches for 113 yards in 1977 postseason as Cowboys won Super Bowl XII … Made three Super Bowl appearances in career … Big-game reputation reflected in 68 receptions for 1,131 yards (16.6 average) and 8 TDs in 22 postseason games … Teamed with Roger Staubach for memorable 50-yard score late in 1975 divisional playoff game at Minnesota, giving rise to the term “Hail Mary” pass … Born Jan. 12, 1951 in South River, New Jersey.

18 seasons, 254 games … Made an immediate impact for Raiders after being drafted fourth overall in 1998, earning the AP Defensive Rookie of the Year award and a Pro Bowl berth … Intercepted at least one pass in each of his 18 seasons (one year shy of Darrell Green’s NFL-record 19) … Totaled 65 career interceptions, tied for fifth in League history … Fourth in NFL history for passes defensed with 183 … Twice led NFL in interceptions (nine in 2009; seven in 2011) … In 2014, became first player in NFL history with 50 career interceptions and 20 sacks … Forced 33 fumbles and recovered 18 … AP Defensive Player of the Year in 2009 … Member of NFL’s All-Decade Team of the 2000s … First-Team All-Pro four times … Elected to nine Pro Bowls … Appeared in Super Bowl XXXVII with Oakland, contributing five tackles and an interception in 48-21 loss to Tampa Bay … Contributed two tackles in 31-25 Green Bay victory over Pittsburgh in Super Bowl XLV … Co-holder of NFL record with 13 career defensive touchdowns … One of only two players (with Hall of Famer Marcus Allen) to win Heisman Trophy, AP (Defensive) Rookie of the Year, AP (Defensive) Player of the Year and a Super Bowl title in his career … Born Oct. 7, 1976 in Fremont, Ohio. 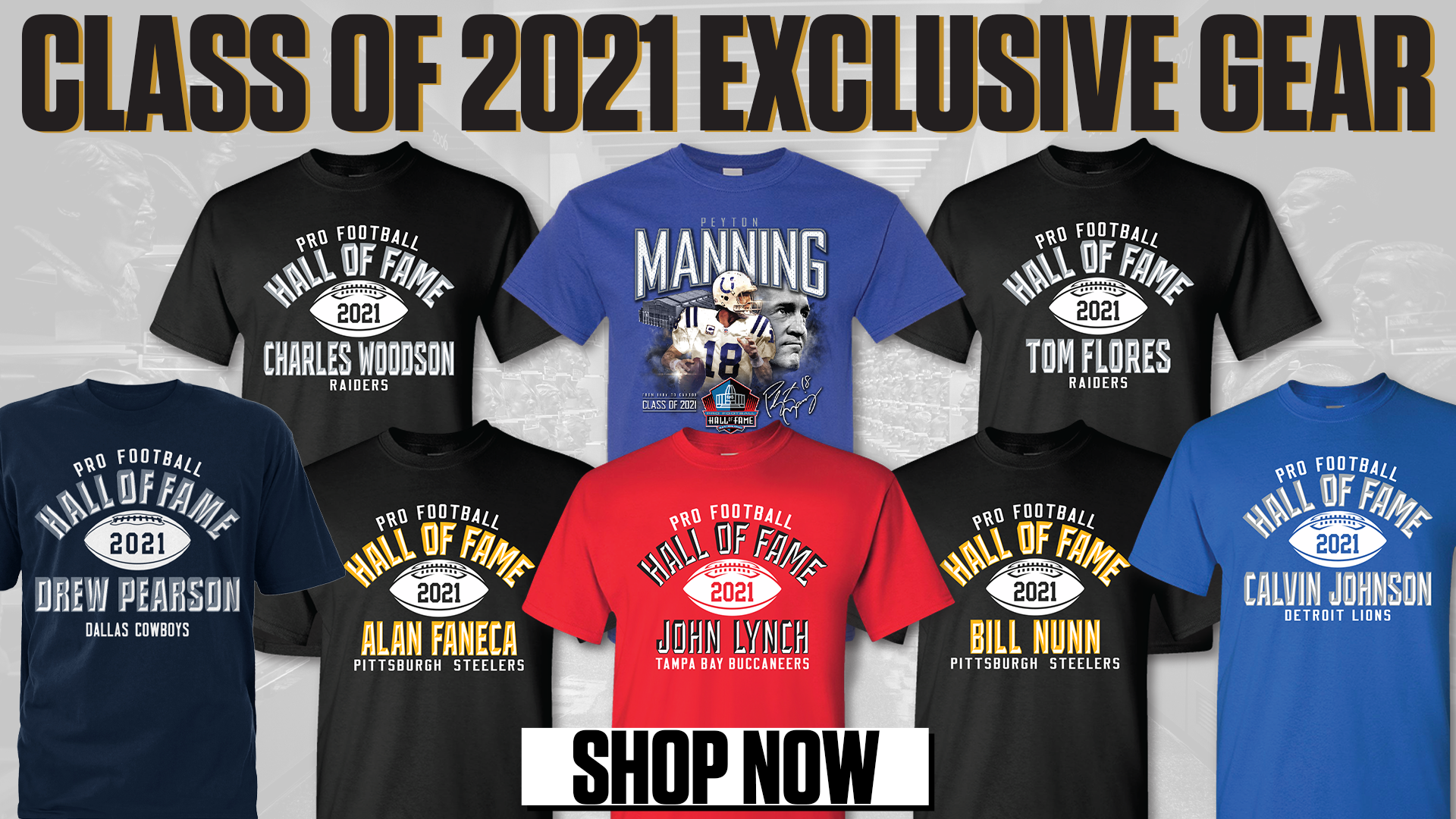 The Coach Finalist, Contributor Finalist and Senior Finalist were voted “yes” or “no” for election at the annual selection meeting and needed at least 80% support from the Committee to be elected. The Modern-Era Finalists were trimmed during the meeting from 15 to 10, then from 10 to five. They, too, had to receive the same 80% positive vote as the Coach, Contributor and Senior Finalists when they were voted “yes” or “no” to earn election to the Pro Football Hall of Fame.

The Hall of Fame’s membership, including the newly elected Class of 2021, now stands at 354.

The Hall of Fame Game, two Enshrinements and the Concert for Legends will be held in the world-class Tom Benson Hall of Fame Stadium. The venue is a key component of Johnson Controls Hall of Fame Village under construction on the Hall’s campus.

More than 130 Gold Jackets (living Hall of Famers) return to the Hall of Fame each year to be part of Enshrinement Week Powered by Johnson Controls. Nowhere else are fans able to see and interact with as many Hall of Famers in one place at one time as in Canton during the annual celebration.

Official Ticket Packages for the 2021 Pro Football Hall of Fame Enshrinement Week Powered by Johnson Controls are on sale from Hall of Fame Experiences. Head to www.HOFExperiences.com to secure your spot to see the Class of 2021 enshrined. Ticket packages also can be obtained by calling 844-751-0532. Packages range from single-day offerings to four-day experiences that include premium seating, VIP access, exclusive parties and more.

Individual tickets for the Class of 2021 Enshrinement, Gold Jacket Dinner and Concert for Legends will go on sale in the Spring.

This week, Kramer's career becomes the focus of the Hall’s Gold Jacket Spotlight.

Eight-person class to be enshrined Aug. 8 in Canton.