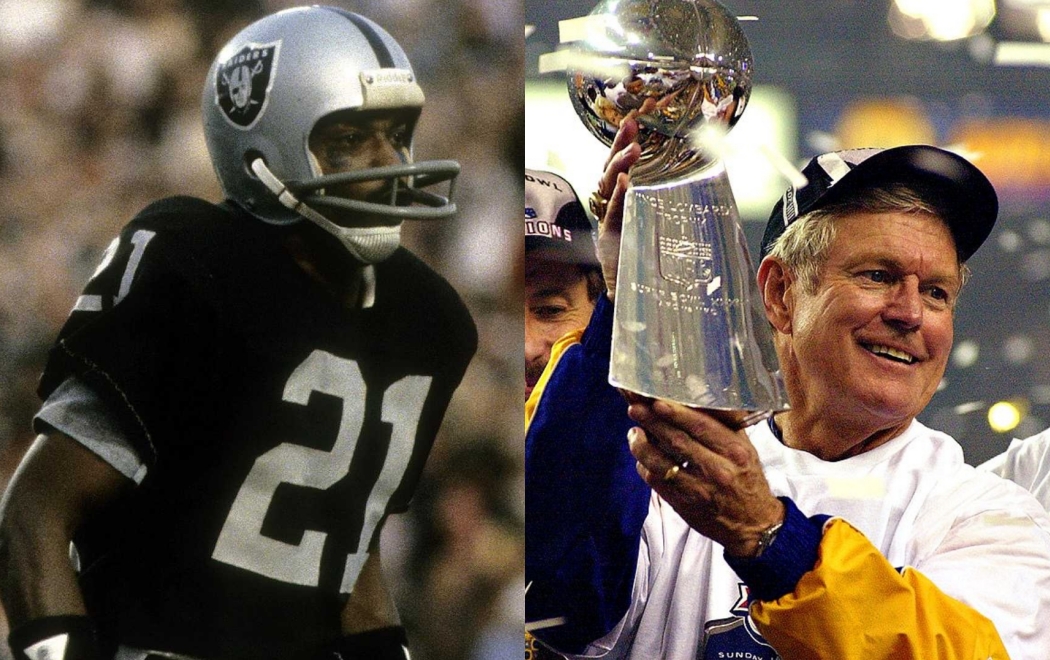 Former Raiders wide receiver Cliff Branch and 15-year NFL head coach Dick Vermeil were selected Tuesday as the Senior Finalist and Coach Finalist, respectively, for the Pro Football Hall of Fame’s Class of 2022. A panel of Hall of Fame Selectors met virtually to make the selections.

Branch, a 5-foot-11, 170-pound speedster, is credited with stretching opposing defenses over 14 seasons in the 1970s and 1980s, helping teammates FRED BILETNIKOFF and DAVE CASPER to put together their own Hall of Fame resumes. In 183 career regular-season games, Branch caught 501 passes for 8,685 yards (17.3 yards per catch) and 67 touchdowns.

“Cliff Branch changed the game,” Mark Davis, principal owner of the Raiders, said upon receiving a congratulatory phone call from David Baker, President & CEO of the Pro Football Hall of Fame. “Safeties had to be aware of him.”

Branch was especially dangerous in the playoffs. In 22 career postseason games, he caught 73 passes for 1,289 yards (17.7 average) and scored five touchdowns.

A three-time Super Bowl champion, Branch led the NFL in touchdowns twice and eclipsed 1,000 receiving yards twice. He led the league with 1,092 receiving yards and 13 receiving touchdowns in an All-Pro 1974 season. Overall, Branch was named All-Pro three times and selected to play in four Pro Bowls.

“He dreamed of this. He wanted this so bad, he could taste it,” Cliff’s sister, Elaine Anderson, said in a call with Baker on Tuesday afternoon. “It was all he talked about – when he would go to the Hall of Fame.”

Vermeil had been a longtime college and pro assistant when he became head coach at UCLA (1974-75). He used a 15-5-3 record there as a springboard to the head coaching job in Philadelphia. His ability to reconstruct the culture of the long-struggling franchise produced a winning record and playoff appearance by his third year.

“I am overwhelmed. I’m not sure I belong there,” a humble Vermeil said of the Hall of Fame upon hearing the news of his Finalist status from Baker. He said the Coach Committee had his “deepest appreciation and gratitude.”

The Senior Committee, comprised of nine members of the Hall of Fame’s Selection Committee, considers players whose careers ended at least 25 years ago. The list of eligible 2022 Senior candidates initially was reduced to a list of 16 Nominees. Then five of the nine members (determined on a rotating basis annually) met to discuss each of the candidates. A series of reduction votes preceded additional discussion and the selection of Branch as the Senior Finalist.

The Coach Committee, also comprised of nine members of the Hall of Fame’s Selection Committee, considers coaches whose careers ended at least five years ago. The list of eligible candidates for the 2022 Coach Finalist initially was reduced to seven names for discussion.

To be elected to the Hall of Fame, Branch and Vermeil must receive 80% voting support by the entire 49-member Selection Committee when it meets early next year (on a date to be determined) in advance of Super Bowl LVI. The Selection Committee will consider 18 finalists: the Senior (Branch), the Coach (Vermeil), a Contributor (to be named Tuesday, Aug. 31) and 15 Modern-Era Finalists (to be determined from a preliminary list announced in September, trimmed to 25 Semifinalists in November and to 15 Finalists in January).

Current bylaws call for a class no smaller than four nor larger than eight. Branch and Vermeil will be voted on for election independent of the other Finalists.

The Class of 2022 will be enshrined next summer during the Pro Football Hall of Fame Enshrinement Week Powered by Johnson Controls in Canton.

Derrick Henry’s level of dominance is setting him apart in today’s NFL.

Gold Jacket Spotlight: The Idol of Other Idols, Roger Staubach

Roger Staubach steps into the Gold Jacket Spotlight this week.