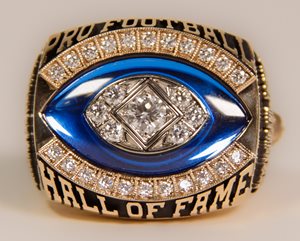 During the “Monday Night Football” matchup between the New England Patriots and the Chicago Bears, Seymour will receive his Ring of Excellence. Hall of Fame Chief Communications & Content Officer Rich Desrosiers will be on hand at Gillette Stadium for the ceremony. The game is set to kick off at 8:15 p.m. ET.

All three representations of membership in sports’ most exclusive club will be displayed during the special presentation for Patriots fans to pay tribute to Seymour.

The outer diamonds create a “stadium” effect surrounding the football-shaped diamond center.
The vibrant blue gemstone was selected both for appearance and meaning, as blue is often associated with confidence, power and integrity – all traits of these incredible, legendary football icons.

Seymour’s Hall of Fame Ring of Excellence is customized to reflect his unique career. A likeness of his Bronzed Bust, along with “Defensive End-Tackle” and “2001-2012” (his years in the NFL), appear on one side, while “Seymour,” the Pro Football Hall of Fame logo and “Class of 2022” are included on the other.

Additionally, a special arbormark (or engraving) appears on the inside of the ring – 360 – which is his Enshrinee number.

To help look ahead to Week 7 of the NFL schedule, joining The Mission is New England Patriots Legend Ty Law, a member of the Pro Football Hall of Fame’s Class of 2019.