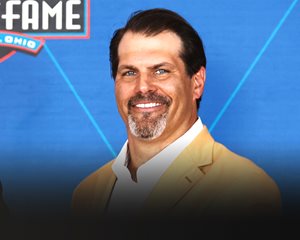 Throughout the ’22 NFL season, the vision of "The Mission" podcast is to connect viewers and listeners with Hall of Famers, to help break down some of the league’s primetime matchups, historical matchups and current news storylines and to learn about the treasured life lessons the game of football has taught these gridiron warriors.

To help look ahead to Week 10 of the NFL schedule, joining "The Mission" is Seattle Seahawks and Minnesota Vikings Legend STEVE HUTCHINSON, a member of the Pro Football Hall of Fame’s Centennial Class of 2020.

During his rookie season, the former All-American from the University of Michigan started all 16 games at left guard on a line that helped clear the path for running back Shaun Alexander to rush for 1,318 yards and 14 touchdowns. Hutchinson’s hard work earned him All-Rookie honors.

Watch and listen as Hutchinson breaks down his former teams’ Week 10 matchups and shares his thoughts on the contributions that the 21 offensive lineman who make up the 129 Modern-Era Players nominees for the Pro Football Hall of Fame Class of 2023 and so much more!

Click here or watch below for the full podcast and to learn the code to receive a 25% discount in the Pro Football Hall of Fame store.

The 1972 Miami Dolphins celebrate the 50-year anniversary of being the only “perfect” team in NFL history.

The NFL has announced it will honor Pro Football Hall of Famer John Madden with the "John Madden Thanksgiving Celebration," beginning this year.