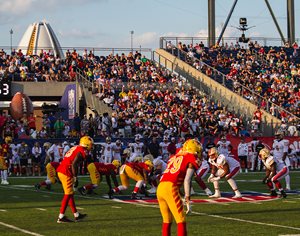 The USFL and Hall of Fame Village announced Wednesday that Tom Benson Hall of Fame Stadium in Canton will be the host site for multiple league games during the upcoming season, according to the USFL.

Two teams will practice and play games at the stadium, where the North Division Playoff Game (late June) and the USFL Championship Game (early July) will also be held.

"The USFL is excited that the Pittsburgh Maulers and the New Jersey Generals will practice and play games in Canton during the 2023 regular season," said Daryl Johnston, USFL Executive Vice President of Football Operations. "The outstanding regional support we received during our first postseason from football fans in Ohio and Pennsylvania, including the great city of Pittsburgh, coupled with our successful partnership with the Hall of Fame Village, led to this moment."

The Maulers and Generals will play the first regular season game in Canton on Sunday, April 23.

The USFL is the first major professional spring football league in nearly 40 years to complete a successful inaugural season and return for a second season. During the USFL’s 10-week regular season in 2022, all eight teams were hosted by the city of Birmingham, Alabama. Last June during the playoffs in Canton, the league announced it would expand into more markets for the 2023 season. In addition to Canton hosting the Maulers and Generals, the USFL previously announced that the Birmingham Stallions and New Orleans Breakers will be hosted in Birmingham, and the Memphis Showboats and Houston Gamblers will be hosted in Memphis, Tenn.

"In 2023, the USFL is proud to bring high-quality and competitive professional football to Canton, Birmingham, and Memphis," said Johnston. "We couldn’t be more excited for the kick-off of USFL Season 2 in April."

For more on this announcement and to get ticket information, visit theUSFL.com.

The 2023 USFL regular season will have another location for games this season: 📍 Canton, Ohio pic.twitter.com/YM2f7nqMn1

Gold Jacket Spotlight: Bill Cowher ‘even looked like a Steeler’

A recent installment in the Pro Football Hall of Fame’s “Heart of a Hall of Famer” series took place in Duval County, more specifically Baldwin Middle-Senior High School, with the only Hall of Famer who played for the Jacksonville Jaguars — Tony Boselli.