"The game was played in the middle of the field when I broke in and the center position had some glamour to it." 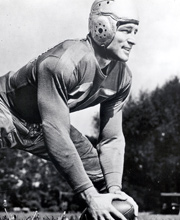 Wojciechowicz was the Detroit Lions number-one pick in the 1938 National Football League Draft and won the starting center job in his first game as a Lion. During his years in Detroit, the Lions slipped from being one of the NFL’s strongest teams to one of its weakest. But Wojie, as he was called, always played at a championship caliber, excelling on both offense and defense.

A popular player, he was often the comic relief on the football team, the kind that every team likes to have around. On the field, however, he was all business, one of the last of the "iron men" of football, a center on offense and a sure-tackling linebacker with unusually good range, on defense.

In 1944, he demonstrated his defensive talents when he intercepted seven passes, a Lions record for several years. Although Wojciechowicz received his fair share of personal recognition, he yearned to play on a championship team. That never happened in Detroit. But when he was traded to the Philadelphia Eagles in the middle of the 1946 season, the two-time All-Pro selection joined a team that seemed poised to deliver him his dream.

A revitalized 30-year-old Wojciechowicz immediately became the nucleus and ringleader of a formidable Eagles defensive platoon. His veteran leadership and dogged determination made him a major contributor to the Eagles’ championship runs in 1948 and 1949. From the time he was picked as Detroit's number one draft choice in 1938 until he retired in 1950 after 13 seasons of pro football - one season for every letter of his surname – Wojie was a football player's player, one of the best the game has seen.

The Honorable Mayor, of Canton, ladies and gentlemen. It’s quite an honor for me to present two years in succession, two men that played on our Eagle football team in one position. Just think of that, in one position. And both of them were defensive centers, although Chuck Bednarik, in the year they won the last championship, played both ways, he played 60 minutes of football.

Wojie, went to school at Fordham, and he was one of the seven blocks of granite of that famous football team which was coached by Jimmy Crowley. In 1946, I got Wojciechowicz, but early in that year, I played the Washington Redskins. And "Bones" Taylor, at left end, made three touchdowns against us. We won the ball game by the score of 45 to 42 which pitching battle between Thompson and Baugh. Later in the year, after I got Wojciechowicz, I put Wojciechowicz right in front of "Bones" Taylor, and from then on, he never caught even a pass, not a reception of one pass. It was through Wojciechowicz, Alex, as I would call him, after I received him in '46, of course, we didn't have much chance to win the Eastern Championship at that time.

But in "47, we won the Eastern Championships, the Championship, and in '48 and ‘49, we won the National Championship. Wojciechowicz was the defensive center at, through those three years of which we won the Eastern Championship three times and the National Championship twice. And I believe as truly as I'm standing here that it was through Alex that his defensive work, although he did not play the same defense as our full-back did, because we had to use him in a zone. But he stopped the men at the line of scrimmage, and that’s the way I stopped Brick Moller, and Brodie Stevens at, in the Rose Bowl with the same technique. We were champions, of course, and in 1948 and 49, and later in 1950, after we had lost three great half-backs, we led the league after the Browns beat us very badly in the first ball game.

We led the league for six ball games, and it was through the defensive ability of our football team that kept us on top. We then lost five games by the total of 18 points. In the ball game against the Bears, an exhibition game at the Municipal Stadium, Wojie had two teeth knocked out on one tackle. Linsclod and Bednarik was injured at the time. Wojie stayed in the ball game and played the whole 60 minutes, both offensive and defensive. Although he’s still minus two teeth, why' a there’s false ones put in place of them. This is about all I could say about Wojie, it’s a now fitting and proper, and it gives me a great honor to present to you, Alex Wojciechowicz. Thank you.

This is the fulfillment of a dream. I cannot accept this great honor without expressing my thanks to a few of the many who made this day possible. I venture to say that none of us would be here today unless we had proper guidance and leadership.

I was blessed with three great men. My high school coach, who is here today, William C. Denning, from South River; my college coach, who’s also here today, “Sleepy " Jim Crowley; and the man you just heard, installing me into the Hall of Fame Earle ''Greasy'' Neale. I also want to thank the Board of Selectors.

It is indeed a thrill and a thrill of a lifetime to join the past and the present immortals who have done so very much for football. I feel immortal and I'm deeply grateful. Thank you very much.