"I think the creative and innovative coaches are the ones who are introspective; ones who like to develop their ideas; ones who take a look at all the equations and want to find the right answers.” 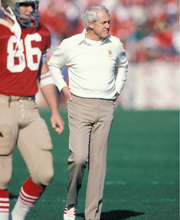 But Walsh was up to the challenge and in just three years provided the 49ers with their first-ever National Football League championship with a 26-21 victory over the Cincinnati Bengals in Super Bowl XVI. It was the first of a great string of successes for Walsh.

In his 10 seasons as head coach of the 49ers, Walsh compiled an impressive 102-63-1 mark that included 10 wins in 14 postseason games. Under Walsh, the 49ers won six NFC Western Division championships and NFC titles in 1981, 1984, and 1988. Those NFC titles were followed with victories in Super Bowls XVI, XIX, and XXIII which made the 49ers, by every measurement, the NFL team of the 1980s.

Bill began his pro coaching career as an assistant with the Oakland Raiders in 1966. He then served with the Cincinnati Bengals from 1968 to 1975 and the San Diego Chargers In 1976. While he was still an assistant coach, Walsh developed the reputation for being a superb offensive coach who specialized in the passing game. He is credited with shaping Ken Anderson of the Bengals, Dan Fouts of the Chargers and Joe Montana of the 49ers into outstanding quarterbacks.

Our deepest congratulations to today’s inductees and the inductees from the past. Bill Walsh became head coach of the San Francisco 49ers 14 ½ years ago, from that point forward, the franchise, its fans and my life would never, ever be the same. The decade of the 80s suddenly became a magical adventure which was filled with mystery and excitement. It seemed as though a favorable spell was cast upon the 49ers that allowed us to enjoy great success and at the same time avoid many adversities. Bill Walsh the master magician who conjured up this incredible situation. What Bill achieved is not only well known but has become the standard by which coaching careers are now judged. His style of leadership included the amazing ability to introduce innovative techniques without destroying traditional concepts.

His role as a visionary never caused him to ignore the present. Bigger was not necessarily better to Bill, nor were the strongest always the best. He emphasized the fact that personal motivation was as important as physical gifts and that the mind and sole deserved as much attention as the body. Much has been made of various labels that sports experts attached to our new Hall of Famer. We have heard him referred as the intellectual, scholarly and of course, the genius.

Notwithstanding the many efforts to categorize Bill's technique. The bottom line is very simple. He always was able to see the big picture while handling the daily details. Bill and I have a relationship that has been spiced over the years with plenty of laughter and certainly our share of tears. A special moment in time was created that would be referred to as a modern day's Camelot. Fortunately, I can now refer to that white hair crusader who made it all possible as my deep and dear friend. Ladies and gentlemen, it is with great honor that I present to you the 49er for all season, my good friend, Bill Walsh.

Wellbeing last on the rostrum I think I maybe can capsule a lot of the things that people have been saying. I can remember my first visit I was awed I sat right up there we were here to play the Cincinnati Bengals, play the game, and I was awed just to see this facility, just to see the stadium and be part of the game just as an assistant coach. Later I brought the 49ers here and sat right over here and watch the introductions. My picture at one point was in this Hall as the head coach of the 49ers and I told people about it, I'm in the Hall of Fame never thinking that someday I would actually be enshrined in the Hall of Fame. And I tell you it is an amazing, amazing history that can occur in a person's life.

Obviously, I want to introduce my family and I am going to half to read it because this is sort of an emotional time, my mother, Ruth; my wife, Geri, my son Steve, my daughter Elizabeth, my son Craig and his wife Kim and, of course, Norm and Jackie Flori, Geri's sister and brother-in-law. And, of course, I would like to quickly name off some of the people who have really made a difference in my life in a coaching standpoint. Dick Vermeil, who is here, was a college classmate and, of course, his intensity was unbelievable. I worked for Bob Bronson at San Jose State and, of course, people in Cincinnati when I worked there said how wonderful you went to school in Mexico.

Well San Jose State happens to be in California and Bob Bronson who was a brilliant tactician 10, 20, 30 years ahead of his time. Marv Levy was an organizer and had a chance to work with him at Berkeley. John Ralston had all the energy and intensity any coach could ever have with great success. Al Davis was on the cutting edge when I was with them. Paul Brown the master of the National Football League and, of course, Tommy Prothro when I worked with Dan Fouts at the Chargers. These are some people that really made a difference. I would also like to salute one of my dear friends, Jim Finks. Walter already mentioned him. Jim is a legend in the NFL, and I am sure at some point he will be enshrined here himself and he has really been the master of league. So those are the kinds of things that naturally you would like to talk about in introduction.

But let me just tell you the real basis for the National Football League. We went to San Francisco, Ed DeBartolo and myself, two guys who really had a lot to win. Ed DeBartolo Sr., who is here, Bill Moses were really partners with us developing the franchise. I was the fifth coach in just a matter of years trying to find the right formula, but we found it. In three years, we found it. The first year I was sure we would win our share. We won two and lost 14. And believe me when you go through that you sole search. The next year there were posters all over the city because we won our first three games. We won our first game on the road in 27 tries in San Francisco. One out of 27, I was proud of it, roaring back only to lose the next eight games in a row. Now in loosing those eight, the key one was the last one.

We went down and played Don Shula, bless his heart, and that team an~ at that time, I think Don is here today, isn't he? I think at that time Don was on the competition committee and those were the people who picked and chose the officials. We had lost eight straight games, the game progressed, and Don needed a remark made, an observation he would wave and over would run Jim Tunney. · They would discuss it and I would be on the far side of the field. Later in the game another question, he would go right over, I would try to get their attention, no way. Well, believe it or not we had the game down if we kick a field goal, we would tie the Miami Dolphins, maybe have an overtime game. We kick it, 15-yard penalty in those days, holding, well okay. We kick it again, 15-yard penalty holding. I looked over at Don and he was just shaking his head, he couldn't figure out how this could happen.

We through a pass completed it for' the obvious first down when the ball was placed it was placed back conveniently about a foot, we lost that game. But on the plane home, by that time I was the only person in the first class section, the entire squad and coaching staff was in the back of the plane and I am sure the pilot had to calibrate it to have it fly level. Everybody was towering in the back. I looked out the window for five hours in the middle of the night because I broke down emotionally. I had conceded I could not get the job done. 14 loses the first year, eight straight the next year. When you lose 8 straight you don't think you will never win again. Eight straight loses, I had conceded it when I got off the plane I will finish the year out and I will go to Ed Jr. and will talk to him about maybe being in some form of management for him because I had brought it this far and I can't get it all the way. Well we won the next game and we won the next game and we won the next game and the next year we were World Champions. So, in three years we turned the whole thing around.

Now we have some San Francisco 49ers here today and if the 49ers would please stand up. Now we are 2500 miles away, but we got some, I see Randy I see all kinds of people, please stand up would you please do it for me. Here we are. Now we are from 2500 miles away from a different city as you know and at one-point San Francisco was in the absolute doldrums moral wise, all kind of things. There had been an assassinate of the mayor and the city was in the doldrums and the city was ridiculed by many people. Well after three years we had a victory parade through Market Street. We turned the corner and there were 300,000 people and my point is there were older people and there were younger people, there were black people, white people there were Asian people, there were rich people and rather poor people.

There were people of every gender, every interest. All of a sudden the City came together, the City became San Francisco again, the City became a World's Champion for the first time and all those kinds of things were forgotten and minimized because we had with the San Francisco 49ers turned an entire state around and a huge and great City around because of professional football. We had more impact than you would ever think on our young, on our old and the way people feel about themselves, each other and their city. So, in our partnership with Ed DeBartolo and myself, a great group of people some fine coaches, we became World's Champions and we continued to be World's Champions for four Super Bowls in the eighties. Well, I have heard about great teams today, but we will play anybody I will guarantee you.

Well, with the 49ers, I am sure with the Steelers, I am sure with the Dolphins and all other ball clubs, the players play for a group of people about 15 yards away. That is the rest of their team. They are just a few yards away and they look over at each other, one group is sacrificing at that moment, the next group will go out there at the next moment. So, you will find the players who play for their families their love ones, that they are playing for each other that they will sacrifice, they will do anything for each other. And I take great pride in that part of it because I think the 49ers here today demonstrated all of the championship teams represented here to develop it and we represent each other, we played for each other, and we cared for each other and that is championship football. It is a pleasure to be here. Thank you very much.