"To me, defense is perpetual motion. You've got one primary objective: get to the football." 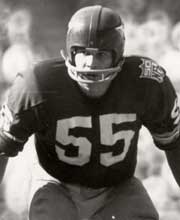 The Washington Redskins picked North Carolina linebacker Chris Hanburger in the 18th round of the 1965 NFL Draft. The All-American started to make his mark late in his rookie season as he began to form a reputation as a player who made big plays. Soon thereafter he assumed the role as the “quarterback” of the Redskins' defense while becoming one of the most dependable and steady linebackers of his era.

He was an integral part of the dominant Redskins teams of the 1970s. At the same time Washington was rising to the top of the NFL, Hanburger began earning national acclaim. He was selected first-team All-Pro four times in a five-season span from 1972 to 1976 and named All-Eastern Conference in 1968 and 1969 and All-NFC six times in seven seasons from 1970 to 1976. Hanburger also was voted to nine Pro Bowls in his 14-season career.

His performance in the 1972 season gained him perhaps his greatest accolades as he helped lead the Redskins to their first Super Bowl berth. He recorded numerous game-changing plays throughout the season as Washington won the NFC East with an 11-3 mark. He shared the team lead with a career-high four interceptions, which he returned for 98 yards. That total included an interception of a Joe Namath pass that he returned 41 yards for a touchdown in Washington’s 35-17 win over the New York Jets on Nov. 5.

His strong play continued into that year’s postseason as the Redskins downed the Green Bay Packers 16-3 in the divisional playoff before facing the division rival Dallas Cowboys in the 1972 NFC Championship Game. Hanburger pitched in with two tackles and six assists as the Redskins routed the Cowboys 26-3. He added another strong game in his only Super Bowl appearance when he recorded four solo tackles and assisted on two others in a 14-7 loss to the Miami Dolphins in Super Bowl VII.

In all, Hanburger recovered three fumbles for touchdowns, which stood as an NFL record at the time of his retirement following the 1978 season. He also had 19 career interceptions for 347 yards and 2 TDs.

(at time of his retirement following 1978 season) 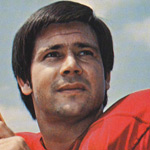 Chris Hanburger (presenter):
He came back from a weekend trip. I think he may have been visiting my mom. And when he got back to campus, some of his friends came up and said, "Hey, you've been drafted by the Washington Redskins," and he had no idea.

Narrator:
And so, without any fanfare began the NFL career of Chris Hanburger, an 18th-round draft pick out of the University of North Carolina. Over the next 14 seasons from 1965 to 1978, the linebacker did not miss a game for the Redskins. He was selected to nine Pro Bowls, still the most in franchise history.

Hanburger:
My dad's nickname when he played was "the Hangman," and he was an arm-tackler. He would come around and blindside quarterbacks. And then to see him come flying around the end, and the poor quarterback has no idea where he's able to put his arm out and basically try to rip the helmet right off the guy.

He played with a tenacity and a quickness that I think a lot of linebackers did not have at that time. They didn't have the speed that he had to be able to stay in the game pretty much every play. Cover people out of the backfield. Make tackles at the line.

Narrator:
In Washington, Hanburger would direct traffic for George Allen's fabled "Over the Hill Gang."

If a phone call came on a Friday night at a certain time, he didn't even need to say hello. He would just say, "Hey, coach." And he knew that George Allen was calling to talk about something that was going to happen, or something about the opposing team that was coming up that weekend.

Looking back, I guess there are moments where I wish I did get to see him play live. I was 5 when he retired, and my mom actually had a policy of actually keeping the kids out of the room when dad was playing. So my sisters, while they may have wanted to watch their dad play, they weren't allowed to. And I know he was a tough guy from growing up with him, but seeing him on film, it really brought out that he was an exceptional player.

Narrator:
For this performance the son is center stage with his father.

Hanburger:
I don't think I could be any happier. I hope it shows. I mean, this is a great day. I've always known, and my sisters Jay and Kelly and my mom, we've always appreciated what my dad accomplished on the football field. We've always said, "Dad's a Hall of Fame dad." Now he gets to be appreciated for being a Hall of Fame football player as well. And now we get to tell everybody about how great he was.

Dad, you make me incredibly proud to be your son. I don't know if words can put into account of how much I love my father. He is a great man. He is a great person. He has taught me things and shown me a path for life that is just one of character and discipline and doing the right things and working hard. And those are qualities that everybody should know and everybody should have and they are so basic. They're the blocking and tackling of life. 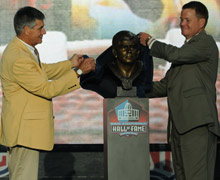 I am honored to present my father, Chris Hanburger, for enshrinement into the Pro Football Hall of Fame.

Chris Hanburger:
I'll tell you one thing, I brought that boy (son, Chris Hanburger) up right. That's for sure. Before I get started, it's hard for me to see at my age, up close and far away, but there are some guys that I played with out there, I think. I can see one of them because he's got a full head of gray hair that attracted my attention. That's Billy Kilmer. There he goes.

Ron McDole, the dancing bear defensive end, and I think Brig Owens might be out there. There he is. And I'm not sure about Pat Fischer; I think Pat was coming. And Larry Brown; I don't know if he made it. There he is. Thank you, guys.

This is something that I never gave a thought to, and I'm most appreciative of it. When it all got going, we were told that we had six to eight minutes, and I don't think anybody's going to tell Richard Dent not to exceed that.

But I got to thinking about this when I realized where my finances were bringing my children, their families, my grandkids and everybody else up here. I thought, well, you know what? I think I'll try to sell some of my time.

I knew Richard Dent was out, because if I upset him, I was dead. Marshall Faulk was out because he walks around with his phone texting and Twittering and whatever else all day long. And I realized that there were two other guys that do a lot of talking on TV and everything else. I figured Shannon Sharpe would be the easiest guy to start with. I closed him real quick, put a wad of cash in my pocket.

I went to the last guy, Primetime, he told me I had to go talk to his agent (laughing). And I told him I don't talk to agents. The next thing I know, he's doing all this stuff (body shakes) and trying to get a discount. I'm only kidding, but I congratulate all of the inductees for this year. These are great guys. These guys down here are wonderful.

It's been a tremendous thrill for me. I've known a lot of these guys. I've played with some of them, but I've known the names. I've never had a chance to meet guys in the Hall of Fame before like this. For me, it's a tremendous honor, just a great honor.

There is another guy out there, I believe he's here, Joe Mark. I don't know where you are, Joe, but if you're out there, please stand. There he is. This is a guy at the University of North Carolina, where I went to college, back when I was in college you could only substitute a couple of players when the ball turned over, other than that you just stayed on the field and played offense and defense, and I used to go in as a sophomore and play for the All-American receiver we had.

After that year, Coach Mark grabbed me and said, Son, you better learn how to snap the ball. You're going to play center, and not only do you have to get it to the quarterback, but you have to get it back to the punter and for extra points.

All summer I'd worked on that and never did get it down very well. But that's how I got to play linebacker, because the center became linebacker on defense. I think they were just running out of folks to grab when I got drafted. It was like throwing darts at a board and somebody hit my name and the Redskins got stuck with me.

But I want to thank all you folks for being here. I think it's fantastic. It's overwhelming for me. I had a blast in the parade today. The folks of Canton, you all are tremendous. I think the support, it's just great. I thank all the volunteers. For those of you who don't know, there's over 4,000 people that volunteer their time to help put this whole week together for all of us, and I thank them. I thank the folks from the Hall of Fame itself. They have been most helpful for all of us.

I know it's been very confusing for me. To be honest with you, I try to stay out of it and I dump it on everybody else. I don't understand the process to get in here at all. I don't know who is involved in the voting, the nominations, etc. But I can tell you one thing: I thank those folks very much. This is one of the greatest moments in my life, and I mean that from my heart.

But it's a system. It is what it is. That's why I'm just so fortunate. It's not so much what I did, by any means. I look at it as what the people around me did on the field that let me kind of try to be somewhat of a loose cannon out there, or just run around like a chicken with his head cut off not knowing exactly what I was doing.

I don't think folks here that are Hall of Famers are sitting here, I don't consider myself a true Hall of Famer. I say that because, to me, I'm an Army brat. I spent two years in the Army right out of high school before I went to college. To me, the real Hall of Fame people are all the men and women of our armed forces, all the men and women in law enforcement, and all the firefighters, men and women. These people, to me, go over and beyond making a tackle or a blitz or doing anything, completing a pass. They're wonderful people. I just ask you when you get a chance, just thank them. Two words: Thank you. That means the world to them.

But I tell you what, I am just overwhelmed by this. It's just a great time in my life. People ask me, what is the greatest thing before this happened? And I would say getting elected to the first Pro Bowl, because back then the people you played against voted you in, and to me that was just the ultimate honor.

But this takes the cake, folks. Thank you so much for being here. Again, thank you. It's the greatest thing in my life right now.