"We enjoy playing football and we fight as hard as we can for our own self-respect. And in the back of our minds is the knowledge that we are earning our living because we are good football players. So we’ve got to keep on being good.” 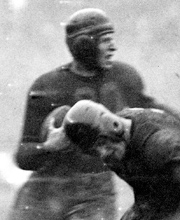 Cliff Battles, a sensational running back from West Virginia Wesleyan College won the National Football League rushing title in 1932 as a rookie with the Boston Braves. The next year the Braves were renamed the Redskins and Battles became the first player ever to rush for more than 200 yards in a game. He accomplished in the feat on October 8, 1933 in a game against the New York Giants as he rushed 16 times for 215 yards, and scored one touchdown.

In 1937 Redskins George Preston Marshall moved his team from Boston to Washington. He brought Battles, the NFL's premier running back, with him and quickly added a sensational rookie passer, Sammy Baugh. It didn't seem out of the question that the Battles-Baugh ground and air threat would make the Redskins championship contenders for years to come. For the 1937 season, Baugh and Battles combined their talents just as everyone had anticipated. On the season’s final day, Battles scored three touchdowns to power the Redskins to a 49-14 win over the New York Giants for the Eastern Division title. Against the Chicago Bears a week later, Battles scored the first touchdown in a 28-21 victory that gave the Redskins their first NFL championship.

Battles was again the league’s leading rusher and he won all-league honors for the fifth time in six years. In just six seasons, Battles totaled 3,511 yards rushing – really big numbers for that era – and Redskins fans looked forward to more of the same in the upcoming seasons. With Battles carrying the ball and Baugh tossing it, championships seemed assured.

But it was not to be. Inexplicably, Marshall, who had paid Battles $3,000 a year, starting with his rookie campaign, refused to consider a raise, even though Cliff clearly was a star player with much fan appeal. After the season, the exasperated Battles accepted a $4,000 job as an assistant coach at Columbia University. The Redskins won only one more championship during Baugh’s long and storied career. Loyal Redskins fans were left to wonder, “what might have been” if Marshall had only given Battles a raise. 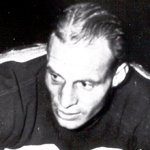 Drafted: Battles played prior to the NFL Draft being implemented.

Mr. Mayor, Mr. Commissioner, Hall of Famers, their families and friends. It's a great personal joy to me to be here in Canton today to witness the enshrinement of the greatest running back in the three-and-a-half-decade history of the Washington Redskins. One of the great running backs of all times, Cliff Battles of West Virginia Wesleyan. A great athlete, a complete gentleman, an honored citizen of his adopted town, Washington D. C. I'm proud to say also that he's a warm and gracious wonderful friend. Cliff, along with his co-Hall of Famers, Wayne Millner and Sammy Baugh, led the Washington Redskins to the World Championship of football in 1937. Twenty-four times a game he carried the ball, and on one never-to-be-forgotten day, Oct. 17, of 1937, he went 75 yards, 71 yards, and 60 yards for touchdowns against the Pittsburgh Steelers. And then just a couple of weeks later, he repeated that, he did an encore, in the Eastern Division Title game against the New York Giants. He left football at the top of his career, as a world champion, and he's always had the hallmark of a champion about him, because he's had a fierce pride to be the best that he could be at every single moment under all circumstances everywhere that he performed. I think it's only fitting that the world of sports should salute him here today at the Hall of Fame, at a place so close to the city of his birth. I would like to say to Cliff, the words of an old "gaelic toast'', as he is enshrined in the Hall of Fame on what is a memorable day for him, and his family. Cliff may the winds be always at your back, and may the road continue to rise up to meet you, and may the good Lord hold you always in the hollow of his hand.

Thank you very much, Ed. I'm indebted to so many people for being here in the first place, and now I'm indebted to so many more for making this such a memorable occasion. I consider it a very high honor to be invited to join those illustrious names already enrolled in the Hall of Fame. And to my friends and relatives, many of whom are here at great inconvenience. May I say that your presence here and your warm wishes has made this for me "Football's Greatest Weekend.” Thank you very much.