"They talk about the bump-and-run nowadays. Heck, we had that with one difference. A defender didn’t bump you, he knocked you down.” 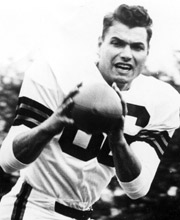 Dante Lavelli, a quarterback in high school and a halfback as an Ohio State freshman, was switched to end by Buckeye coach Paul Brown before his sophomore season. Yet, when Dante joined the newly formed Cleveland Browns in 1946, injuries and a long stint in the U. S. Army had limited his college experience to just three games.

To make the Browns, he had to beat out four more experienced and highly regarded candidates. But Dante not only prevailed, he led the league in receptions and won All-AAFC honors in his rookie season. He also caught the winning touchdown pass in the first AAFC championship game between the Browns and the New York Yankees.

There were many more high moments in Lavelli's career. He was All-AAFC again in 1947 and, when the Browns moved to the NFL, he was all-league twice more and a starter in three of the first five Pro Bowl games. In the 1950 NFL Championship Game, Dante caught 11 passes, then a record, and scored two touchdowns as the Browns edged the Los Angeles Rams, 30-28.

Lavelli was a favorite target of the Browns’ great quarterback, Otto Graham. All but 20 of Dante's 386 career receptions came while Otto was at the Cleveland helm. Like any great pass-catch team, the two spent long hours learning the other's every habit. Dante was a dedicated pattern-runner but once there was a hint things weren't going right, he preferred to take off down the field and yell for the ball. More than once, his penetrating voice provided a homing signal for Graham and the combination clicked for a long touchdown. What set Lavelli apart from all other receivers were his great hands. When Dante went up for a pass in a crowd, you could be sure "Gluefingers" would come down with the ball.

Mr. Chairman, ladies and gentlemen. May I say at the outset, little did George Halas or Paul Brown ever realize that the Hall of Fame as we know it today would develop into the wonderful institution that it is. I took that ride this morning in the parade and most of you have never had this privilege, but there is a reason for Canton being what it is in the world of football. You see all those small children and the people just seated there, to take a look at football players and football folklores. There is no mystery about why this is the center of the very heart of our football existence and you built the Hall of Fame and all we did was put it where it belongs. And I, too, have a candidate that maybe isn't an apolo but he could be a madonna. It is my privilege to present to you one of my former great players for induction into the Hall of Fame. I am a fortunate man in that I, was the coach and many years later I had football players that I was associated and coach-player relationships and still had the feeling that I was a part of their existence and it is a very comforting thing to feel this way. Makes me feel that it is all worthwhile.

I first met Dante Lavelli when I recruited him to go to Ohio State from Hudson, Ohio. His father was a local iron welding working gentlemen there, we met the family and he had great foot speed and at that time I did not know what a super catch of the ball he turned out to be. We knew he could catch the ball; he was a running back. In our national championship game our team in 1942, and then went to war like all of us did at the time and as a result he missed two or three years of his college existence. He was gone long enough that when he came out five or six years had elapsed, and he was ready to make a living. And, he took him into professional football, with the understanding that he would get his degree and he did.

He was probably the ultimate in the All-American boy, the young man didn't smoke or drink. He was the epitome of kind of a person you would want to raise to be your son and he became very special to me. He was happily married then to his wife, Joy, a very beautiful serene lady and they have a wonderful family. He has been a credit to us not only in football but as a person and as I said many times, he was just as good from, within as he looks on the outside. He is joining some real great players here in going into the Hall of Fame. I must say to you that I have had contact one way or another with all of them. They belong here. They are not only good enough as players, but they represent the kind of people that should be so honored. Today I am sure they will never forget; I know it is the highlight of my existence when I was privileged to go through. With that much of a background on Dante, I am really saying that in conclusion he was a great touch football player that helped us win big games and he is worthy of the honor you are bestowing on him today and to him I thank for allowing me to be the man to present as a member of the Hall of Fame in Canton, Ohio. Thank you.

Mayor, fellow enshrinees and football fans. This has been no ordinary day, nor has it been no ordinary year for me. I have heard from so many fans, close friends and fox-hole buddies from 30 years ago from all over the country that it is too bad that all of you out there can't have the same wonderful feeling that us four fellows have up here today. An honor of this magnitude is never achieved without the help of so many others. At this time, I would like to thank all those people who have been associated with me in my athletic career. From my old friends in Hudson, Ohio, my 34 classmates in my high school, my college and pro coaches and above all my Cleveland teammates.

I would like to take time out to thank my mom and dad for catching the boat that brought them to this wonderful country of America. And I would just like to say that my dad is here, he is 90 years old, and he is standing over here. Just like George Connor and Rosey said, my mother is smiling up there somewhere. I would like to thank my sister, Edith, who played catch with me in my younger years, my wonderful wife, Joy and my three children who gave me my inspiration and who sacrificed when I was not home much in my playing days. And then I would like to thank the great fanatics in Columbus, Ohio, the great football fans in Cleveland and rest of Ohio for cheering me on to greater achievements. My lifelong friend that I have made through Ford has been my reward as I have received through the game of football. But the Hall of Fame honor today will be the zenith of my athletic career and in some small way I hope I can contribute some folklore to this beautiful Hall of Fame building. Now to let you in on a little secret, I want to thank Paul Brown for sending Traver Reed up to the Highway 91 in Twinsburg, OH where I was working cutting grass for changing my mind from going from Notre Dame and attending Ohio State.

Paul Brown is the man who made this day possible for me. I would like to say publicly that the one and only Paul Brown was the one responsible for my athletic success. Thanks for all your many cheers and I would like to pay a special tribute to the City of Canton and the way they have treated us this weekend. May God Bless you and may God look over us and cross our paths. Thank you.