"There’s only one thing I’ve ever wanted to do: Play pro football. Everyone seems to be made for something, and I’ve always felt that playing football was the thing I was supposed to do. I love the game.” 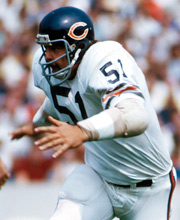 Dick Butkus possessed a desire to excel that few have equaled. He played as the Chicago Bears' middle linebacker for nine years with only one goal in mind – to be the best, and from the very start, he was just that. In his rookie season, Butkus, a first-round draft choice, had only one challenger for National Football League Rookie of the Year honors, teammate Gale Sayers. That same year Butkus was named first-team All-NFL, an honor he would record five more times. Butkus also played in the Pro Bowl following his rookie season and in each of the next seven years.

He even figured in the career statistical columns with 22 interceptions and 27 opponents' fumble recoveries. Dick had drive, meanness, a consuming desire to pursue, tackle and manhandle – anything he could do to thwart the enemy on every play. Still, he was a clean player, totally devoted to his career, a man who by his own admission played every game as though it were his last one.

Butkus had the speed and agility to make tackles from sideline to sideline and to cover the best tight ends and running backs on pass plays. He had instinct, strength, leadership and, maybe most important of all, anger. “When I went out on the field to warm up, I would manufacture things to make me mad,” he once said. “If someone on the other team was laughing, I'd pretend he was laughing at me or the Bears. It always worked for me." It was inevitable that injuries would eventually come to someone who threw himself so completely into a contact sport such as football. For Butkus, it was a serious right knee injury in 1970 that didn't respond completely to surgery. Three years later, he retired. He was elected to the Pro Football Hall of Fame in 1979, his first year of eligibility.

Butkus never played in a conference or league championship game during his career. 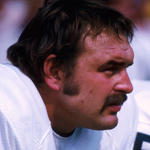 Other Members of the Class of 1979: Yale Lary, Ron Mix, Johnny Unitas

I am extremely honored to be the presenter for Dick Butkus. At the same time, I feel very sorry that George Halas, who was his coach at the Bears the entire time Dick play there, is unable to be here because I know how much it would mean to him. I do have a fine report, however, that he is coming along really well, and we do wish him a very speedy recovery.

The first play that I ever saw Dick Butkus make was against a bootleg pass, which is the hardest play a middle linebacker has to play against. He was a freshman at the University of Illinois, had not practiced with our team at all. The bootleg pass is designed for the backs to fake one way all together to make it look very much like a run -- to draw the linebacker to play the run. The quarterback then wheels and as he turns and runs the other way, he throws the ball to the crossing end who goes in the area where the linebacker vacated. As I say, Dick never practiced with us, never worked on the play. Dick took two steps to his right, stopped, turned, ran stride for stride with the end crossing and intercepted the pass. It was immediately evident to me that this is a superior football player, but it didn't take a coach to know that he was a superior football player. Anyone who ever saw Dick Butkus play knows he was a superior player immediately.

His tackling was devasting, his instincts were absolutely unbelievable, but the thing that sets him apart from every other athlete I have known is his great, great intensity. Dick played the game like it ought to be played, all out, all the time, every game, every practice. Dick Butkus is a yard stick, a yard stick for linebackers of all type. He is also a yard stick by which any athlete can measure the intensity of his own personal effort to try to reach the goals that Dick has established.

I can't think of anyone that I have ever known that deserves Hall of Fame more than Dick Butkus. Dick you are a new enshrinee.

I would like to send along my regrets that Mr. Halas couldn't make it here today and hope for a speedy recovery, and I understand he is leaving the hospital today and he will be home, and I hope he will be able to watch this.

I sincerely thank you, Pete Elliott, for giving me the honor of being my presenter, and secondly for the instrumental part you played as coach at the University of Illinois. To be truthful, I dreamed of being a great football player as far back as I can remember. I decided to take one step at a time and wouldn't settle for less. I knew God had given me the physical aspects needed, now it was up to me. So, I began to follow my career and my dream first at Chicago Vocational High School, and after meeting and being coached by Mr. Bernie O'Brien, I knew I had met something special. I thank you Bernie O’Brien for your guidance as a coach and most of all your friendship.

Then I went up to the University of Illinois. Was starting to gain confidence in myself as a football player and with many hours of help from coach Bill Taylor and the Hall’s own Pete Elliott, the Illini went on to win the 1964 Rose Bowl. The Rose Bowl, as it turned out, was the only major postseason game I participated in in my whole pro football career. Thank you, Bill Taylor and Pete Elliott, for being an important part of my life.

I felt good. I felt my goal and my dream was in sight when I entered professional football. Finally, after eight years of preparation, my opportunity was before me. Yes, I was secretly afraid I would stumble, and I did many times. There were times I needed more energy and more strength and more vitality to do all that I felt I must do. Anxiety and apprehension would fill my mind. I knew my family, coaches, fans and also first of all, my God, was counting on me. I also felt that there was something so great in me that nothing in this world could deflect me or hold me back if I kept myself humbly in contact with these people. So, I tried to meet each problem intelligently and each difficulty courageously while I played as a Chicago Bear. I was very proud to be a Chicago Bear and I would certainly like to thank Mr. Halas along with Abe Gibron, Don Shrinnick, George Allen, Joe Fortunato, Bill George and many other of their organization who helped and understood me during those nine years.

I am so happy that my beautiful mother is here to be able to share with us this meaning of today. For she and my father, who passed away several years ago, were always beside me. They were always sensitive to my needs as a player and as their youngest son. So, I would like to give a smile and a wave to my mother. My sisters, Alberta and Lenore; my brothers John, Ron, Don and Dave also I felt were my greatest fans. Their love and loyalty to me as a player and a brother will also be appreciated by me.

The biggest thank you comes to my wife, Helen. I have come to realize that during my playing days that her lonesomeness and much of the lonely times meant the same to both of us. She was always there waiting for me with that open love that I really needed. Home with my wife and children, Ricky, Nikki and Matthew, always makes me feel at peace. So, thank you Helen for being my greatest fan and most of all my best friend.

I consider being inducted into the Pro Football Hall of Fame as the top of my dream. For only on the top can I see the whole view. And I can now see what I have done and what I can do from now on. I have a new vision and a new goal now and that is simply to be a better husband and a better father and a better person. Along with the other enshrines I will always try to be a proud representative of this the Pro Football Hall of Fame.