"Who the hell likes to lose? Sure I’m a tough loser. Who isn’t? If you don’t want to win all the time, you’ve got no business holding a job in sports.” 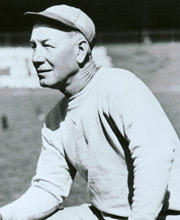 When the Philadelphia Eagles hired Earle “Greasy” Neale as their coach in 1941, the first thing he did was study the coaches’ game film of the Chicago Bears 73-0 title win over the Washington Redskins. After studying the film endlessly, Neale became the first coach to imitate, and some say, improve the Bears’ T-formation.

Although it took Neale awhile to pull together the needed talent to build a winning team, once he had the right ingredients, they stayed among the league’s best for nearly a decade.

In three years Greasy had the Eagles in second place and, three years later, he had them winning their first divisional crown. His offense was led by the passing of quarterback Tommy Thompson, the pass catching of future Hall of Fame end Pete Pihos, and the running of another Hall of Famer, Steve Van Buren.

Defensively, Neale developed the Eagle Defense, which was a mainstay around the league for years to come. The defensive set eventually spawned another National Football League favorite, the 4-3 defense, which is still featured by teams today.

From 1944 through 1949, Neale’s Eagles finished second three times and in first place three times. The Eagles won the NFL Championship in 1948 and again in 1949, and were the only team to win back-to-back titles by shutting out their opponents. They beat the Chicago Cardinals 7-0 and the Los Angeles Rams 14-0.

Long before he became a head coach in the NFL, Neale starred as an end on Jim Thorpe’s pre-World War I Canton Bulldogs. A successful college coach, he also led his Washington and Jefferson College squad to the 1922 Rose Bowl. And football wasn’t the only sport in which he excelled. He was an outfielder who batted .357 for the Cincinnati Reds in the infamous “Black Sox” World Series' of 1919.

Greasy Neale is being honored here this weekend because of his decade long tenure as the successful coach of the Philadelphia Eagles. But his story is actually a maze of sub-careers all worthy of lengthy mention. Briefly, Greasy' s adventures have found him filling such roles as captain and coach of his Parkersburg, West Virginia high school team. A college freshman leading tiny West Virginia Wesleyan to a stunning upset of might West Virginia, and an end playing under an assumed name playing with the old Canton Bulldogs. An outfielder who batter 357 for the Cincinnati Reds, in the infamous Black sox World Series of 1919. A head coach of the undefeated Washington and Jefferson Team that tied, heavily favored California in 1922. A player/coach with the 1930 Ironton Tanks, a team that won four or five games against National Football League foes that year. Then in 1940, Greasy was called out of the college ranks to take over the Philadelphia Eagles, a team that perennially at the bottom of the National Football League. In three years, he had the Eagles in second place, and then three years later had them winning their first divisional crown.

Then in 1948 and 1949 Greasy’s well-balanced and well-trained Eagles scored consecutive shutout victories in the National Football League Championship game, a feat no other team has accomplished. Greasy, of course, was a creative coach, a coach who designed the famous Eagle defense, the five-four defense, now of course you have the standard four-four. He invented many offensive plays, so the word creative certainly stands with this great man. Now in happy retirement in West palm Beach, Florid, Greasy is being called back to Canton this weekend to receive pro football’s highest honor as a great sport, make certain his great contributions will be remember forever, and I may sound redundant but I say this that it certainly took a lot of courage for a man to pick a broken-down college linemen first as his pick in 1949. I am very grateful to a great man, a great coach, my boss, Earle Greasy Neale.

I thank you Chuck. Ladies and gentlemen, as he told you, I was in the World Series in 1919 that's the Black Sox series. Then again two years ago, I was elected to the National Football Hall of Fame at New Brunswick, New Jersey, as a football coach, they only choose one year. And, in January 2, 1922 we took the little W&J team to the Rose Bowl. They made two 1st downs against us. We scored a touchdown, but it was called back. They never had the ball in our territory until they blocked a kick in the fourth period. This was the greatest forward passing team in America that year and they didn't complete a pass. That was January 2, 1922. This is the greatest honor that I've ever received, to be elected to the Pro Football Hall of Fame and I mean it from the bottom of my heart. I have three boys that belong in Canton, or lived in Canton, I had Abe Fisher at West Virginia Wesleyan, and he was my safety man and the left end on offense. In 1916 and 17 that was three years that he played. Then I had two boys from Canton by the name of Clemm Mitchell and Hunk Harmony, God rest his soul, 'cause she died about a year ago from Canton. These three men were all from Canton. A few others are here in my honor, Eke Allen, Joe Bone, Ralph Vince, Lefty Milziner who pitched for me at the University of Virginia, Russ Stine, captain of the W&J football team of 1921, and Farmer Nea who played guard for me and defensive tackle on that famous team that we took to the Rose Bowl.

I played in 1917 with the Canton Bulldogs under the name of Foster. The Detroit paper came out and picked an all-pro team and they picked Greasy Neale at right end. The reason I covered it up with Foster was because, or had the fictitious name Foster was because the Cincinnati ball club didn't allow you to play professional football. Now I'll speak of Jim Thorpe. I saw him in 1919 when I wasn't playing, because I was in a World Series that year although he offered me twice as much money, I was getting in 1917. I saw him punt three times, Jim Thorpe, in 1919. 80 yards, each one traveled over 80 yards. He could run the 100 in the uniform in ten seconds. He weighed 100 pounds, could block, and he played at Akron all by himself. He was the only man in the backfield, he sent Gey to scout Youngstown. We were on our way to Akron and we stopped in Pittsburgh to see the Pitt- W&J game. We got a message there at the Shenley hotel that they were sending a preacher after us in Methodist school and they were going to ask for our resignation if we played at Akron the next day.

We backtracked into West Virginia and of course we didn't play. Well he was so sore the following week that he could not play in the ball game, so he put me at fullback. Now I have played three ball games - I played right end in the first ball game, I played quarterback the second half of the Youngstown game, at Youngstown, and in the third ball game against I mean the 4th ball game (we missed the Akron game). In the fourth ball game against Youngstown, I played fullback and I backed up the line, the first time I had ever been behind the line in my life, we beat them 13-0. Then Lex Thompson decided to buy a ballclub in the National Football League. We finally got the ball club away from Rooney and Bell. They gave us three players of the two teams, all the rest of them retired that they gave us. They gave us Regazzo, Tommy Thompson, because he couldn't run. I made a quarterback out of him and he was really a great quarterback. He is now sick with arthritis out in Calaco Rock, Arkansas. So, we ran the T-formation and how I got the T-formation was because I was playing bridge at the University of Virginia with the boy that was studying law, and he invited me over to a restaurant right off of 8th Ave and 56th St. west 56th St. and he had all the officials with him, of the Fox films. So, I said to him, I said, I don't understand how you get this play, this special play that you show on TV, I mean on your pictures , I said we take the whole ball game, I says you do? I said what would it cost me for a 16mm real of the 73-0 game which the bears had beaten the Redskins down in Washington? Oh, $168.00. I said get them for me, and then I studied them eight hours a day for the next four months and I picked out the best that Halas had.

I was the first man in the National Football League outside of Halas that ever used the T-formation. I couldn't make it go, so I spread it out, put a man in motion, and came back on the end. And Jimmy Castiglia ran, he must have run for 10 touchdowns, over 40 yards, that year. the day they attacked Pearl Harbor, we had them beat 14-7. Bob Suffrage blocked three place kicks after touchdowns, but we still led them 14-13. The people in the stands said we ran the T formation better than the bears did. We won the eastern championship 3 times and we won two national championships, 1948 and 1949, the national championship. I'm glad to be here, I'm tackled to death that I'm not going into the Hall of Fame, the Pro Hall of Fame. I belong to both of them now and if there's a Hall of Fame in heaven and I'm so lucky to go there then I'll die trying. Thank you.