"I don't think anybody knows as much about football as my people. We see more than anyone in the world. A coach or a player may see one game a week, but we see 14 professional games every week. 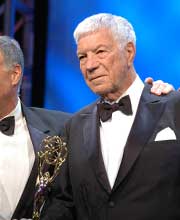 The creation of NFL Films in the early 1960s no doubt played a significant role in the growth in popularity of the National Football League. The man behind the idea of NFL Films was Ed Sabol.

Sabol, an aspiring filmmaker, was selling overcoats for his father-in-law in Philadelphia when at age 45 he hatched the idea of forming Blair Productions, a film company he named after his daughter. In 1962 Sabol contacted National Football League Commissioner Pete Rozelle with an offer to double the $1,500 bid for the rights to film the 1962 NFL Championship Game between the New York Giants and Green Bay Packers. Rozelle accepted and Sabol's film company was off and rolling.

From the very start, Sabol incorporated a unique creative angle inspired by his background in the drama society at Ohio State and a brief stint on Broadway. Rather than use a single camera located high in the stadium that day, Sabol added a sideline camera to catch the intensity of the players. Blair Productions continued to shoot NFL action for the next two years before Sabol convinced NFL Commissioner Pete Rozelle and the 14 team owners that they needed their own motion picture company. With that, NFL Films was born. Sabol served as the President of NFL Films until 1985 when he turned over the role to his son Steve. The senior Sabol continued to serve as the Chairman of NFL Films through his retirement in 1995.

With Ed Sabol's vision, NFL Films has revolutionized the manner in which sports are presented on camera. Many firsts in film were introduced under his leadership ranging from the first use of a microphone on coaches, referees and players; use of a reverse-angle replay; adding popular music to footage; and the ever popular bloopers videos.

NFL Films has continually adapted to new technology while maintaining its dramatic storytelling technique. The company began producing weekly NFL highlight shows in the late 1960s, introduced the first sports home video in 1980, and today remains at the forefront of the film industry. In 2002, the company moved into a 200,000-square-football facility that includes productions studios and massive film library. 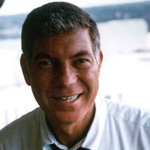 Steve Sabol (Presenter):
Let me tell you about my dad. He was a loving father. He was generous boss. He was a leader. He was a dreamer. But most of all, he was the funniest man I've ever known.

He had a brief career on Broadway. He was with the Ritz Brothers who were sort of the K-Mart version of the Marx Brothers and he loved to perform. My sister and I always used to say that dad was two Stooges short of a good routine. Our family vacations were like Hollywood movies and my dad was always the star.

He was a great athlete. As a high school swimmer, he held the world's record for the 100-meter free style when he was at Blair Academy. You know there are some fathers that become sort of like the second coach and they drive their kids. But my dad always felt that sports should be fun and that's the way he treated my participation.

He served in World War II under General Patton. When he returned, he got a job with my grandfather as an overcoat salesman and he hated it. Thomas Jefferson said "every man's work is always a portrait of himself." Well my mother wanted to have a portrait of my father but dad didn't want to be in a business suit. My dad wanted to be a matador (Steve holds up a painting of Ed in matador dressing).

He was a showman at heart and his hobby was movies. Home movies at the time but you could see that that's what he really wanted to do. I don't remember my father having a head in those days. It was just these arms and this metal camera on top of his shoulders. My first pony ride; my first haircut; my first football game my dad filmed. My grandfather got to the point where he was going to retire. My dad decided, now he wanted to create a business, and what better business did he know than making movies. So he decided to make his hobby his profession.

When we did the '62 Championship Game, we needed a big name to host the show. The biggest name in the NFL was Frank Gifford. But when Frank showed up to the stadium, he didn't have a jacket and it was cold. So dad took his overcoat and gave it to Frank.

He had it all. He did it all, and loved it all. When dad was inducted into the Hall of Fame, he called me and he said, "Send me a producer. I've got one more film left in me."

And so, here it is, the last film directed by Ed Sabol.

Ed Sabol:
George Halas once called NFL Films the "keepers of the flame." Our passion for preserving football history was ignited 50 years ago. It all began with a vision and legendary voice.

Narrator:
(Vince) Lombardi, a certain magic still lingers in the very name. It speaks of duals in the snow and cold November night.

The autumn wind is a raider, pillaging just for fun, he'll knock you round and upside down and laugh when he's conquered and won.

They are the Dallas Cowboys, America's team.

Ed Sabol:
As football became America's game, we looked for new ways to show it. A grown man's love of a little boy's game, that's what inspires those who play football and it inspired us.

Ed Sabol:
In the NFL the torch like a perfect spiral is passed from one generation to the next. It's the same way at NFL Films, we're the "keepers of football's eternal flame." Make sure that the spirit of the game burns bright forever. 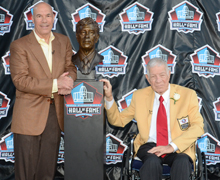 Steve Sabol:
Ladies and gentlemen, I present my dad…Ed Sabol

Ed Sabol:
I dreamed a dream, the impossible dream. I dreamed the impossible dream, and I'm living it right this minute. I said that twice because at my age, you know, your memory starts to go a little bit. In case I forgot it, I would have a backup. Now if you can figure that out, you're pretty smart.

I have been to many of these events in the past, usually shooting a camera and the Enshrinees would usually come up and most of them would say pretty much the same thing. They would congratulate their pro coach, their college coach, their high school coach, their grammar school coach, and even sometimes their 80 pound coach.

But I didn't have the luxury of the advice for all of those wonderful coaches, but I do have some fans. And those fans are all you people sitting out there in those seats.

But of course this honor tonight really goes to NFL Films. I just happen to be accepting all the accolades and all of the other things that go with it. But it has been really exceptional.

I just want to say one thing, I've been very, very happy and very proud to have been your boss for all these years. You're a great bunch of people dedicated and loyal and hardworking, and you're the reason I'm sitting up here.

So as we get to the end of this, I just want to say thank you, which really doesn't mean much when I say thank you. It's not adequate. Al Jolson, who is an old time entertainer way before your time, when he finished his act he used to say, "Folks, you ain't seen nothing yet."

So I'm just going to say, thank you, God bless you, good luck and thank you again.