I remember clearly, on one of the first scrimmage plays, that a rookie halfback was knocked cold trying to bring down Bill Osmanski. That play served as a valuable lesson for me. Whenever I ran with the ball, I had a picture in my mind of that back there on the ground, cold as a stone. I would run as fast as I could if there was any daylight.” 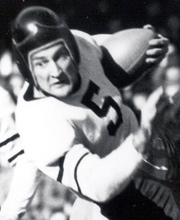 Halfback George McAfee at 6-0 and 178 pounds did not have the physique of the average pro football player, even in the 1940’s when he starred for the Chicago Bears. Even Bears founder and coach George Halas, who signed the the Duke All-America after he was the No.2 overall pick in the 1940 draft, wondered if he had made the right decision.

From the start, however, McAfee established himself as an explosive game breaker, the kind of back that was a threat to go all the way every time he had the ball. In his first exhibition game, George returned a punt 75 yards for a touchdown with just seconds remaining to defeat the Brooklyn Dodgers. In the 1940 regular-season opener, he ran back a kickoff 93 yards and threw a touchdown pass in a 41-10 Bears victory over arch-rival Green Bay.

In the historic 73-0 rout of the Washington Redskins in the 1940 NFL Championship Game, McAfee contributed a 35-yard interception return for a touchdown. Eventually, to be compared to McAfee by Halas was considered the highest compliment.

McAfee's pro career was not particularly long – limited to just eight years before and after World War II service. While his career statistics are not overwhelming, they do show that he did just about everything a player could do with a football. He was a breakaway runner, a dangerous pass receiver, and one of history’s best kick-return specialists as evidenced by his record-breaking 12.78-yard average on 112 punt returns.

George also played defense and recorded 25 interceptions during his career. George, whether running wide or up the middle, either as a pass receiver or a decoy, was known as "One-Play McAfee," and a constant headache to the opposition. McAfee also pioneered the use of low-cut shoes, which he believed improved his speed and elusiveness.

Mr. Chairman, Commissioner Rozelle, and friends of football, it's a real privilege and honor to be able to present George McAfee into the Hall of Fame. He was not only a great football player at Ironton, Ohio where he made the all-state a couple of times, then he attended Duke University where you people remember he was an All American half-back, but actually his development did not occur until he joined the Chicago Bears under a great coach and a fine individual George Halas. The T formation sort of new in those days, and George developed into the most exciting running-back of modern times. He was a fine pass receiver and believe it or not ladies and gentlemen he was probably one of the outstanding defensive backs in pro football. This is only part of George McAfee' s history. He's a fine young man, a great family man, in fact his brothers and sister, his lovely wife, Jean, and his children, they're here today. All I can say is that George McAfee portrays everything that is good about sports and folks it’s a real privilege great pride to present not only an outstanding athlete but an outstanding citizen to you people today in George McAfee.

Thank you, Dick, ladies and gentlemen. It's a real honor for me to be here today and to be inducted into this National Pro Football Hall of Fame and it's a real pleasure also to have Dick Gallagher, my former high school coach down at Ironton, Ohio, here today doing the honors for me. Dick gave me my initial start in football, back in 1933 in Ironton. It was also here that I had my first taste of pro football, watching the Old Ironton Tanks play whom I'm sure many of you people here from Canton well remember. Football has been very good to me and I could not accept this award without saying just a simple thank you to just a few of the people that has helped me so much.

Following Dick Gallagher, of course, he said I went to Duke University where I played under Coach Wallace Wade and then on to the Chicago Bears where I had the good fortune of playing, with Mr. George Halas, Papa Bear himself and there's also another group here that I want to say thank you to, and I really mean it when I say it is that wonderful family sitting out here. They gave me a lot of encouragement and help along the way and there was a few of them who made a few lasting impressions on me and if you don't believe it, I've got a scar here and a few back here, but if brother Jack and John are out there, I left a few on them too. It's a real pleasure to be here and I want to thank everybody for being so wonderful to me and my family and I'll cherish this honor as long as I live. Thank you.