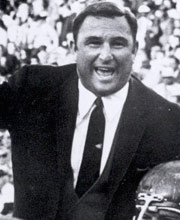 Hank Stram was an assistant coach at the University of Miami in 1959 when Lamar Hunt hired him as the first head coach of the Dallas Texans (the Texans moved to Kansas City in 1963 and were renamed the Chiefs) of the new American Football League.

The young coach was an immediate winner in Dallas and won the 1962 AFL championship. He went on to become the only coach in AFL history to take his team to two Super Bowls, losing to the Green Bay Packers in Super Bowl I and defeating the Minnesota Vikings in Super Bowl IV. His 23-7 Super Bowl IV victory over the Vikings not only spotlighted his powerful team, it gave credibility to the entire AFL.

An innovative coach, Stram developed or utilized such things as the “moving pocket,” which used the talents of his quarterback Len Dawson. He devised a two-tight end offense – it provided an extra blocker and slowed down the pass rush. On defense, he made famous his “stack defense,” with linebackers stacked behind down linemen. Whether he used a 3-4 defensive alignment or a 4-3, Stram differed from other coaches of that day by always having a man head-up on the center.

An excellent evaluator and developer of talent, five players from the Stram-coached Chiefs are members of the Hall of Fame, including Bobby Bell, Buck Buchanan, Dawson, Willie Lanier, and Jan Stenerud. Lanier, Bell and teammate Jim Lynch were considered by many to be the best linebacker trio of that era.

Len Dawson (presenter):
Chris (Berman) thank you very much. First of all, I would like to congratulate Marcus, Joe, Elvin, James for being selected a great class. You talk about class – not only great football players but they're also people with class. So, congratulations.

But, I'm here to talk about a mentor. Yes, Henry, we'll mention "65 toss power trap" somewhere along the line here. You know, Hank and I go back a long way. Fifty years ago – five, oh – fifty years ago as a senior at Alliance High School which is Route 62 around here, it's about 18-20 miles east. Hank was an assistant coach at Purdue University, came to help recruit me to that school. And, while at Purdue, he coached me for three years. Later on professionally, he coached me for 13 years. So, I think I'm qualified to know something about the makeup of this man and why he has been so successful.

And, I will start with the first word, "passion." Tremendous passion for the game of football. He has the same passion today as he had fifty years ago. And, he loved to coach. It's all he's ever done really besides broadcasting. The thing is he has paid his dues as a coach. He spent 12 years as a collegiate assistant football coach and then Lamar Hunt wisely selected him as head coach of the Dallas Texans of the American Football League. And, what a choice that was. You've heard some of the things that he was able to accomplish – most victories in the 10-year history of the AFL, Coach of the Year, played in two of the first four Super Bowls between the AFL and the NFL, won the last game played between the AFL and the NFL.

And, speaking of the AFL, those of us who were a part of it are quite proud of the fact that it was successful because so many people thought that it would fail. One of the big reasons why it was successful – the mentor Hank Stram. And, I'll tell you why he was successful. First of all, we mentioned that he was a great innovator, he was. Henry was not afraid to try something that was different but let me assure you there was always a good reason why he was going to make that decision to do it.

Also talking about the "Tight-I" formation where we would create formations. That would keep the defense on the defensive. Defensively, that "triple stack" against Minnesota was a gem because it completely shut down he Vikings' offense.

Hank was a tremendous teacher. Now, he wasn't one of these coaches who would give a little spiel before practice then go out, stand around, fold his arms and twiddle his thumbs. Oh no, no. Henry was not that way. He was involved in every phase of the game because he knew the fundamentals and techniques of every position. And, I know this for sure, that guy was the best quarterback coach I have ever seen. He knew the basic fundamentals of the quarterbacking position – ball handling, footwork, timing, passing; and he made sure that we worked on those things every day in practice to try to improve and get better.

Well, he knows something about people. Hank has always said that you win with people. He has this unique ability, with all the different personalities and egos on a football team, to make each and every one of us feel like we were something very special.

And, I'm going to tell you how good I think he is. I wear a Super Bowl ring on this hand, Hall of Fame ring on this one. I know I wouldn't have either one if it hadn't been for this guy – Hank Stram.

This is tougher than when I was up here before. I'm a lucky son of a gun because here I am getting the opportunity to introduce the man who's responsible for me getting into the Hall of Fame. 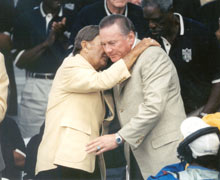 Hank Stram:
Thank you Lenny for your kind words, for your friendship, for your talent, and for your leadership. You are the greatest.

And Lamar Hunt, what a great owner, what a dear friend. I'm here today because you, Lamar, provided me with the opportunity to be your head coach for 14½ years. Throughout my coaching career, I have been so fortunate to be surrounded by so many great players and coaches from Purdue University, to SMU, to Notre Dame, the University of Miami, the Dallas Texans, the Kansas City Chiefs, and New Orleans Saints. No coach could have asked for a more dedicated, loyal, and talented group of people and if there were time, I'd single out each one of you. Someone said that friends are angels in disguise. If this is true, I have been surrounded by angels for most of my life. Many of you angels are here today. I thank you for the attendance, for your support, and the warm friendship you have provided over the years.

My induction today is shared by many, who are seated in this stadium. It is also shared by many who have even better seats, in heaven. My parents and deceased family, friends, team members, and Jack Buck - my radio and TV partner.

Today, I am joined by my number one team, and by far my strength throughout the years, my family. My sister Dolly, my Aunt Mary, my son Henry. My son Dale and his wife Janet. My son Stu and his wife Dana. My daughter Julia, my son Gary, my daughter Mary Nell and her husband Patrick. And last, without any question, my number one teammate in life, and the only girl I ever loved, my Phyllis. I love all of you and I have never underestimated the strength you have provided.

As I matriculate my way down the field of life, I will never forget this moment and you wonderful people who helped make this day possible. The "good book" says all good and perfect gifts come from above, and this is truly a perfect gift. I thank God and I ask His blessings on each of you and on our America.

Len Dawson: My privilege to introduce him into the Hall of Fame – my mentor, friend – Hank Stram!