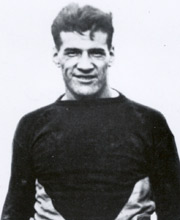 Joe Guyon, an American Indian from the Chippewa Tribe, was born O-Gee-Chidah on the White Earth Indian Reservation in Minnesota. He received only a sixth-grade education from the American government. "It was hard trying to make something of yourself," Guyon once said. "Sports were one of the few ways a youngster could pull himself up."

So Guyon did the only thing he could do. He used his athletic skills to gain a college education and a satisfying professional career. After playing on Georgia Tech’s national championship team in 1917, Joe signed to play pro football with the Canton Bulldogs in 1919.

After the NFL was organized in 1920, Guyon played seven more seasons with six different teams. From 1919 to 1924, Joe teamed with another outstanding Indian halfback, the fabled Jim Thorpe. Both were talented players but the better-known Thorpe grabbed most of the headlines.

The paths of the talented Indian pair parted late in the 1924 season when Guyon left the Rock Island Independents to go to the Kansas City Cowboys. Guyon stayed with the Cowboys in 1925 while Thorpe, then 37, moved on to the New York Giants.

Two years later in 1927, Guyon became a Giant and he played a major role in leading the New Yorkers to the 1927 NFL championship. Guyon, away from the shadow of Thorpe, enjoyed one of his finest seasons and gained the first significant publicity he had enjoyed since his college days. The 1927 Giants compiled an 11-1-1 record largely on the strength of a superior defensive that allowed only 20 points all season. But Guyon, flashing all of his many abilities – passing, running, punting, tackling and blocking – played a leading role in scoring the necessary points for his team that also finished second in scoring that season.

Thank you, Mr. Chairman, ladies and gentlemen. I think it's about time that we honor an Indian instead of shooting them. Joe Guyon you might say won back the East for the Indians. He was at Carlisle with Jim Thorpe when the Indians won the Eastern Championship and he was at Georgia Tech when the rambling Rex eliminated and demolished Pennsylvania 41 to nothing for another Eastern Title. Guyon must have been Thorpe's favorite running mate. Jim brought him into Pro Football in Canton in 1919 and the year before the National Football League started and the Bulldogs won the unofficial World's Championship. They played together in Cleveland, in Marion, and Rock Island. As was the case in those days of the folding franchises, Guyon plied his football trade in many communities, he was also at Kansas City and New York and it was there with the Giants in 1927 that he ended his career by-helping Tim Mara's club to win 11 of the 12 games and seize the National Football League Championship. Thus, Joe Guyon ended as he began - a champion.

Ladies and gentlemen, I'm gonna greet you like Christopher Columbus was greeted when he landed at Plymouth Rock, - How (a few lines of Indian dialogue) and interpreted, greetings immigrants and friends. I am really happy to be here especially here at Canton where they do things up great and I'm very appreciative to receive this honor and I'll always remember you. Thank you so much.