"You can talk about the talent this team has all you want but I think it's the mental toughness and the work ethic that sets us apart." 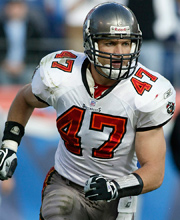 The Tampa Bay Buccaneers selected John Lynch out of Stanford in the third round, 82nd choice overall, of the 1993 NFL Draft. A hard-hitting and smart playmaking safety, Lynch was a vital addition to the Buccaneers defense that soon dominated the NFL.

He worked hard to earn a permanent starting role in 1996, his fourth pro season. Lynch made the most of his opportunity as he racked up more than 100 tackles and tied his career-high with three interceptions. From that point forward, he was the anchor of Tampa Bay’s secondary on a defense that perennially ranked among the NFL’s best.

Lynch was voted to the Pro Bowl for the first time following the 1997 season. It was the first of nine Pro Bowls to which he was elected. He earned first-team All-Pro recognition three straight years from 1999 to 2001.

In 2002, he was an integral part of the Buccaneers’ championship season that was capped with the franchise’s first Super Bowl title. Lynch contributed 96 tackles (50 solo), three interceptions, and 12 passes defensed as Tampa Bay finished 12-4. His strong play continued through the postseason when he added five tackles in the divisional playoff, six more tackles in the championship game and registered one tackle and pass defensed in the Buccaneers’ Super Bowl XXXVII victory.

Lynch signed as a free agent with the Denver Broncos in 2004 where he played the final four seasons of his 15-year career.  He helped lead the Broncos to a conference championship game appearance in his second season in Denver. That year he recorded a career-high four sacks, intercepted two passes, forced four fumbles, and racked up 69 tackles. He added three solo tackles, one assist and one pass defensed in the 1995 AFC Championship Game against the Pittsburgh Steelers.

In all, Lynch played in 224 regular season games, recorded 26 interceptions returned for 204 yards, added 13 sacks, and registered more than 1,000 tackles. He was credited with 90 or more tackles in a season nine times during his career.

(Records through the 2003 season, Lynch’s final season with Tampa Bay)

Qualified for Postseason in Bold

JOHN LYNCH: Thank you, Jake. Such an honor to have you as my presenter. Thank you, Herm.

What a humbling honor. First, let me say nothing about my Hall of Fame journey has been easy. I waited eight years as a finalist, and then David Baker tells me I'm following Peyton Manning. Thanks a lot, David.

Peyton and the rest of our 2021 class: Congratulations. What a privilege to be inducted into this brotherhood, the Pro Football Hall of Fame, with all of you.

As everyone up here will attest, it takes a lot of belief to get to this stage. However, belief is not something that simply happens. It has to be nurtured a million times over. A note. A pat on the back. A piece of advice. Coaching. These are the things that foster belief in ourselves.

Today, I will recognize those who have done this for me. I would not be here today if not for one person: my wife and my best friend, Linda Lynch.

I met Linda in seventh grade in our hometown of San Diego. Linda, you have inspired me as a man, a father, a husband and a leader. For 15 years as an NFL player and nine years with the NFL on FOX, Linda wrote a note to me that I read before every single game. She didn't ever miss one. Her notes always calmed me, focused me and drove me to be my best self.

Babe, I love you more than you will ever know, and I'm so thankful and grateful to share this life‑changing moment with you.

Our four amazing children – Jake, Lindsay, Lilli and Leah – each one of you, in your own special way, has provided me inspiration that cannot be described, even with the full definition of love. My pride in each of you is endless. I hope that I have helped you grow your belief in yourself the way you have for me.

My sister and brother, Kara and Ryan: You have always supported me. Please know where you live in my heart.

I went to Stanford University as a quarterback and a baseball player. After two years as a No. 2 quarterback, I was tired of that. I decided the best way for me to get on the football field was to convert to safety. I want to thank the late, great Denny Green for guiding me through this life‑altering decision.

Later that year, I was drafted in the second round of the Major League Baseball Draft by the Florida Marlins and believed that baseball was going to be my future. Enter the late, great Bill Walsh.

Coach Walsh had returned to Stanford as our head coach in 1992, when Coach Green accepted the head job for the Minnesota Vikings. One day I received a call from Bill: “Hey, John, this is Bill Walsh. I've been studying our defense last year, and John, you were our best defensive player.”

Shocked, I said to him. “Coach, with all due respect, I played safety for one year, and I played half the snaps. How can you possibly arrive at that opinion?”

He said, simply, “The film. I watched it, and you can be a Pro Bowl safety in the NFL.”

Well, when I returned to school, in true Bill Walsh fashion, he not only told me, he showed me. He showed me a tape of me making a play, then perhaps a play of perhaps the greatest safety of all time, Ronnie Lott, making a similar play. There were only five plays on that tape, but after watching it, I was all in.

Coach Walsh: You gave me the confidence to follow my heart to an NFL career. Without you, I'm not standing on this stage today.

Pete Egoscue, you were more than just someone who trained me. You taught me how to outwork my competition. That gave me the mental and physical edge.

There were so many other coaches who were indispensable to my success: Monte Kiffin, Jon Gruden, Rod Marinelli and Mike Tomlin among them.

One special human being who saw something in me before I saw it in myself is my co‑presenter Herm Edwards. Herm had a vision for the way I should play the safety position. He encouraged me to play with the passion, the joy, physicality and instincts that defined my game.

Herm, you were also the first to tell me that I could have a bust someday in Canton, but only if I believed it. We're here, Herm.

Hall of Fame coach Tony Dungy had such a profound impact on me, on and off the field. This is a true story. In his first meeting as a head coach of the Buccaneers, he said to us, “Our job is to win championships here in Tampa. But if that's all we do, we will not have done enough.” He went on to talk about the responsibility we had to give back to our community. Tony, I thank you for being the man that you are.

A sincere thank you to the Glazer family and everyone at the Buccaneers for making my first 11 years in the NFL so meaningful and helping us to bring a world championship to Tampa with Super Bowl XXXVII.

To the late, great owner Pat Bowlen – a true Hall of Famer – to the Bowlen family, Mike Shanahan and everybody at the Denver Broncos: Thanks for giving me such a great landing spot to play the final four years of my career.

Over the last four seasons, I've had the honor to serve as the general manager of the San Francisco 49ers. Thank you to Kyle Shanahan, to Jed York and the entire York family for having the faith in me that you do.

Ronde Barber, your time's coming, man. You're going to be here. Mike Alstott, Champ Bailey, Rod Smith -- these are just a few of the great players that I was blessed to call teammates. There are so many to acknowledge.

But two guys back here had my back from Day 1. Together, we forged an unbreakable bond, and I'm overjoyed to join you two in Canton.

Before concluding, I want to state the National Football League is the greatest metaphor for life that I've ever known. It challenges each and every one of us who plays this great game in every way possible. Everything about the game is hard and tests your will. It compels every man who puts on a uniform to not only do their best but to be their best.

In football, we quickly discover that we're only as strong as our weakest link, and if we're to achieve the goals that we set for ourselves, we must all learn to play together and pull together.

Each of us comes from a different walk of life, but when we huddle up, we huddle up as a team. It doesn't matter where we come from or your background. All that matters is the fulfillment of one goal: Victory.

Tonight, I advocate that we take the lead of football and huddle up as a people, as a great nation. Let's find the common ground through our shared values. Let's celebrate and learn from our differences. Derrick Brooks from Pensacola, Florida; Warren Sapp from Apopka, Florida; and John Lynch from Solana Beach, California, have. So, too, can all of you.

Thank you to David Baker, to Ira Kaufman and to the Pro Football Hall of Fame Selection Committee. My beautiful family, dear friends, coaches, teammates and all of the fans, I love you.

As my journey illustrates, one person can make a difference. I encourage each and every one of you to be that person who provides someone else with the belief that they too can be great. May God bless you all. Thank you.