"I’m not much for X’s and O’s. All that stuff really can’t prepare you for a defense. You have to adjust to what they do from play to play. That’s why I like to carry the ball a lot. It lets me get a feel for what the defense is doing.” 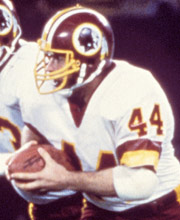 Running back John Riggins played 175 games in 14 seasons with the New York Jets and Washington Redskins. A Big Eight rushing champion who broke Gale Sayers’ rushing record at the University of Kansas, Riggins was the first pick of the New York Jets and the sixth player selected in the 1971 NFL Draft.

The 6-2, 230-pound Riggins was not a spectacular running back but he was a classic workhorse ball carrier who specialized in the tough yardage in the big games. He carried 2,916 times for 11,352 yards and 104 touchdowns during his career. He also caught 250 passes for 2,090 yards and 12 touchdowns. His 13,435 combined net yards are among the best ever, as is his 116 touchdowns by rushing and receiving.

Riggins played in the 1982 and 1983 NFC championship games and Super Bowls XVII and XVIII and made the most of his comparatively few postseason appearances. He was the Most Valuable Player in Super Bowl XVII with a then-record 38 carries for 166 yards. He capped off his big day with a 43-yard touchdown run that clinched Washington's 27-17 victory over Miami.

Riggins rushed over 1,000 yards five times in his career and over 100 yards in 35 games, including a then-record six in post-season. He rushed 251 times for 996 yards and 12 touchdowns in nine post-season contests. Riggins followed his Super Bowl XVII success with a sensational season in 1983 when he rushed for a career-high 1,347 yards and a then-record 24 touchdowns. Following that season he was named All-Pro for the first time in his illustrious career.