"My objective is to make the other guy quit. You can tell when it’s starting to happen because he stops rushing as hard and when you run-block he doesn’t resist as much…I like when they have to keep rotating three or four people into the game to try to find someone to get the job done.” 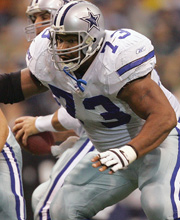 Larry Allen began his college football career at Butte Junior College in Oroville, Calif. before transferring to Sonoma State, a Division II school near San Francisco. He quickly developed a reputation as a dominant lineman and his stock rose among NFL scouts. The Dallas Cowboys used their second round pick, 46th player overall, in 1994 on Allen. He proved his worth by providing versatility for the Cowboys as he played every position on the offensive line but center during his 12 seasons in Dallas before playing two final years with the San Francisco 49ers (2006-07).

At 6’3”, 325 pounds, Allen possessed great athleticism to complement his size and incredible strength. He started 10 games in his rookie season and split time between guard and tackle.  In his second season, he was placed in the right guard spot and helped pave the way for Emmitt Smith who set a Cowboys single-season record with 1,773 yards rushing as Dallas finished fifth in total offense. Allen’s contribution was recognized as he was named All-Pro for the first of seven consecutive seasons and named to the Pro Bowl for the first of 11 times in his career.

Allen continued to shift between guard and tackle and continued to earn All-Pro honors and Pro Bowl nods as a guard. He finished the 1997 campaign and played all of 1998 as the Cowboys left tackle. His job of protecting Hall of Fame quarterback Troy Aikman’s blindside earned Allen All-Pro recognition and a Pro Bowl nod as a tackle in ‘98.

T Earned honor as tackle All other honors earned as guard 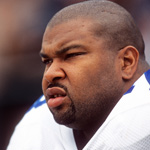 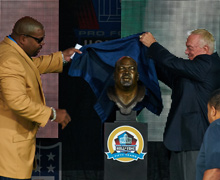 Well, first, I'd like to thank Jerry Jones for that amazing introduction.  He's been like a father figure to me, and whenever I needed his help, he was there to help.  I'd also like to thank his beautiful wife, Gene Jones, his children, Charlotte, Jerry Jr., and Steven, and the rest of his family. I'd also like to thank Marilyn Love and Rich Dalrymple.  Of course I want to thank my heart and soul, my wife, Janelle.  On our first date, she cooked for me.  She cooked me two chickens, french fries and baked me a cake and gave me a 40 ounce.  I knew then, that was my wife right there (laughing).  She has blessed me with three beautiful children, Jayla Lee Allen, she's a talented actress and a writer.  She helped me write this speech.  I remember when she was a little girl, I would have a bad game.  She was sensitive, and she'd come up to me and say, “Daddy, what's wrong?”  She was about four-years old.  She would bring me cookies, cakes and just try to cheer me up.  She'll be going to Pepperdine University this year I'm so proud of my little mama, and I hope she'll turn into    I know she's going to be an amazing woman.

My youngest, Loriana Allen, she's a basketball player.  She's kind of like LeBron James.  She's pretty good.  She's the funniest person I know.  She makes me laugh all the time.

To my son, Larry Allen III.  He's a 6'4", 290 pound offensive lineman that plays at De La Salle High School, the No. 1 team in California.  He's the smartest person I know, and I'm proud of you, Son.  Very polite, but once he gets on that field, he's a beast, just like his daddy.

I also want to thank my mother, Vera Allen, she can't be here tonight.  She passed away.  I know she's looking down on me smiling.  I was a young boy, and my little brother got into a fight and I went to protect him.  Growing up in Compton, California, it's rough out there.  I was protecting my little brother with the guy who was a little older than me.  He ended up stabbing me.  Three months later my mother said, I'm not raising any punks, so she made me fight this guy.  She said you will fight him until you win.  First day I lost.  Second day I lost.  The third day I finally won.  That was one of the most valuable lessons I learned in my life, never to back down from anybody.

I carried that lesson through my whole career.  I just knew I had to win every play, and that's the reason why I'm here today.

I'd also like to thank my father.  On the other end, he taught me to never get mad, but to get even, to control my temper.  I also used that in the game of football.  I knew if I lost a play, I had 45 seconds to get even.  I'd like to say thank you to my brother, Von, happy birthday, little brother.  After every game I knew when I checked my phone I would receive a text from him telling me how good I did, and I want to say thank you.

Another lady who made a huge impact on my life was my grandmother, Berkeley Dotson.  She was a hard working woman.  She owned three successful restaurants in Los Angeles.  She spoiled me to death and gave me whatever I wanted, but she taught me you have to work for what you've gotten.  When I was 14, she sat me down and said, Larry, you need to find out what you're good at and go do it.  I think I did that, Granny (laughing).

About two months later, it was my first year of football.  I was a junior at Centennial High School in Compton, California.  My senior year I moved to Napa Valley, and went to Vintage High School.  I made a good friend there, his name is Steve Hagland; he's like my brother.  He said, come on, come live with us.  And his family they treated me like I was one of their own.  I'd like to thank them.  The next year I went to Butte Junior College, Chico, California.  A big party school, I had a lot of fun up there.  It was great.

The next year I attended Sonoma State University.  When Frank called me, I didn't have the grades to transfer up from JC, he said I can get you into school, and the rest is history.  He got me into school and turned out great for me.

I was fortunate enough to be drafted by the Dallas Cowboys.  I remember getting a call from Jerry saying, Son, would you like to be a Cowboy?  I said, yes, sir. Ran out of my apartment and jumped into the swimming pool with all my clothes on.

When I got to Dallas, they had just won two Super Bowls.  They had the best player at every position.  I was a rookie.  I didn't start.  It was the first time in my life I didn't start.  So what I did was learn.  I learned from a lot of great players like Erik Williams, Derek Kennard, Mark Stepnoski, Nate Newton, Ray Donaldson, and the great Mark Tuinei, who I know is looking down here today.

All these great linemen took me under their wing and they helped me.  I'd like to say thank you to all of them.

Now to the Cowboy Hall of Famers I played with. Troy Aikman, you showed me how to come to work every day and be a professional, and I thank you.  Michael Irvin, nobody practiced harder than Michael Irvin.  Deion Sanders, who showed me it was all right to be the best (laughing). Emmitt Smith, the all-time leading rusher, I thank you.  You've been a great friend to me.

Growing up in L.A., the Rams were the team I watched.  My favorite childhood player was Jackie Slater.  Mr. Slater, could you please stand up?  I want to say thank you.  I really appreciate everything you did for me.  To Hudson Hauck, my offensive line coach at Dallas.  I love him and I want to thank him for spending all that extra time helping me become a Hall of Fame player.

I'm the fourth Hall of Famer Hudson Houck coached.  I don't know how you nominate somebody, but I think he would be a great addition.  Other coaches that helped me throughout my career, Ernie Zampese, Norv Turner, Chan Gailey, George Edwards, and Joe Avezzano, I know he's looking down on us also.

I'd also like to thank Joe Horrigan, and the Hall of Fame staff for making this and helping us plan this weekend.  At dinner, he brought up a story about a game I had against the great Reggie White.  I have never been dominated like that before in my life.  So I got in that weight room and became the strongest man in the NFL.  I did it naturally (laughing).  All right.  What's funny is once I benched 700 pounds, they tested me twice a week for the rest of my career (laughing).

My goal was simple, to earn a seven word letter called respect.  The respect of my teammates, opponents, and the NFL.  Today, my mission is complete.  I also played hard, whistle to whistle, to make my opponents submit.  And today, I'm submitting to you.  I just can't wait to see my buddies.

Finally, I just want to say thank you to the Hall of Fame, the Hall of Fame voters, and the city of Canton for letting me be a part of this outstanding fraternity of men.  I've been blessed to play the game I love.  And remember this, it has never been about me, Larry Allen, but the many, many people that helped me out.

As you know, I'm nervous, so if I forgot anybody, I'm sorry, thank you, and God bless.