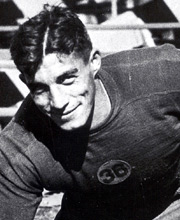 For 11 years, Mike Michalske was pro football's premier guard; a position many insist was the toughest job of all in the 1920s and 1930s. A guard in those days was expected to block the biggest opposing linemen head-on.

He also had to pull from the line and lead interference for the ball carrier. When the other team had the ball, the guard was the key man in stopping the enemy running attack. But he also had to be capable of storming into the backfield to disrupt a passing play.

Michalske was particularly adept at going after the passer. He also championed the idea of using former fullbacks at guard because they were fast and explosive. He sold the idea to Green Bay Packers coach Curly Lambeau and thus it was no accident that many fine Green Bay guards had cut their football teeth as fullbacks.

Christened August at birth, Michalske became known as "Iron Mike” because, while he played 60 minutes every game, he simply never was injured. "I just didn't get hurt," he explained. "The players used to say I must have been getting paid by the minute."

In high school and at Penn State, where he was an All-America pick in 1925, he played fullback, guard, end, and tackle. “Iron Mike” first turned pro with the new American Football League in 1926 but that league folded after one year.

Thank you, Mr. Coleman. Honored guests, ladies and gentlemen. It is my significant pleasure to introduce my, friend and your Hall of Famer, Mike Michalske. Mike is a native-born Ohioan from Cleveland. Mike didn’t play football in high school because he was too small, established quite a reputation for himself at Penn State University, later played with the New York Yanks, joined the Green Bay Packers in 1927, and proceeded in being an all-pro, all-star guard for six of the next ten years and in that time was known as Mr. Guard of the Century in football. I'd like to say a word, I didn’t know Mike until after his playing days, but he showed me then that he had all the agility, the quickness, the speed, the will to win, and he must have been a great blocker because he executed them all on me in the handball court.

I’d like to speak a word of Mike as a coach. He coached in many different places, but I would just like to speak of this one facet. Mike had the unusual ability of being able to get on intimate rapport with the young men that he worked with. He was able to get under their skin and crawl around. He left his imprint and influence on the character of many young men in this country. As a man Mike held friendship as a supreme virtue. This was sacred with him, and if you were lucky enough to be in that inner circle, he was genuine, sincere, loyal, and would give hardily from within himself. There is an expression in the Old West, in the Old Pioneer West, that is grammatically poor, but its context is beautiful. That being, "He is a man to ride the river with.” This means that if you stepped in a sink hole of quicksand in fording a stream, he was the kind of a partner that would come back to get you. Ladies and gentlemen, it is my distinct pleasure to present to you, an extraordinary coach, a great player, ''A man to ride the river with”, from the Green Bay Packers, August M. "Mike'' Michalske.

Ladies and gentlemen, honored guests, you can see I brought my speaker with me, and I don't have to do much talking. But at this moment I would like to say, with pride and humility, this is the greatest moment of my athletic career. It certainly is a pleasure to be here, to be one of the chosen few to be so honored. As Link Lyman said, I wish there could be two or three hundred more, and maybe there will be. It’s such a thing, such a big thing, that I never will get over it. I thank you.