I’m plain and simple the safety man, the guy who has to stop the play when the others don’t, and that’s the way I like it.” 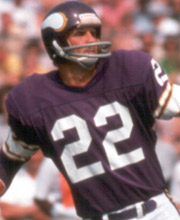 Paul Krause, a 6-3, 200-pound free safety from the University of Iowa, became the leading pass intercepter of all time with 81 steals during a 16-season career with the Washington Redskins and Minnesota Vikings from 1964 to 1979.

A two-way star at Iowa, he was the second-round draft pick of the Redskins in 1964. Although he intercepted 28 passes in his first four seasons, he was traded to the Minnesota Vikings for linebacker Marlin McKeever and a seventh-round draft choice in 1968.  He went on to excel with the Vikings for 12 more seasons before retiring after the 1979 campaign.

Krause had the kind of blue-ribbon rookie season in 1964 that few ever achieve. He led the NFL in interceptions with 12 and was named to the All-NFL first team. He was named to his first of eight Pro Bowls and was second only to teammate running back Charley Taylor for NFL Rookie of the Year acclaim. In his second Pro Bowl following the 1965 season, he intercepted two passes. Named All-NFL four different times, Krause was also selected All-Eastern Conference twice and All-NFC five times.

During his landmark rookie season, Krause intercepted passes in seven consecutive games, and he came near to matching that mark in 1968, when he had steals in six consecutive games. It took a three-interception season in his final 1979 campaign to surpass Emlen Tunnell, who had 79 steals, for the all-time record. The durable Krause missed only two games with injuries in 16 seasons. Uniform Number: #26 with Redskins; #22 with Vikings

Transactions: Traded by Washington to Minnesota for linebacker Marlin McKeever and a 7th round draft choice, July 4, 1968.

Thank you, Jim. You know, Tommy, Tommy McDonald was truly a great football player, a great professional football player and a Hall of Famer. But as a former coach, I can see why he was with five different teams.

I’m extremely honored to be the presenter of Paul Krause for his enshrinement into the Pro Football Hall of Fame. I first met Paul in 1960, when I recruited him to play football for the University of Iowa. Paul was an outstanding high school athlete, receiving all-state honors in football, basketball, baseball and track. During the recruitment of Paul, I was very, very fortunate, and I met his wonderful parents: Ora, his mother, and Olin, his father, who are here with us today. At Iowa, Paul’s success continued as a wide receiver and as a defensive safety. And in baseball, in baseball as a hard-hitting, professionally rated center fielder. Many of his Iowa teammates and many of his Iowa friends are also here with us today.

When you reflect back on the Bud Grant Viking teams of the 1970s and their great success, you think of the “Purple People Eaters” and the great defensive line – the great defensive line of Jim Marshall, Carl Eller, Gary Larsen and the Hall of Famer right behind us, Alan Page (Page was sitting with returning Hall of Famers to the side of the stage). Backing them up, backing them up was a solid linebacking corps and a ball-hawking defense, defensive secondary led by Paul Krause. To quote Bud Grant, "Paul personified the term free safety. For 12 years, he was, in a sense, free to play down and distance, the tendencies, quarterbacks’ eyes, double key receivers, play a hunch, use his intelligence and great athletic ability to be one of the greatest free safeties that have ever played in the National Football League."

Paul Krause’s record of 81 interceptions is a record that has stood 18 years, 18 years, and likely will stand forever. (Applause)

Three years ago, three years ago, Paul’s lovely wife Pam was seriously injured in an automobile accident. Thank goodness she’s here with us today along with their three children and their families. In the aftermath, in the aftermath of this tragedy, along with the support of his teammates, especially the families, Gene Washington, Bill Brown, Dave Osborn, Mick Tingelhoff, Wally Hilgenberg and many others, Paul has been the most dedicated, supportive, positive husband and father I have ever known. Some fans, some fans recognizing Paul Krause’s brilliant career as a free safety are apt to say, "He was really just a center fielder.'' So was Willie Mays.

Thank you, again, thank you again for allowing me the honor to present Paul Krause for his enshrinement into the Hall of Fame. Congratulations, Paul.

Thank you, Jerry. You wrote it just like I told you to. But you haven’t thanked me for being on that Iowa football team that lost so many games that got you out of college coaching, into the world championship Green Bay Packers and then the Minnesota Vikings. So, myself with the other Iowa football players that are here, we accept your condolences and whatever.

I’m not Tommy McDonald, believe me. I couldn’t get close to that, even when I was playing. And don’t think I wanted to.

First of all, I would like thank God for giving me the ability to become an athlete. Without his grace, none of this would be possible. Also thankful for Christian parents who raised me to respect others and be 1998 Pro Football Hall of Fame Enshrinement August 1, 1998 6 reverent of God. My mother and father, Olin and Ora Krause, stand. (Applause) My brothers, Ron and Ken; sisters, Darlene and Jane. Where are you? Stand, please.

Most of all, I’m thankful for my immediate family. My wife, Pam; daughters, Z and Amanda; and son, Blair. Their grandson. . .my grandson, Henry, I’m getting all mixed up here. Will they stand along with my mother-in-law, Connie Henry. (Applause) We’ve been through some bad times lately, but we’ve always stuck together as a family and we’ve loved one another.

I grew up in Flint, Mich. I attended Bendle High School, small school back there with about 300 kids. I would like to thank my coaches, Vern Alword, Mr. Rushin, Mr. Brunett for always being there to open up the doors, for the facilities that we go out and practice. And I would like to thank my high school friends and teammates because while I was playing in college and pro ball, I knew that I was playing for them because they didn’t have that opportunity.

Went to University of Iowa, Jerry Burns was our coach. Had a great year, or four great years there. It was a cultural shock going from Flint, Mich., to the small town of Iowa City. I can remember people used to drive up into town, into town, and leave their cars running and run into the store and I used to always tell them, "Boy, if you did that in Flint, Mich., your car would be there about 10 seconds."

Baseball was a major part of my life there. Football was a major part. I even tried to play basketball and run track, but I almost flunked out of college, so I thought I better only play baseball and football. It turned out that being injured in football, I couldn’t continue my baseball career and just happened to flow into football. Was drafted No. 2 by the Washington Redskins along with Charley Taylor, who was No. 1. At that time, I played a little bit of defense. Lucky enough to be the first rookie to ever make All-Pro and led the team, or the league, in interceptions. My third year there, Otto Graham was coach. He traded me. I couldn’t believe it, Otto. But I was traded to the Minnesota Vikings and everything worked out fantastic. (Applause)

It was an honor for me to play with those great Vikings teams – the “Purple People Eaters.” We were a true example of how teamwork could win championships. And we loved each other. We played with each other on the football field and we became the closest of friends, then and even today, now. Because through all these bad times, they were there when I needed them.

I would be remiss if I didn’t mention my wife’s accident. This is going to be very difficult for me, but I’ll try. My wife of 35 years was injured 2½ years ago, in a coma for 5½ months. The doctors told us she wouldn’t live. The doctor told me, "If you believe in God, start praying." I never believed that she would die, and I’m glad she’s here today. (Applause)

Being a finalist for the last few years – two years ago, I was a finalist for the Hall of Fame. And at that time, that wasn’t the most important thing in my life. This past year, Pam made the statement that this was going to be my year because God wanted her to be present. (Applause) Sure enough, Pam, it happened just the way you said it. And all I can say is never give up your dreams and never give up your faith in God because he’s always there. Thank you very much. (Applause)