"I’m not the biggest guy or the strongest guy either. I have to make up for lack of size with aggressiveness. I’ve always learned that the best way to play the game is to hit your opponent a little harder than he hits you. It’s self-preservation.” 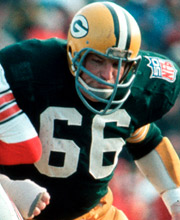 Ray Nitschke, according to Hall of Fame quarterback and teammate Bart Starr, was a “classic example of Dr. Jeckle and Mr. Hyde.” Off the field he was a thoughtful caring person. On the field, he was a ferocious middle linebacker who at times seemed to truly enjoy hitting people.

A fierce competitor, Ray was the heart of the great Packers defense of the 1960s. He was the first defensive player from the Packers’ dynasty years to be elected to the Hall of Fame.

In the mid 1960s, a national sports magazine asked a group of former NFL linebacking stars to rate the middle linebackers of the day. The panel first determined the skills it would seek in the ideal man — strength, quickness, speed, toughness and leadership. Ray Nitschke, the choice as the all-around top man, ranked very high or absolutely tops in every category. "The core of the Packers”… "an inspiration on the field" . . . "gives 100 percent all the time”. . ."has an overwhelming desire to make the play" . . . "without a peer as a leader" . . . panel members remarked as they explained their consensus opinion.

Ray was born in Elmwood Park, IIIinois, and grew up in a tough Chicago neighborhood. He was an all-state quarterback in high school and could have signed a professional baseball contract with the St. Louis Browns.

He opted for a football scholarship at Illinois, where he was shifted to a combined fullback on offense, linebacker on defense. The Packers drafted Ray No. 3 in 1958. Although he started eight games as a rookie, it wasn’t until his third season that Nitschke got the job of middle linebacker for good. Ray was the complete player.

Ray earned either first- or second-team All-NFL honors seven times in eight years from 1962 to 1969. In addition to being a hard-hitting tackler, he was excellent in pass coverage as his 25 lifetime interceptions attest.

Mr. Chairman, honored guests, football fans. It is a real pleasure and honor to have this opportunity to congratulate the current enshrinee class. They are a wonderful group of people, most of them I have known before and I certainly feel they are 100 percent deserving of this recognition.

For Ray this is a combination of an outstanding career that began when he was selected as an All-State quarterback in high school. Ray is known for his fierce tackling and his aggressive play against the runs. There is a play I always remember, it happened in our championship game with Cleveland in 1965. Ray assignment on this particular play was to cover Jimmy Brown out of the back field and the pass perfectly thrown - Jim was about to catch the ball in the endzone, Ray jumped out of nowhere, battled the ball away and saved a sure touchdown. Ray's enthusiasm was, of course, always obvious on the field both in games and in practice, but he was also a very enthusiastic student of the game and was very attentive in squad meetings and shop talks. I remember one week we were preparing for an opponent and in the film study I asked Bill Forrester to keep track of the first down plays, I asked Don Curry to keep a chart of the 2nd down plays, I asked willie Wood if he would watch the 3nd down plays, and I asked Willie Davis if he would keep the short yardage plays and before I had a chance to assign a category to Ray he said what do you want me to keep ''quiet''.

A successful person makes many decisions that have a profound effect on his later life and his career. When Ray met and married his wife, Jackie, he made an outstanding decision. Together with his three fine youngsters the family life has meant an awful lot to his wife and his career. Just a few of the recognitions Ray had, he was voted the outstanding linebacker of the first 50 years of the NFL, he was selected on the all-pro team in 1964, 65 and 66. He was selected on the Pro Bowl several times. Now Ray is a humble man and an outstanding team player. So, I am sure he is very proud of the fact that he played on five championship teams that he was on two winning Super Bowl teams and the fact that he was the first member of his defensive unit to be selected to the Hall of Fame. It is an honor and a pleasure for me to present Mr. Ray Nitschke for enshrinement into the Hall of Fame.

Reverend Clergy, Honored and Distinguished Hall of Famers past and present, football fans from across the country. It is really an honor and a pleasure to be standing in front of the Canton Hall of Fame to be enshrined today into this wonderful, wonderful building that immortalizes the great game of professional football which I truly love and a game that I enjoyed and a game that I tried to play as hard as I could, never dreaming, never thinking that someday I would have the honor of being enshrined and immortalized here in this wonderful city of Canton, Ohio. And I do want to thank the Hall of Fame committee, the Board of Directors and the City of Canton for their tremendous hospitality that they have given my family, my friends from Wisconsin, from all over the country who have come here to be part of this great super weekend.

Words cannot really demonstrate how I felt about Vince Lombardi. I loved him very dearly and he inspired me immensely and gave me a lot of different ways of values that I needed. I needed to be motivated. Coach Vince Lombardi really motivated me I owe a lot to Vince Lombardi.

You know at this particular moment that the Green Bay Packer organization is here and boy I am so proud to have played there for 15 years. I do want to say how important the game of football played in my life. When I was a child, I lost my father when I was three years old and my brother Bob became my guardian and he more or less adopted me and gave me direction and he put me on in the right direction of sports. And I played sports and I played football and football game me a chance to express myself to get recognition and to do something well and I was committed to the game of football and I will never forget the great game that it is and that it gave Ray Nitschke a chance for an education to better himself to be a better human being.

No man is without a great family and certainly I have been blessed with a tremendous family and my brother and his wife and my charming wife, Jackie and our sons, John and Richie and our lovely daughter, Amy. Boy, what I lacked early in life in love and affection, I received from my family that I lacked, when I was a child. And looking back at it all in a nut shell, looking back being a quarterback in high school outside of Chicago, being a fullback at the University of Illinois, being a linebacker with Green Bay Packers, I just wish I could go back 20 years, more than 20 years and do it all over again. Thank you very much and it is really a pleasure to be here immortalized into this football place the Hall of Fame in Canton, Ohio. Thank you so much and God Bless.