"All I ask my blockers is four seconds. I try to stay on my feet and try not to be forced out. Any time they make me do something I’m second best at, they’re defeating me. I beat people by throwing, not running, And, I won’t let them intimidate me.” 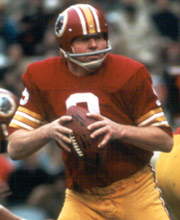 Sonny Jurgensen riddled enemy defenses with picture-perfect bullets for 18 seasons in the National Football League. With Philadelphia for seven seasons and Washington for 11 more, Sonny – one of the finest pure passers ever – accumulated a seemingly endless list of individual records.

Even at the age of 40 in his final 1974 season, Jurgensen won his third NFL individual passing crown. Particularly in Washington, Jurgensen became a folklore-type hero. “I had as much fun playing as anyone,” he once said. “But on the field, it was serious business. I was interested in winning.”

Whether the Redskins won or lost, adoring fans knew Jurgensen would provide game-long excitement, throwing long and short, dissecting defenses, and working on the clock. A classic drop-back passer, Sonny was respected for his ability to deliver the ball at the last moment under the pressure of a vicious pass rush.

In many circles, he was recognized as the best passer of his time. A five-time Pro Bowl selection, his stats include 2,433 completions for an impressive 32,224 yards and 255 touchdowns. “All I ask of my blockers is four seconds, “ the veteran quarterback once explained. "I try to stay on my feet and not be forced out of the pocket. I beat people by throwing, not running. I won't let them intimidate me into doing something which is not the best thing I can do."

In 1969, Vince Lombardi took over the Redskins’ coaching. Many wondered if Lombardi and Jurgensen could work together. Noted for his taskmaster approach to coaching, Lombardi quickly developed a strong admiration for the fun-loving quarterback. "Jurgensen is a great quarterback," the coach said without hesitation. "He hangs in there under adverse conditions. He may be the best the league has ever seen. He is the best I have seen." 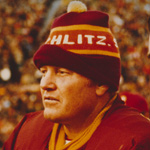 Drafted: 4th round (43rd player overall) in 1957 by Philadelphia Eagles

Reverend Towberman, do you think you could re-establish contact with the Good Lord and please ask him to put his hand on the thermostat and give us some cool air. I would have taken my jacket off and I tried to, but it is stuck.

Mr. Mayor, Mr. Rozelle, Hall of Famers, and those about to be. I am going to have to indulge them for about 20 seconds while the Lord drops the temperature to engage in just a little bit of personal nostalgia. I have been in professional sports for 25 years, there on the hill of victory and in the deep vale of defeat many times. I have experienced the joy of two Super Bowls and one World Series but today is the day of highest exhilaration, deepest fulfillment and greatest joy of my life in sports because I have the honor to present two of my dear, oldest and warmest friends to the National Football League's Hall of Fame.

The first is Christian Aldolph "Sonny" Jurgensen. It was 1959, behind the journeyman line, Sonny Jurgensen had been sacked, pounded, weakened and flattened. And once again he had passed the Redskins to victory with 10.80 percent accuracy and for over 400 yards. Coach Lombardi, not renowned for his entomomancy, walked to the dressing room and he said this to the press "Sonny Jurgensen is a great quarterback. He may be the greatest this league has ever seen; he certainly is the best I have ever seen. He hangs in there in the worst of diversity. Ire's no longer a young man, but he is all man. He will surely be in the Hall of Fame.

Vince Lombardi was right on all accounts. Like the way he said Sonny was the best quarterback the NFL has ever seen. A more intelligent courageous leader, a more dedicated competitor, a more talented performer would be impossible to find. What a record. For five years he led the National Football League in passing, for five years he passed for over 3.000 yards. 25 times he passed over 300 yards in one game and 5 times he passed for over 300 yards a record never beaten. I will never forget the day he reported to the Redskins. It was halleluiah day in washing ton. And Coach Bill McFee said we have obtained quarterbacks today with superb tacking skills, the perfect gentlemen to maintain void in the face of adversity, the hallmark of leadership, intelligence across the field and indomitable determination. Sonny has al] this and then some. For 10 years he showed Washington all this and then some. Where are Jurgensen events that yet stand in my mind as a clear, color, motion picture. That cold dreary day in November that we were trailing Dallas 31-20 with 90 seconds to go and like Herl in the magician he waved the wand that led the Redskins toward an impossible 34-31 victory. Against the Giants. down by 10 with 2 minutes to go, he hobbled into the game with a bad leg, caught Billy Kilmore on the back side, who hobbled out of the game with a bad leg. and then completed 11 straight passes for an impossible victory.

This is the Sonny Jurgensen that Vince Lombardi called all man. Sonny.... Coach Lombardi is up there today admiring down with the pride of a coach and the love of a father. You take your place in there and be proud of it.

Thank you, Mr. Williams. I am very deeply looking forward to this occasion today. All I can say is thank you to Mr. Williams and to thank all the people who broke the road that leads to this destination and it would take me to the wee hours of the morning, because in a team game, and football is the ultimate team game, everybody depends on one another, everybody contributes to the success. From the guy who sells the tickets to the player who carries the ball for the winning touchdown. I guess one of my predecessors put it distinctly when he said that quarterbacks get all the credit when they win and all the blame when they lose. The blame maybe correct, but we all make errors, but the credit is in the wrong place. Quarterbacks only contribute to teams; teams win games and not individuals. I can be sure of that statement just as sure as I am that my parents had a direct foreangle on my success, because of their interest in my career as far back as I can remember. Understanding, guidance and sacrifice. It was easy for me to get involved in sports. They were my whole life and to a certain extent, they are now. Like a lot of you I grew up in a community that emphasized sports especially at the high school level, Wilmington. North Carolina. I played under a great coach by the name of Leon Brogden. He had six championship teams in all three sports. football, baseball and basketball. There was a reason for that. He believed that character was the main ingredient and that is what he taught and that is why he was successful, and I will never forget him.

When I look back on my career, I consider myself very fortunate just to have the opportunity to play professional football. You remember I went to Duke University, I think we only threw the ball something like 50 three times my senior year there. I really wasn't schooled for coming into professional football. If it hadn't had been for an assistant coach there by the name of Clarence H. Parker who is enshrined right here in this Hall, telling professional scouts that I had the God given talent to throw the football. I doubt very seriously that I would ever have the chance to play. It is things like that that make up the trip here. You know when you play 18 years you get to know a whole bunch of people and I'm looking at them. That he made throughout the years that you share your highs and lows with. it's the great people that you meet and come in contact with in this game that make it such a great game period the joys of winning and the falls of losing is all but a small part of the total commitment and the involvement that it takes. The great guys that I have meant and played with and against them in this game are all a part of the reasons that I'm standing here today.

If I had to pick one highlight it would have to be the year 1969. Out of all the things that happened to me in football, it was the year under Vince Lombardi. I never worked so hard and was in better condition, the first year I played the only year I played without the back hitting my stomach and was never better prepared nor did I have more fun under that one year.

It is a privilege and honor to be enshrined here with him and all the other greats that surround me. All I can say is, thanks.