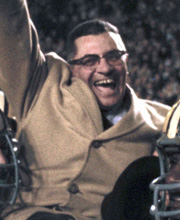 Vince Lombardi, at the age of 45, when most pro football luminaries have made their mark and passed from the scene of a young man's game, was embarking on the dual adventure of being head coach and general manager of the Green Bay Packers.

His previous NFL experience consisted of five years as an assistant coach with the New York Giants. Amazingly, Vince basked in the limelight for only one decade. Cancer struck him down just as he seemingly was about to create a "second miracle," the rejuvenation of the Washington Redskins. In remarkably few years, Lombardi became the symbol of excellence for an entire sport.

There have been few teams in pro football history in a more downtrodden state than the Packers were when Lombardi was first approached about the coaching job in 1959. Vince had gained a reputation with the Giants for his stylish, thorough, and imaginative craftsmanship on offense. He seemed to have all the credentials to be a successful head coach.

Lombardi insisted on a five-year contract to give his building program a fair chance but he set his plan into action at his very first team meeting. "I have never been on a losing team, gentlemen, and I do not intend to start now!" The Packers improved from 1-10-1 in 1958 to 7-5 in 1959. The next eight years, the Packers were in a class by themselves, winning six divisional and five NFL championships and achieving victories in Super Bowls I and II.

In 1968, Vince retired as the Packers coach but retained his general manager's duties. He found the hours "out of action" boring and, in 1969, moved to Washington, where the Redskins were struggling much the way the Packers had 10 years earlier. Remarkably, in his first season with the Redskins, Lombardi created an equally amazing result – a 7-5-2 record.

Governor Gilligan, Mr. Mayor, Mr. Commissioner, football greats, and football fans. I think I should ad Lib for a minute and say that one of those great trades of mine took Sam Huff away from the Giants and if he's not in the Hall of Fame, he should be pretty soon. A trip to the Hall of Fame is truly an inspiration to a member of the National Football League. To see it exhibits and to stand as it were in the shadows of those great men in who’s reflected glory, we all ask to be long remembered. It brings about a full realization, said that we owe to them and a resolution that we will never forget it, and our stewardship of this heritage they have given us. Vince Lombardi did not invent professional football and he did not find the National Football League, but he embellished both of them to a degree never surpassed and seldom if ever, equaled. He made winners out of his players an losers out of his opponent. He won two Super Bowls in succession, key one three consecutive National Football League championships, and neither of those have ever been attained before or since; he won five National Football League championships in Seven years. He lost a playoff game once in 1960 and never lost another. He never had a losing season. Vincent, and adding your father to this notable company, which includes my own father, we pay homage to Vince, but we also and enable and enrich this Hall of Fame in much the way that Vince enable and enrich the National Football League, During the few brief years that were allotted to him. I think it's a great day for Vince Lombardi, also a great day for the Hall of Fame.

Governor Gilligan, Mayor Cmich, Commissioner Rozelle, Reverend Clergy, honored enductees, friends of football, it is with pride that I acknowledge on behalf of my mother, and sister the induction of Vincent T. Lombardi into the National Football League Hall of Fame. Pride, that my father accomplished those things that would merit such an honor, and pride in the knowledge that my father together with the other members of the Hall of Fame played a role in making the National Football League what it is today. That fact witnessed by the prestige an high place of honor, accorded enshrinement here in Canton. If my father were here today, he would indeed be very pleased, for although there has been much written and said about him, few people realize how strongly my father felt about the National Football League. Few people realize how proud my father was to be a part of the tradition and the image of the National Football League and few people realize how much my father cherished his Association with the players and the coaches, and the owners and the other members of the National Football League. Obviously, you do not earn an honor such as this on your own, it takes the help and cooperation of many, many people, and my father was no exception. Because my time is limited, I cannot thank all the people who should share this honor. I sincerely hope that it is enough that they know who they are. However, I would like to take this occasion to call attention to, and to thank one person in particular. that person through love and understanding, more than any other, was responsible for the success my father did enjoy, that person, Marie Lombardi, my mother. I thank her and I thank you.