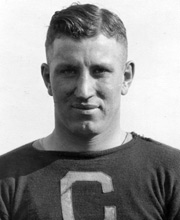 In 1922, Guy Chamberlin, the player-coach of the Canton Bulldogs, recruited Roy (Link) Lyman, a 6-2, 233 pound tackle from the University of Nebraska, to play pro football. Lyman was no stranger to Chamberlin, who was also a Nebraska alumnus.

Chamberlin’s recruit went on to star with the Bulldogs during their back-to-back undefeated seasons of 1922 and 1923. The following season the Canton franchise was sold and several Canton players, including Lyman, moved on to Cleveland, where the Cleveland Bulldogs captured the 1924 NFL title. Lyman split the 1925 season between a new Canton franchise and the Frankford Yellowjackets.

Following the 1925 season he joined the Chicago Bears during that team’s famous cross-country barnstorming tour that featured Red Grange. Lyman remained with the Bears for the rest of his career that ended almost as it had begun. The Bears won the NFL title in 1933 and a divisional crown in 1934, Lyman’s final season.

Many pro football historians believe that the constant shifting by defensive players before each play in modern professional football can be traced back to Lyman, who regularly resorted to similar ploys. His sliding, shifting style of defensive line play confused his opponents and made him one of the most respected players of his time. Lyman explained that the idea of shifting was an instinctive move to fool a blocker. He had a unique ability to diagnose a play and many times he would make his move just as the ball was snapped.

Whether it was luck or a result of his outstanding play, Lyman experienced just one losing season during his 16 seasons of high school, college, and professional football. A contributor to the end, Bears coach George Halas insisted Lyman was stronger and tougher during his last two seasons than when he first joined the team eight years earlier.

Thank you very much. It gives me a great deal of pleasure to be here to present a man that I've known for a great many years, as a matter of fact, he too worked in a steel mill in Canton, the best one, naturally. His name, Link Lyman. Even the name has a rhythmic, euphonious sound, and I can assure you that on the field he had all of the attributes of a Rogers-Hammerstein hero. He could shift easily; he had a sliding style of defense that is copied to this day and he turned out to be one of the outstanding tackles in all the history of college and professional football. Link Lyman has a winning way with him. In sixteen seasons, both in college and professional football, he was with only one team that was not a winner. And I dare say that was not Link's fault. At the University of Nebraska, his senior team was the greatest in the history of The Cornhuskers. As a pro, his first three teams lost only one game and they won three straight world championships. George Halas will tell you that Link Lyman was stronger, and tougher, and faster at the finish of his playing days as he was at the very start. It's just as well then, that Link Lyman has retired otherwise, some of the present-day players might be in for a rude awakening as they tried to carry the ball to the goal. I welcome to Pro Football's Hall of Fame, this agile giant of long ago from San Marino, California all energetic insurance man today, Mr. Link Lyman.

Thank you, Mr. Umstattd for that wonderful introduction. And may I salute the dignitaries here and all of you good people of the surrounding area and Canton and tell you what a wonderful event this has been to me. I have never seen such hospitality; I have never seen the likes of what is going on here now in Canton. First, I would like to make a quick comparison here, that it really Lakes some doing to switch a western Nebraska cowpuncher into a steel man. But through the help of some able fellows like the Timken people and others here, we made the switch. And enjoyed the city of Canton and its people for about three years here and we have always remembered the happy events that went on here. Looking at this field, I am reminded of Meyers Lake, which is not too far from here, which consisted of just a solid, hard, clay, field. But on that field professional football history was made. And I just hope that some of the shadows, some of the things that went on, on that field here in Canton, that some of those great events in which Jim Thorpe, Joe Guyon, Ed Healey , Trafton, and hundreds of great All-Americans, were they made history and whom only a few have been honored as we are being honored today will eventually be honored over the years to come. That would be my wish right today, if some of those things that happened over there could be transplanted to this great stadium here, and the memories of those great athletes who so admirably carried on in great fashion for pro football.

Myself, there are probably one or two hundred other fellows, that I would like to see receiving this honor today, but I guess their time will come. So, let's simply close this by saying that this is a start of one of the nation’s greatest events, as the future will prove. Because the parade, the event here, The Hall of Fame, whom your great people here in Canton have built, headed by the Timken group will certainly grow into something I think, and truly believe if you folks will have a vision and accept the challenge, that will compare with the Pasadena Rose Parade and the great Pasadena Carnival out there and the football game. It's yours to have if you want it. If you will work hard enough it can be that big an event. May God bless each and every one of you and please have that vision and keep making this a bigger and finer Canton for our Hall of Fame. Thank you very much.