"You’ve got to do your best against the man opposite you on every play. You’re less than a man if you let this guy win a battle when he shouldn’t.” 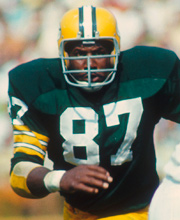 Willie Davis’ pro football career got off to a discouraging start. The Cleveland Browns drafted him in 1956, but Army service intervened and he didn't join the team until 1958. In his first two seasons, he played briefly at several different positions. Just when he appeared ready for a regular offensive tackle job in 1960, he was suddenly traded to Green Bay.

Willie was surprised and upset and briefly considered quitting. However, the Packers coach, Vince Lombardi, quickly assured Davis that Green Bay needed a top-flight defensive end and he thought Willie was the man. "I consider speed, agility and size to be the three most important attributes in a successful lineman," Lombardi told Davis. "Give me a man who has any two of those dimensions and he'll do okay. But give him all three and he'll be great. We think you have all three."

Davis also possessed the intangibles – dedication, intelligence, leadership – that enabled him to rise a cut above almost everyone else. He was also as durable as he was dedicated, never missing even one of a possible 162 games in his 12-year tenure.

Davis, a hard-hitting, big play defender, frequently dropped opposing ball carriers or quarterbacks for losses and or caused them to lose possession of the football. Always on the prowl, he recovered 21 opponents' fumbles during his career, just one shy of the record when he retired.

Davis’ outstanding play did not go unnoticed. He was an All-NFL selection five times in six years from 1962 to 1967 and selected to play in five consecutive Pro Bowls. Undeniably Willie Davis was a major factor in Green Bay’s winning tradition of the 1960s that included five NFL championships and six divisional titles in eight seasons. Included in the historic championship run were impressive victories in the first two Super Bowls. 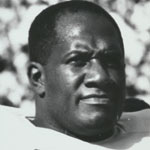 Thank you very much Jim. Enshrinees, Mr. Mayor, Clergy, Pro Football board of trustees, ladies and gentlemen. Many times, I have said Eddie Robinson has to be the luckiest man in the world because over my tenure of coaching I have been privileged to coach some of the finest football players in America. And everything that Eddie Robinson has achieved he has done it on the shoulders of American youth in my being here today, I'm still riding on the shoulders of America youth.

This today is one of my most gratifying moments in football period to have the honor and privilege of presenting and seeing the enshrinement of Willie Davis, one of the finest football players to ever perform at Grambling. Willie Davis represents Grambling football. Willie Davis is a standard at Grambling. I realized that it is not only a thrilling and moving experience for me to be here today, but it is a special significance to Willis family; His mother and father, to his wife and children, and many fans of Willie Davis all over the country. The Packer fans, the Grambling fans, the Los Angeles fans and the Arkansas fans.

Today Willie will receive the most prestigious award in professional football. For excellency on the field of play. Willie distinguished himself as the finest defensive end in the game when he played in the 1960s. Willie was always a great inspiration to his teammates in college and professional football. And inspiration to his coaches because from the very moment I met him and talked to him, I knew he was committed to excellency. It is frightening now as I stand here and think what might have happened if my pride would have overruled me an I had walked out of Willis home when he couldn't make up his mind whether he wanted to go to Grambling and frankly his mother was not too concerned about him playing football, but before I closed the door I walked back and said, “Mrs. Archie, one thing I forgot to tell you that if Willie Davis comes to Grambling, he'll be in Sunday school and church every Sunday.” I had Willie Davis.

Willie Davis represents to me the most admirable of all virtues. he represents human courage. He's been a model indetermination, perseverance and self-likeness. As Willie performed for the Browns and Packers, he was a complete defensive end because he played the rushing game and the passing game with reckless abandons. For 10 years, Willie was the standard of excellence by which defensive ends were judged under in the league. He played two years with Cleveland, 10 years with Green Bay. He didn't miss a game. He played them all. He started as defensive end. He was part of six divisional championships, seven years selected to the all pro team, captain of the Packers defensive unit. played in the first 2 Super Bowls in the Packers won them. He recovered 21 fumbles, it was one less than the record at that time period and talking with Willie's teammates, Ray Nitschke says, “the thing that made Willie Davis was the burning desire to win.” Herb said it was his guidance and leadership. Dave said it was his smarts, his intelligence and his quickness. Willie was privileged to play for two of the greatest minds in professional football, Paul Brown at Cleveland for two years and the late Vince Lombardi. You know it is the coaching dreams and coaches’ greatest rewards to see their players after retirement make a successful adjustment to another career continued to make worthwhile contribution to our society. Willie did this with his great commitment to excellence.

Willie played high school football in Texarkana, came to Grambling with that burning desire and dignified the caption-ship at Grambling. To be a captain of Grambling Football team now, you are judged by the standards of Willie Davis. What we always tell our football players is that you can only play for four years in college and if you are good enough you will go to professional football, but you have to live in the most competitive society in the world once you are through playing college football and pro football. Willie did it his way. He earned his degree at Grambling. While playing professional football he earned his master’s degree from the Un. of Chicago. Willie is one of the most outstanding young businessmen today. I feel that Paul Brown and the late Vince Lombardi would agree with me today when I say Willie represents the embodiment of what is good, fine and righteous in our society.

I am pleased at this time to present for enshrinement one of Grambling's finest sons, one of Green Bay's and professional football's finest defensive ends, one of the country's finest young businessmen and one of America's finest Americans ... Willie Davis.

Thank you coach Robinson. I also want to thank all the coaches that touched my life, my high school coach, Nathan Jones, my college coach you just heard from, and, of course, my 2 professional coaches Paul Brown and Vince Lombardi. I want to thank the sports writers and the members of the Hall of Fame committee. I want to thank my teammates, some of you like Herb Adderley, Ray Nitschke, Dave Robinson and, of course, Jim Ringo. I also want to extend a special thanks for my friends who came here from many places across the country, Jack McKeithan, Jerry Vehlier and Ben Barken associated with the Schlitz Brewing Company and also  I want to thank my family and in particular my mother Because it was her who saw me through sometimes when I didn't know what I was going to do. This is a very special occasion because it is the first time my family has ever been together and I am truly proud of this moment because it was through football that I learned how to win And it was through football that I learned how to enjoy the thrill of success and it was also from football that it developed the will to succeed.

Last year I had the pleasure of presenting Herb Adderley here and also Mrs. Lombardi was here. Mrs. Lombardi was scheduled to be here today and we all, of course, know the unfortunate and sad story of coach Lombardi. If those two people were here today, it would truly make this a perfect day.

coaches have been a very important part of my life and I would just like to close today by reading a poem of the last speech from Vince Lombardi, a man I truly loved and admired, but most of all I think these words reflect my feelings.

I owe almost everything to football which I have spent the greater part of my life in. I have never lost my respect, my admiration and love for what I consider a great day and each Sunday after battle, one group savors victory, another group lives in the bitterness of defeat. The many hurts seem a small price to pay for having won and there is no reason at all that is adequate for having lost. To the winner there is 100 percent elation, 100 percent laughter, 100 percent fun and to the loser the only thing left for him is 100 percent resolution and 100 percent determination and it is a game I think a great deal like life that it demands a man’s personal commitment towards excellence and towards victory; even though you know ultimate victory cannot be completing one, but it must be pursued by all of ones might. And each week there is a new encounter, each year there is a new challenge. But all the rings, and all of the money and all of the color and all of the display, they linger only the memory, but the spirit, the will to win and the will to excel, these are the things that endure and these are the qualities, of course, that are so much more important than the events that occasion them and I would like to say that the quality of any man's life has to be a full measure of that man's personal commitment to excellence and to victory regardless to whatever field he may be in.

I have known bitterness and I have known the taste of victory. Today I'm very proud and gratified that I can stand at this moment in this occasion. Thank you.