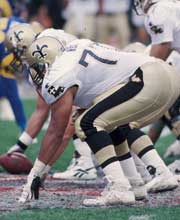 The New Orleans Saints drafted tackle Willie Roaf out of Louisiana Tech in the first round eighth player overall, in the 1993 NFL Draft. He was the first offensive lineman selected in that year’s draft.

Roaf started all 16 games at right tackle and did not miss an offensive snap during his first season and earned All-Rookie honors. The following year he was switched to left tackle and performed at a level that earned him more national accolades. He was voted to the Pro Bowl for the first time, named first-team All-Pro, All-NFC, and honored as the NFLPA’s NFC Offensive Lineman of the Year for the first of two consecutive seasons.

A knee injury shortened Roaf’s 2001 season to just seven games. Then, just prior to the next year’s draft Roaf was traded by the Saints to the Kansas City Chiefs in exchange for a third-round draft pick. He rebounded from his injury to regain his form. Roaf earned All-Pro honors in three of the four seasons he played with the Chiefs. He was a key part of Kansas City’s offensive line that helped the Chiefs lead the NFL in points scored in 2002 and 2003. The club also led the AFC in total yards in 2003 and the NFL in 2004 and 2005. 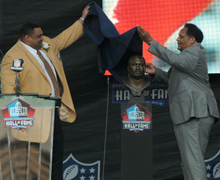 I got John Randle over here messing with me during the breaks.  I told him I'm going to try to keep it together though for all these guys.  It's such an honor.  Wow, what an induction.  You know it's an offensive lineman.  I didn't get singled out in front of a large audience very often, and when I did, it was usually by a referee who was singling me out by saying, "Holding number 77."  That's not going to happen today.  And it wasn't too often when I played.

What an honor it is to be here today to have my father, the man who is such a major part of my life and success, here with me.  It's an unbelievable feeling.  Thank you, Dad.

You know, my dad always found time to be a part of my life. A successful dentist with a busy schedule, he drove from Pine Bluff, Arkansas, to every one of my home games in college and my pro career.  He only missed one game, and that's because my brother had another game in St. Louis at the same time.

He put a lot of miles on his cars, and he didn't sell them.  He would overhaul them and get a new motor most of the time.  So he put another hundred thousand miles on it when he got done with that hundred.

My mom, Andree Layton Roaf, passed away in 2009.  My mom was always my inspiration.  Her love and guidance made me who I am.  She is so, so much a part of the reason I'm here today.  I'd also like to thank my grandparents.  I have one still living, my beautiful grandmother Phoebe Layton.  She's in the audience with us.  She is joined by my Aunt Mary from D.C.

In Arkansas on Sundays at the church we'd normally go to my other grandparents' house, my daddy's parents, Arthur and Charlotte Roaf.  And if you didn't cheer for the Cowboys, he'd kick you out of the house.  He was a true Cowboy fan.

To my brother, Andrew Roaf, and my sisters, Phoebe and Mary, you have no idea how much you mean to me and how much I appreciate all that you've done for me.  I love and respect each of you.  I couldn't have been blessed with better siblings.

To my children, Jordan, Alexis, Dylan and Carrington, I know having a father as a professional athlete makes it difficult spending as much time as needed, but I loved you then and I love you now, and I am so proud of all of you.

Before I go on, I'd like to thank the Hall of Fame selection committee.  I know they had a tough job.

I and the other inductees are so happy we were chosen this year.  When I was notified that I was elected into the football Hall of Fame, I was so happy.  I felt a strong sense of pride.  Proud to have earned such an honor.  Proud to be a part of the legends of the game.

But at the same time, I felt an overwhelming sense of humility, realizing that being elected into the Hall of Fame wasn't something I did alone.  It was the result of the things I learned from others.  Like the other Hall of Famer, the first New Orleans Saint, city champ, Rickey Jackson, Sam Mills, Jim Dunbrousy, Wayne Martin, Big Golf, Coach Dick Vermeil, Billy Long, Bill Kuharich, Will Shields, Eddie Kennison, Tony Richardson, Trent Green, Priest Holmes, Brian Waters, and Clarence Jones, and all of the offensive line coaches that I had over my 13 year career.

I started playing football at a young age, playing in the yard and around the neighborhood.  That led to organized football with my brother who was eight.  Our coach, L.G. Robinson was a neighborhood coach and was the neighborhood mailman, so he had to get off work and then come take us to practice every day to make sure we showed up.  Football was the biggest sport in Pine Bluff (Arkansas), and it was very, very competitive back then.

At Pine Bluff High School we had some real good football teams, and we got beaten my senior year by Fort Smith North Side in the semifinals.  I'd like to thank my high school football coach, Marion Glover, as well as my high school basketball coach, Joe Ball, who is here with us tonight.  Thank you, Coach, for being here.

Interestingly enough, I'm the second to join the Hall of Fame for my high school.  Following in the footsteps of the great Don Hutson who played for the University of Alabama and the Green Bay Packers in the '30s, and the '40s.

The only school that offered me a scholarship initially was Louisiana Tech, and it was a blessing.  I went there and learned from a great coaching staff that included head coach John Piece, my line coach, Pete Perot, Joe Taylor, Jerry Baldwen, Steve Itsminger, Joe Fergison, and Pat Tilley.

From them I got the individual guidance and direction to help me develop my skills at a program that was just going Division 1.  We were and still are a family, and I grew up a lot in Ruston (Louisiana).

As a result of the hard work at Louisiana Tech, the New Orleans Saints, Tom Benson, and general manager Jim Finks and head coach Jim Mora drafted me in the first round.  I was blessed to have nine wonderful years with the Saints organization, especially winning our first playoff game in the 2000 season.  I will forever be thankful to the Saints for drafting me.

The Kansas City Chiefs organization gave me another chance to play football after suffering a serious knee injury.  They were the only team that would really give me another chance to play, and I want to thank the Hunt family for bringing me to Kansas City, especially Lamar Hunt and Carl Peterson.  I played on one of the best offensive lines in the league while I was in Kansas City, and we set the tone for the team every week. I wouldn't have gotten the most out of my career if it wasn't for my agent I had for my whole career.  Lamont Smith from Peter Schaffer, thank you, guys.

I'd also like to thank some of the outstanding football players I played against, including Mike Rucker, Jason Taylor, Chuck Smith, Reggie White, Shawn Jones, Tim Harris, Kim Heart, Ken Harvey, Mike Mamula, and Willie McGinnis.  They are just a few guys that I had intense battles with, and what I do miss is the one on one battles in the trenches.  The game within the game.  I loved having to go out there and compete against the best. And pulling it out for the big touchdowns always got the team excited.  I will never be able to replace that.

I played with a lot of great athletes in my career.  To the guys that's I missed tonight and all the teammates I played with, thank you for being a part of my career.  I know I worked hard and believed in myself and always strived to be the best, but I never dreamed that one day I would be in the Hall of Fame.  I was just thankful every day that I was able to play the sport I love.

To know that my bronze bust will be in the Hall of Fame forever is just unbelievable.

To my fellow Hall of Famers, just as I strive to be a good teammate in high school, college and the pros, I promise you this:  I will always be a Hall of Fame teammate you can be proud of.  Thank you for welcoming me to this new team.

Finally, to my mother, the Honorable Judge Roaf, looking down on this ceremony.  No, mom, I did not become a doctor, a lawyer or a brain surgeon, but I did become a Pro Football Hall of Famer, and I know you're proud of me, and that's what matters to me the most.  Thank you all for having me.  This is such a blessing.