In 1960, the Dallas Cowboys became the NFL's first successful new team since the collapse of the All-America Football Conference 10 years earlier. Clint Murchison Jr. was the new team's majority owner and his first order of business was to hire Tex Schramm as general manager, Tom Landry as head coach and Gil Brandt as player personnel director. 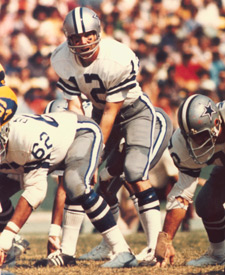 This trio was destined for almost unprecedented success in the pro football world but the "glory years" didn't come easily. Playing in the storied Cotton Bowl, the 1960 Cowboys had to settle for one tie in 12 games and Dallas didn't break even until its sixth season in 1965. But in 1966, the Cowboys began an NFL-record streak of 20 consecutive winning seasons. That streak included 18 years in the playoffs, 13 divisional championships, five trips to the Super Bowl and victories in Super Bowls VI and XII.

Dallas won its first two divisional championships in 1966 and 1967 but lost to the Green Bay Packers in the NFL championship game each year. Similar playoff losses the next seasons were followed by a 16-13 last-second loss to Baltimore in Super Bowl V following the 1970 season. The Cowboys were typified as "a good team that couldn't win the big games."

But they dispelled such thought for good the very next year with a 24-3 win over the Miami Dolphins in Super Bowl VI. The Cowboys were Super Bowl-bound three more times from 1975 to 1978. They lost to Pittsburgh in extremely competitive games in Super Bowls X and XIII but defeated the Denver Broncos 27-10 in Super Bowl XII. During their big years of the 1970s, the Cowboys were led by such future Pro Football Hall of Fame members as quarterback Roger Staubach, tackle Rayfield Wright, defensive tackles Bob Lilly and Randy White, defensive back Mel Renfro and running back Tony Dorsett.

In 1967, Murchison announced that the Cowboys would build their own stadium in suburban Irving, Texas. A new Dallas pro football era began on October 24, 1971, when 65,024-seat Texas Stadium was opened.

The Cowboys of the 1970s and early 1980s were known as "America's Team," an outfit that was just a step ahead of almost every other club when it came to image-enhancing promotions such as The Dallas Cowboys Newsweekly with a circulation of 100,000, sales of Cowboys souvenirs and apparel and the famous Dallas Cowboys cheerleaders.

The Cowboys suffered their first losing season in two decades in 1986 and fell all the way to 3-13 in 1988. H. R. "Bum" Bright, who had purchased the Cowboys from Murchison in 1984, sold the team to Jerry Jones in 1989. Jones named former University of Miami coach Jimmy Johnson to replace Landry, who finished his career with 270 victories, third most by any coach in history.

Johnson's first team won only once in 16 games but some daring trades and shrewd selections in the annual NFL draft - that included Hall of Fame quarterback Troy Aikman - quickly returned the Cowboys to championship status in Super Bowl XXVII, the fourth season of the Jerry Jones regime. They followed with a second straight world title in Super Bowl XXVIII. In March 1994, college coach Barry Switzer replaced Johnson as the Cowboys third head coach. The winning continued under Switzer, as the "Team of the Nineties" won its third Super Bowl in four years with a 27-17 victory over the Pittsburgh Steelers in Super Bowl XXX. In 1998, Chan Gailey replaced Switzer as the Cowboys' head coach followed two years later by Dave Campo and then Wade Phillips in 2007. Jason Garrett was named only the eighth head coach in Cowboys history in 2011 after serving as the teams interim head coach midway through the 2010 season.