The ELEVEN is a $2.2 million multi-year project of ArtsinStark and The Pro Football Hall of Fame with the following goals:

Here are the eleven greatest moments in professional football in chronological order, as selected by The Pro Football Hall of Fame.

FIRST MOMENT – the Birth of the NFL, 1920 sculpture by artist Michael Clapper was installed on August 1, 2014.

It celebrates the NFL being created in Canton, OH on September 17, 1920. “Birth” is placed very close to where the NFL agreement was actually signed inside the Hupmobile showroom of Canton Bulldogs owner Ralph Hay. Today the Frank T. Bow Building at 201 Cleveland Ave SW stands on that spot. More than 80 artists from 30 states responded to a national invitation to create “The Birth.” The pre-rusted steel pedestal celebrates the steel industry of Northeast Ohio and includes the ten charter members laser cut into it. The stainless steel top, or “seed pod,” is giving birth to the NFL, whose letters which have been placed sideways, are made of 30-some pieces of dichroic glass which was developed by NASA for satellite mirrors in outer space. 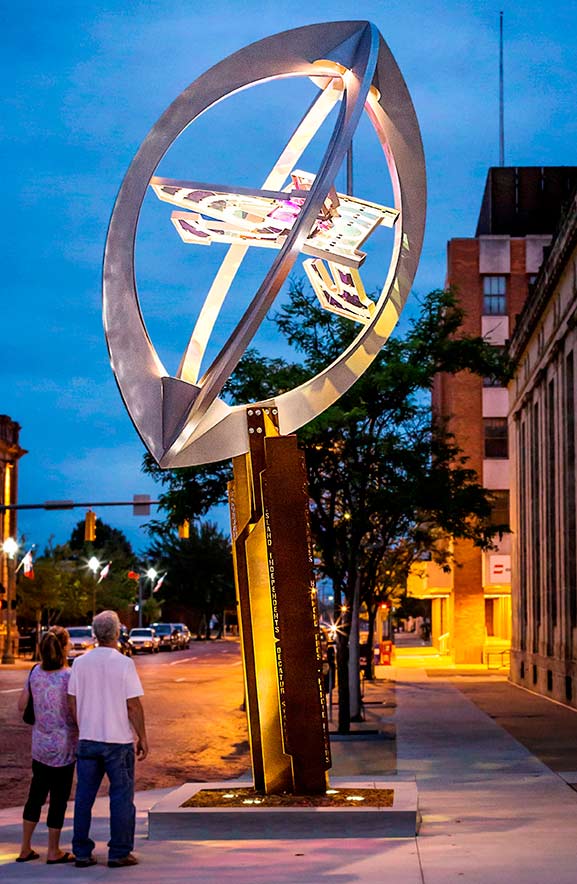 It celebrates NFL Commissioner Bert Bell’s idea of teams selecting college players by inverse order, based on how they finished the prior season, which changed the future of clubs overnight. The 5-bronze-figure creation by artist Gail Folwell features a man in a suit hiking the ball among four gladiatorial- looking football players. The man in the suit is Bert Bell, owner/founder of the Philadelphia Eagles and later NFL Commissioner. But Folwell says this could be any owner of any team, surrounded by his players. 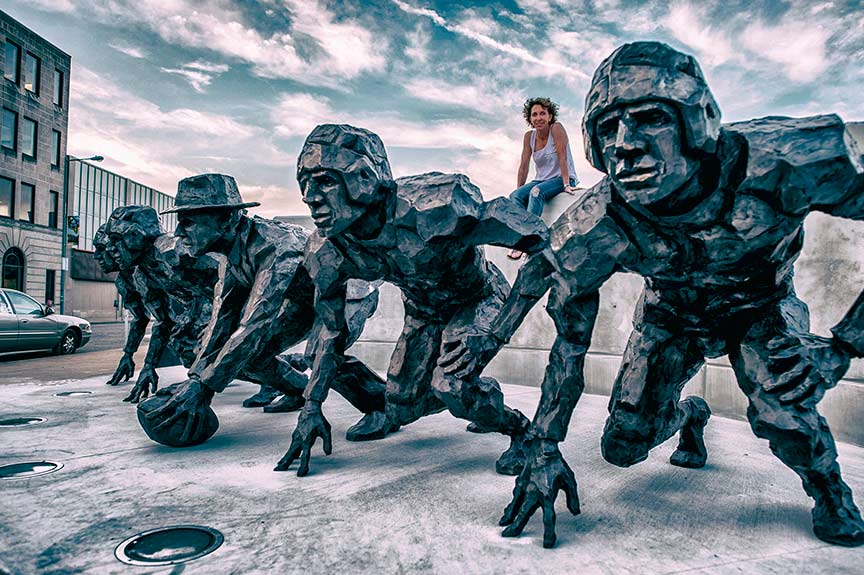 His art is abstract. It meant to capture the essence of an idea. Here in steel and granite is that moment in the 1960s when the AFL and NFL — after battling endlessly — decide to merge. The sculpture is about becoming greater than the sum of the parts. In the 1960s, the two leagues battled endlessly, and this sculpture straddles the sidewalk as the two sides reach out to become one. One side represents the more traditional NFL, and the other the upstart AFL. The artist wants the viewer to think about this for himself and won’t tell which side is which. Finally there may be a “defense” shape or a football helmet design in “The Merger,” and the sails, as the artist calls them, on top, light up at night and change colors every ten seconds. 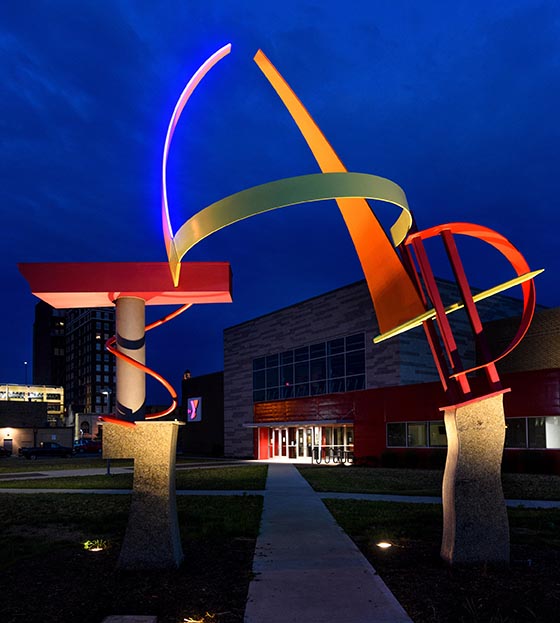 FOURTH MOMENT – the Reintegration of ProFootball, 1946 mural by artist Paul Collins was installed on August 5, 2016.

Although there were a handful of African American players in the early days, from 1934 to 1946 pro football had none. That all changed in 1946 ( a full year before Jackie Robinson began playing professional baseball) when the Los Angeles Rams signed Woody Strode and Kenny Washington, and the Cleveland Browns signed Marion Motley and Bill Willis. These four heroic players are celebrated in the documentary “The Forgotten Four.” Artist Paul Collins created the original painting upon which this 30 foot by 90 foot banner mural is based. He purposely made one of the hands on the football white and the other black to emphasize the importance of unity as America moves forward into the 21 century. 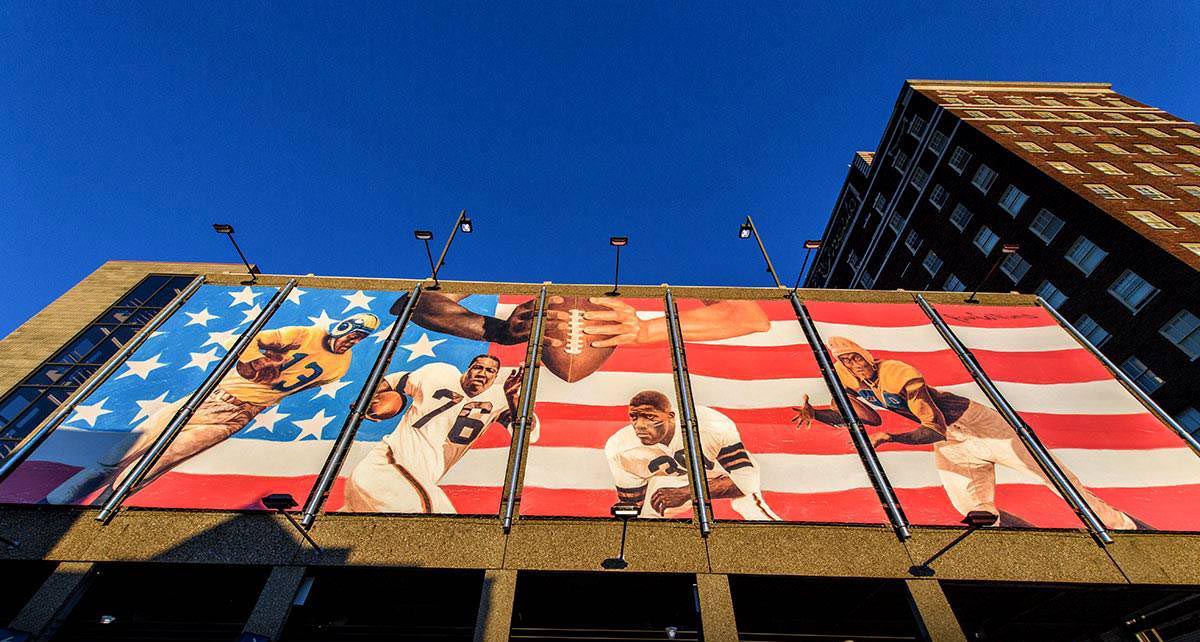 This was the year that Joe Namath, star quarterback of the AFL’s New York Jets, predicted victory over the NFL’s heavily favored Baltimore Colts, and, in one of the greatest upsets in sports history — did exactly that with a final score of 16 – 7. 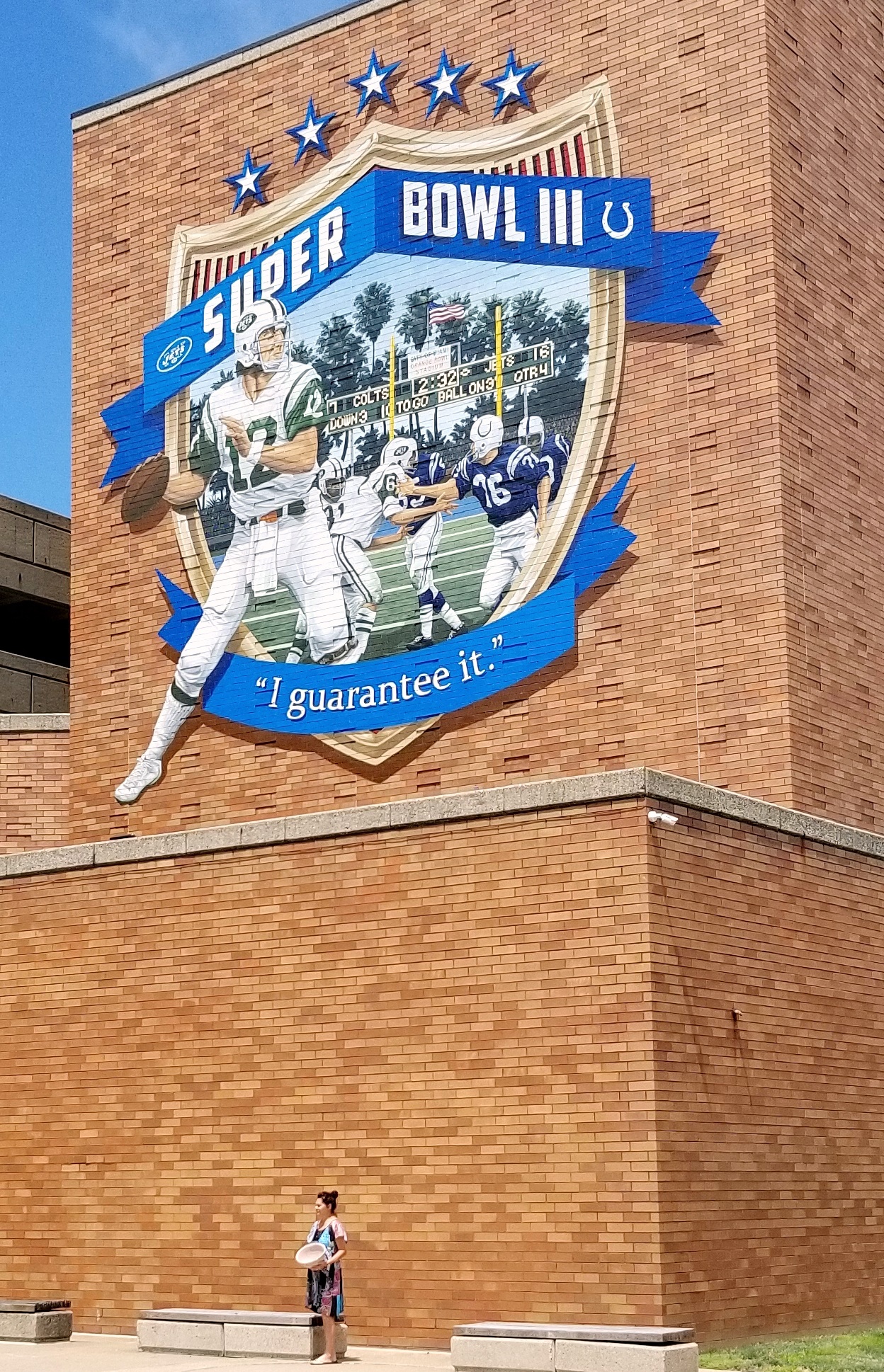 This moment celebrates the phenomenal success of NFL games telecast during prime time on weeknights which began on September 21, 1970, with the Cleveland Browns facing the New York Jets in the debut of ABC-TV’s Monday Night Football. 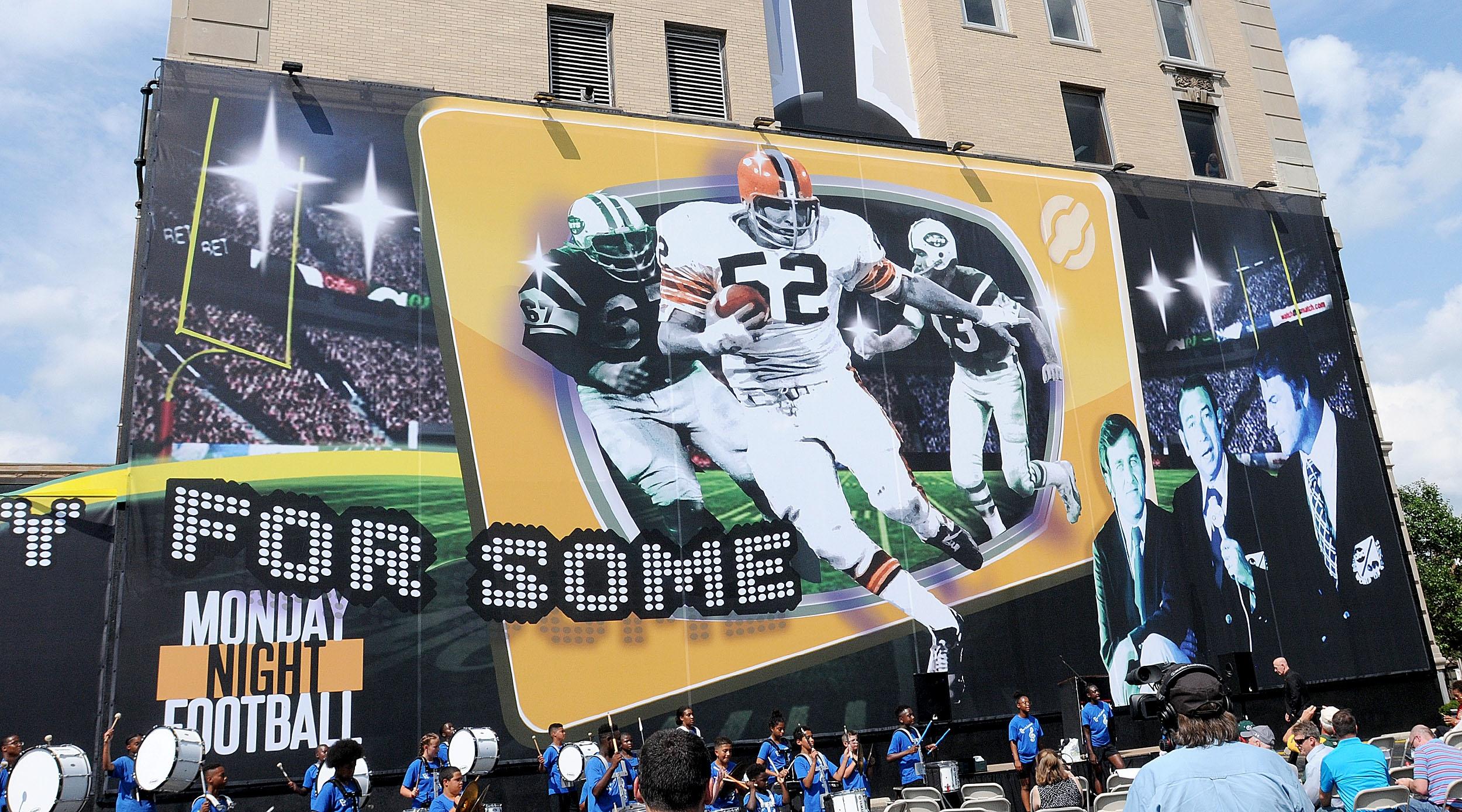 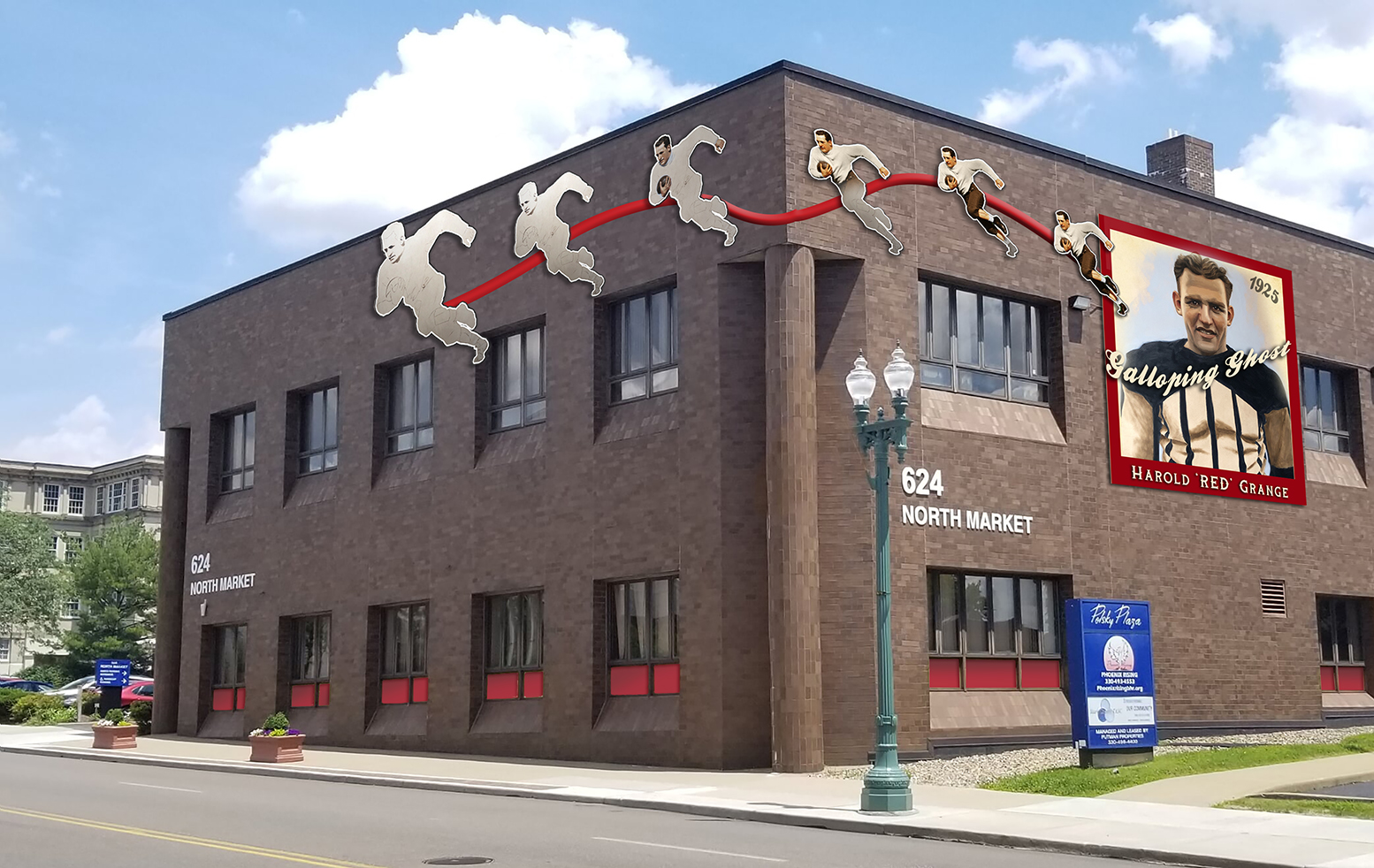 His creation depicts the famous fourth quarter goal line touchdown by former quarterback Bart Starr in the Dec. 31, 1967 National Football League Championship game featuring the Green Bay Packers versus Dallas Cowboys. Famously remembered by fans and journalists as the Ice Bowl, the frigid game, played at Lambeau Field in Green Bay, Wis., is considered one of the greatest in pro football history.

The score gave the Packers the 21-17 win and sent them to Super Bowl II, which, at the time, was referred to as the second AFL-NFL World Championship Game.

The game was dubbed the Ice Bowl because of the brutally cold conditions with temperatures never spiking above 15 degrees below zero, while the wind chill factor made it feel like negative 48. 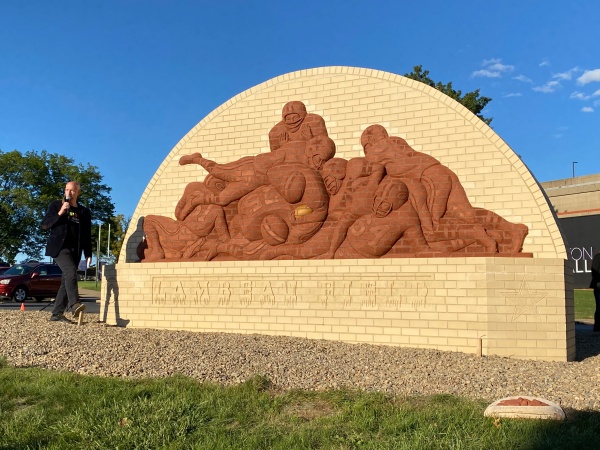 NINTH MOMENT – The Formation of the American Football League (1959) by artist Katherine Stanek was unveiled on September 18, 2020.

The AFL is formed and for ten seasons expands into new markets, creates opportunities, and brings tremendous innovation to the game. 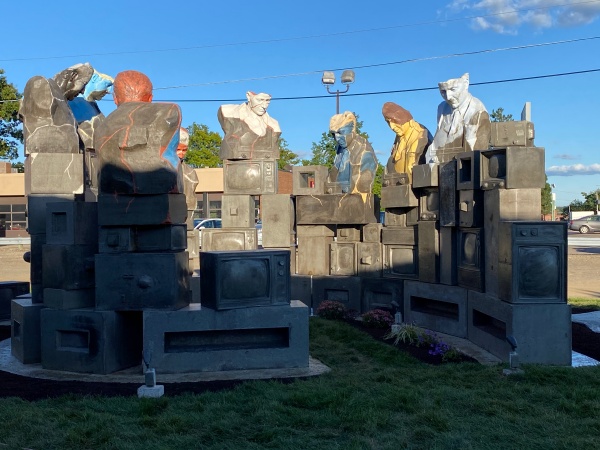