Will Shields came “home” to Canton, Ohio, this past week to spend the day at the Pro Football Hall of Fame.

Shields, a member of the Hall of Fame’s Class of 2015, never missed a game (224) during his 14-season career and collected many accolades.

During a lunch with Hall of Fame staff and volunteers, he explained that besides being enshrined, the award he cherishes was being named the 2003 Walter Payton Man of the Year. This award recognizes an NFL player who is committed to excellence, both on and off the football field.

Every NFL team nominates one finalist who has left a positive impact on his community. The honor is the only league award that recognizes players’ community service activities.

Johnny Unitas won the first NFL Man of the Year award in 1970. Payton, the record-setting Chicago Bears running back, won the award in 1977, and the National Football League named the honor for him after his death in 1999. 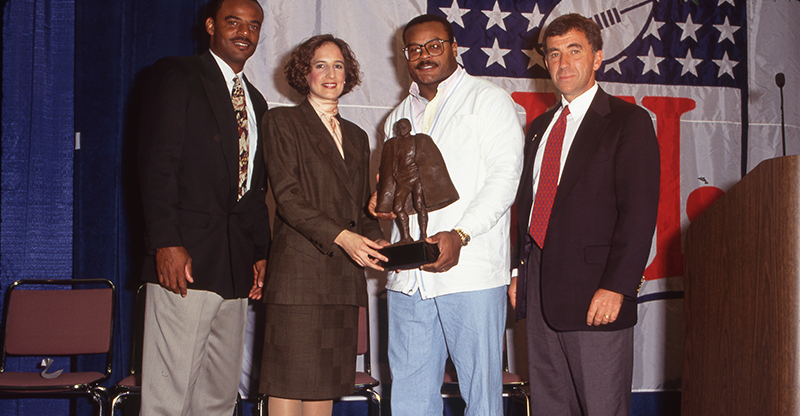 The trophy itself, however, has never changed.

The winner of the Walter Payton NFL Man of the Year Award receives the Gladiator statue. The sculpture was created in 1969 by noted artist Daniel Bennett Schwartz and is modeled after an obscure 6-foot, 6-inch, 250-pound offensive tackle named Steve Wright.

“I’m the poster boy for being in the right place at the right time,” Wright, a retired salesman living in Augusta, Ga., told the New York Times in 2003.

Schwartz said NFL executive David Boss gave him the commission because his familiarity with a Schwartz painting of Jim Brown. That art appeared on the cover of Sports Illustrated along with a series of portraits he did of Baltimore Colts players.

In response to Boss’s commission, Schwartz sculpted what he called “The Gladiator,” a lineman standing with a cape draped across his shoulders.

This past season, 40-year-old offensive tackle Andrew Whitworth of the Los Angeles Rams won the award. 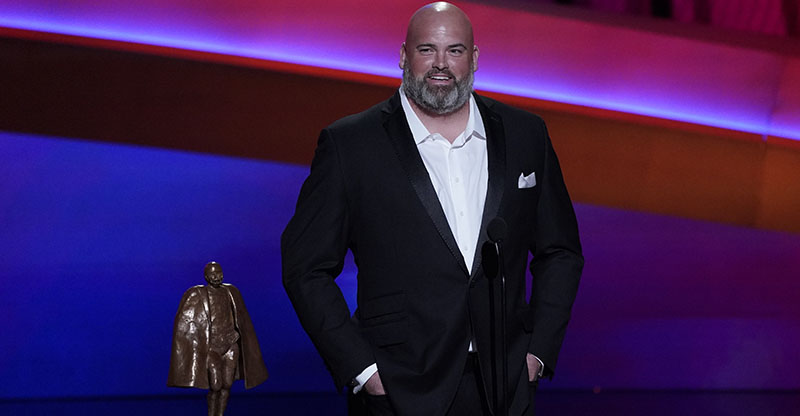 “Since the start of his career, Andrew Whitworth has dedicated himself to making a lasting impact in his communities and his teams,” NFL Commissioner Roger Goodell said. “During his five seasons in Los Angeles, he has dedicated his time and resources to social justice efforts that are working to tackle food insecurity, homelessness and education inequities, including a $160,000 donation just this year as part of his ‘Big Whit For LA Families’ program.

“These are just a few examples of an extensive philanthropic legacy that Andrew has created,” Goodell continued. “He is incredibly deserving of this prestigious award, and we're proud to name him this year’s Walter Payton NFL Man of the Year.”

Each year, the winner of the award receives $250,000 – donated to the charity of his choice – with all other 31 team nominees getting a donation of $40,000 in their names to a charity of choice.

The Pro Football Hall of Fame recognizes the significance of this award for what it is: representative of some of the greatest athletes to step on the field leaving a lasting impact off the field.

You don’t have to be an NFL athlete, or even a Hall of Famer, to give back, though. You just need the drive and passion to make a difference in your community. Awards and accolades are great, but those are secondary to the good that can be done.

Since its inception more than a half-century ago, 28 Hall of Famers who have won the Man of the Year award. That list includes: