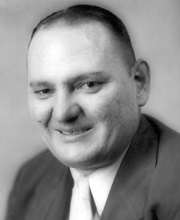 Walt Kieslinq spent 34 years as a player, assistant coach or head coach in the National Football League. A two-way guard who was larger, stronger, and tougher than most of his opponents, he began his storied NFL career as a true “Iron Man” with the Duluth Eskimos.

The Eskimos, led by Hall of Fame fullback Ernie Nevers, played 29 games in 1926 including 28 of them on the road. Linemen seldom make the record books, but “Big Kies,” as he was known, helped put Nevers there when the two played for the Chicago Cardinals.

On November 20, 1929, in a game against the Chicago Bears, Nevers scored six touchdowns and accounted for 40 points. Walt helped pave the way with his classic power blocking. Keisling, who was named to the NFL’s all-league team in 1929, 1930, and 1932, attended little St. Thomas College in his hometown of St. Paul, Minnesota, even though he was recruited by the larger, better-known Notre Dame. As a pro he played in five different cities.

From 1926 through 1938, Kiesling performed for Duluth, Pottsville, both Chicago teams – Cardinals and Bears, Green Bay and Pittsburgh. Although he suffered through more than his fair share of losses, Keisling did play as a member of the 1934 Bears, who went through the regular season undefeated, and the 1936 Packers, who were NFL champions.

In 1939 Keisling got his first head coaching opportunity with the Pittsburgh Pirates, who in 1940 changed their name to Steelers. He also co-coached the merged Pittsburgh-Philadelphia and Pittsburgh-Chicago Cardinals combined teams during World War II. Following the 1944 season, Keisling left the coaching ranks, only to return again in 1954 for another three-year stint with the Steelers. Although the team posted three losing seasons, it earned a reputation for rugged, hard-hitting football – much the same as its coach had earned as a player.

I have the privilege of presenting the late Walt Kiesling who was my friend and my coach in the pro league. Walt Kiesling did not just watch football grow out of those rocky sandlots, he helped plant it and he himself nurtured it. He gave almost a half century to the game he loved; no man ever knew more about his fundamentals. Spurning a Notre Dame scholarship to remain in St. Paul, a town he loved, Big Kies went to little St. Thomas college there in St. Paul oddly enough he went on and played pro football in seven different cities, none of them St. Paul or even close to it. Linemen seldom make the record books, but certainly Big Kies put fellow Hall of Famer, Ernie Nevers in the Hall of Fame. When they were Cardinal teammates Nevers scored 6 touchdowns a gains the Bears behind the overwhelming blocks of Walt Kiesling, this was in November 28, 1929. From 1926 through 1938 Kiesling performed for Duluth, Pottsville, Boston, both Chicago Teams the Cardinals and the Bears, Green Bay, and Pittsburgh. His coaching career began in Pittsburgh in 1939, he coached with other teams including the Packers and he was back with the Steelers again. He finished his football life as a scout and advisor for Art Rooney. With all of it he had the affection and love of all of us and we honor him today and his accepting will be John Blood McNally a lifelong friend of his.

It seems rather strange after all this time to be standing here for Walt Kiesling. I saw that man in 1923 playing baseball, we were both in the same small conference in Minnesota, I was from St. John's he was from St. Thomas. He hit the longest left-handed, of course, Babe Ruth was left-handed too, and so was Babe Kiesling. He hit the longest ball that has ever been hit on St. John I s campus, he was also a basketball player, but beyond his achievement as a football player he was a great friend. He was visible evidence that nice guys finish first. In the long run they do. Now I had the chance, I was offered a job as a coach at Pittsburgh and I thought it over for quite a while. I didn’t know whether I was the material for a coach, perhaps I wasn't, but I knew where to look for an assistant. I went looking around for Walt Kiesling and no matter what the records shows, we did beat the Champions of the National Professional League in 1937, we beat Washington in the last game they lost and we beat the New York Giants in a level match on the Polo Grounds in a game they had to win and we beat Green Bay in a double header. Well, I'm sure that Walt Kiesling had a lot more to do with that than I did. We did our very best and Walt winds up a Champion in my heart, he is a great guy. I'm proud to be here to accept this award.