A new "For Pete's Sake" blog appears each Thursday.

Tonight’s first round means that the season must be just around the corner. Before you know it, we’ll be tuned into NFL Network as they air the New Orleans Saints vs. Arizona Cardinals in our game played in classic Fawcett Stadium across the street from the Hall (Get your tickets). That night, many NFL hopefuls will begin their journey to land a spot on a roster.

But, first we get to enjoy the draft and the great event that it has become for fans. The other day I was doing an interview with a member of the media and they asked if I watch the draft as a fan. The fact is that, in my job, I really don’t. In fact, I probably get less caught up in the pre-draft coverage than most and rarely spend much time studying mock drafts.

I’ve been conditioned to look at football from a historical perspective. So, tomorrow I’ll look BACK at the first round and absorb all of the storylines. I’m always fascinated by the wheeling-and-dealing that takes place and how it potentially changes history.

For instance, had the Dallas Cowboys not worked a trade in 1977 to move up and grab the player they wanted, would Heisman Trophy winner Tony Dorsett had a Hall of Fame career as a Seattle Seahawk? Back in the days of the AFL vs. NFL draft wars, how would football history have changed if Alabama quarterback Joe Namath signed with the St. Louis Cardinals who drafted him in the first round of the NFL draft in 1965 instead of the New York Jets of the rival AFL?

I could go on and on and I imagine much of the talk tomorrow will focus on trades that occur today and tonight as teams strategically plot their futures.

Last year, I shared some tidbits on draft day in my blog. Among them was an interesting nugget I uncovered that went back to the league’s first draft. The owners and league President Joe Carr gathered for the inaugural draft and apparently really enjoyed it. It went so well that they unilaterally agreed on the spot to add four more rounds. Imagine what would happen to the NFL Network and ESPN’s coverage if Roger Goodell shared with them on Saturday that we’re going to throw in a few more rounds of picks because everyone is having so much fun!

If you jump around our website you’d see lots of facts and interesting side notes from past drafts.

I’ve shared many of them with you also through my blog. I’ll end my annual draft day blog by stealing a note from NFL.com’s Gil Brandt who shared this little known fact with us the other day. There has only been one player who has been drafted three times! This intrigued me enough to dig through the files to find out more on this story.

University of Houston fullback/linebacker Donnie Caraway was drafted in three successive years in the 1950s. He was the 7th round pick of the Washington Redskins (83rd overall) in 1956; picked as a future choice in 1957 by the Chicago Bears in the 29th round (348th overall); and one final time in 1958 when he was drafted in the fourth round by the New York Giants (47th overall).

Interestingly, between being drafted by the Bears and Giants, he played one season in Canada with the Calgary Stampeders.

Eligibility rules of the day weren’t as clear as today for sure. Teams often grabbed a player only to find later they really weren’t eligible for the draft. Caraway never suited up in the NFL. Although signed in January 1958 by the Giants, he was among the final cuts the team made prior to the start of the ’58 regular season. He, however, was around the team enough to get a bio in that year’s media guide which also sheds details on how he could have been drafted three times! 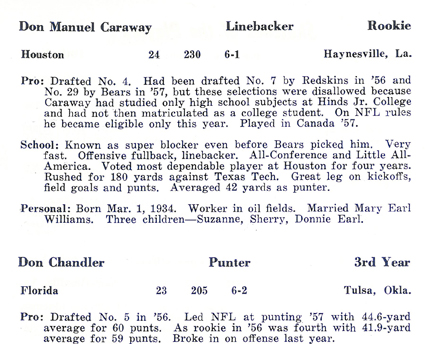 I’m looking forward to some of the “oddball” side stories that will be created during the next three days.

Happy Draft Day(s) to all!