Ace in the hole

A new "For Pete's Sake" blog appears most Thursdays.

Today is Hall of Famer Ace Parker’s 100th birthday. He is the first member of the Pro Football Hall of Fame to reach 100 and just the fourth former NFL player to celebrate this incredible milestone birthday. I would have to say it’s one of the unique aspects of my job to say that I’ve personally met two of the NFL’s four centenarians.

We’ve splashed lots of stories, photos, and some video about this great star of the 1930s and ’40s on our website. But, unfortunately, we aren’t able to add an interview of Ace on his special day. While he still lives in his home thanks to some terrific 24/7 care from two women who are like family to him, he’s not able to carry on much of a conversation.

Fortunately though I had a really great phone conversation yesterday with one of his long-time friends who serves as Ace’s health Power of Attorney. Buddy Lex, who himself was a fine athlete and is a fellow member of the Virginia Sports Hall of Fame along with Ace. He provided me with an update on Ace and also told some great stories about his friend. Buddy, who is 86, told me how Ace was his hero when he was growing up. Later the two would cross paths which led to a great friendship that continues today.

Lex educated me on how Parker’s nickname came about. Apparently, sometime around Parker’s sophomore year at Duke, a sports reporter by the name of Bill Cox wrote that whenever Duke needed five yards, or eight yards, or twelve yards, or whatever they needed; they had an “Ace in the hole” in Clarence Parker. From that day forward, it was “Ace” Parker. Buddy shared other stories like when Ace beat some golfer by the name of Sam Snead in a driving contest during high school; and how Parker hit a home run in his first at bat in the majors.

But, he mostly talked with pride about his great friend. It’s really quite recent that Ace isn’t able to get around very well but Lex reports that Parker still possesses a good grip. He also enjoys going for a car ride every day to get out. It wasn’t until but 10 months ago that Ace was still golfing a few holes with Buddy. Imagine that … we should all be so fortunate to still be hitting a golf ball at 99. Lex even shared how Ace could still putt rather well. And, occasionally he would connect on a nice fairway shot and would instantly turnaround and flash his big smile back at Buddy. 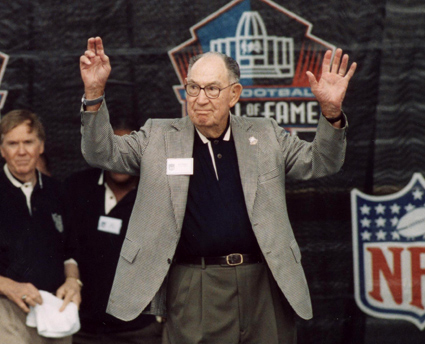 All of us at the Hall of Fame remember that smile fondly. Ace and his wife Thelma, who passed away just two years ago, were regulars every summer when they would return to Canton to participate in the annual Enshrinement Festival.

I imagine Buddy and other friends will see that great big smile this afternoon when they gather to celebrate Ace’s 100th birthday with some cake and balloons.