It Must be the Gloves

Players in the National Football League will use virtually anything possible to gain an advantage on the football field. Most of the time in today’s game, the advantage revolves around speed. Over the years, through innovation, most football equipment has become smaller, lighter and more form-fitting for sake of speed. However, if there is one piece of equipment that almost every former skill-position player wishes were available when they played, it must be the gloves! 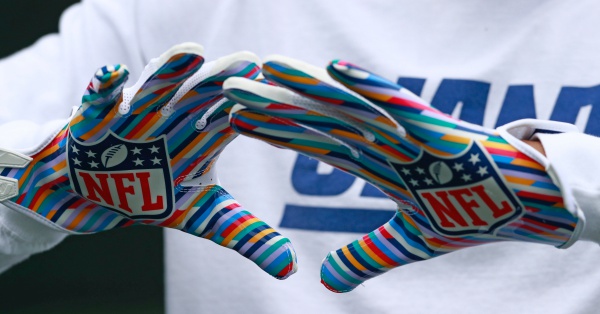 It certainly seems like every reception on Sunday is a one-handed grab. In some situations, all the receiver needs are a finger and a thumb. Is it the gloves? Most fans would say it doesn’t matter and feel the constantly improving gloves are good for the game, making it more entertaining.

Former NFL Legends might be wondering why the league came down so hard on them for an item that saw heavy use in the 1970s and early ’80s called “Stickum.” Sold under the name of Hold-Tite or Firm Grip, the sticky substance had been used by players for many seasons to help with their grip on the football. Part of the reason it was finally outlawed was because some players took use of the substance to extreme levels.

Fred Biletnikoff, the Pro Football Hall of Fame receiver for the Oakland Raiders, was well known for his great hands. He also was remembered for his excessive use of the “Stickum,” as his trademarked look included the substance being smeared all over his socks. This allowed him to easily apply the “Stickum” during games.

There was no guarantee however that the adhesive would help with catching a ball. Biletnikoff’s teammate cornerback Lester Hayes also liberally used the substance. When it was finally banned in March 1981, Hayes took the change in stride while revealing why he liked using so much of the sticky stuff.

“It will have no effect on my game,” commented the All-Pro player. “I still dropped the ball even when I used it. It was more of a psychological thing. The opposing players hated getting Stickum all over them. I loved getting it all over their faces.”

Therein lied one of the main reasons why “Stickum” was forbidden. It was a mess and equipment managers despised trying to remove the adhesive from towels and uniforms. It also gummed up the footballs. A special solvent had to be used to remove the gunk which made the surface of the ball slippery. Therefore, in the 1981 NFL Rule Book, under Rule 5, Section 3, Article 1- Equipment, it stated, “no player shall wear equipment which in the opinion of the officials endangers other players. Types of equipment, materials, or use of substances which are considered to be illegal include the following: (k) Use of adhesive or slippery substances on the body, equipment, or uniform of any player.”

As gloves get shinier and tackier, their use is relatively unregulated by the NFL. Although, the one rule players still must follow is that the gloves leave no residue on the football. And surprisingly, most former receivers see it as a non-issue. Hall of Fame receiver Jerry Rice, with a record 1,549 catches on his résumé, told the San Francisco Chronicle, “The gloves are a little more tacky than they used to be, but a guy still has to be able to make that catch, turn that body and get that hand up.”

Hall of Famer Michael Irvin also credited work ethic over tacky gloves, explaining to the Chronicle, “The gloves are a factor, but you also see those guys practicing this now. We want to think that it’s just the gloves, but this is a skill set. ...These guys today are actually practicing one-handed grabs.”

So, perhaps the advantage receivers seek actually revolves more around practice than the help of their gloves!