Shannon Sharpe is known to have an opinion about everything. Today, he co-hosts a debate show called “Skip and Shannon: Undisputed.” While he has always been outspoken, nothing was ever handed to him.

Sharpe retired as the NFL’s all-time leading tight end in virtually every category imaginable. The 14-year veteran, however, had to travel a long way to overcome the moniker of being “Sterling’s little brother” to eventually earn a bronze bust in Canton. His older brother Sterling Sharpe, three years his senior, cast a large shadow for Shannon as he grew up. Sterling was the star on the local football team and went on to an All-American career at South Carolina followed by an All-Pro career with the Green Bay Packers. 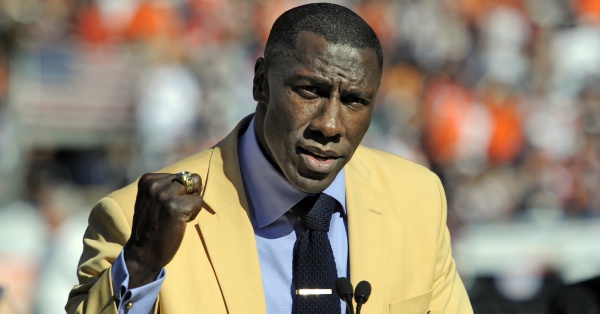 The younger Sharpe was raised in Glennville, Ga., where he attended high school. There he starred as Glennville High School’s running back, quarterback and linebacker. Sharpe followed in his brother’s footsteps and was selected as all-county, all-region and all-area in football. In addition to lettering in football four times, he earned three letters in basketball and four in track. He broke the Georgia Class A mark in the triple jump (48 feet, 3 inches) as a junior and broke his own mark as a senior (49-5).

Sharpe decided to stay in-state to play college football and signed with the Division II Savannah State Tigers. Sharpe’s collegiate career could be summed up by simply using the word “tremendous” ... times three. He was selected three times as an All-American, three times as the All-Southern Intercollegiate Athletic Conference and was a three-time choice as the conference’s offensive player of the year. All while leading the team in receptions in each of his four years on the Savannah State campus.

The impact of Sharpe’s great play was paramount to the success of Savannah State’s program. The flanker led the 1988 and 1989 Tigers to a combined 15-4 record including an all-time best 8-1 record in ’89. As a senior, he caught 61 passes for 1,312 yards and 18 TDs. He had three games with 200 or more yards and one game with four touchdowns. Sharpe finished his four-year career with 192 receptions for 3,744 yards and 40 TDs. In his final two games, Sharpe became the first Savannah State football player to play in the Blue-Gray Classic (1990) and the East-West Shrine Game (1990).

Moving on to the NFL seemed like a natural progression for Sharpe, but most teams were of the opinion that the chiseled 6-2, 230-pounder was too two slow for wide receiver and too small for tight end. The Denver Broncos eventually took him in the seventh round of the 1990 NFL Draft with the intentions of playing him at wide receiver.

For the first two years he saw limited action and pulled in only 29 receptions for 421 yards and two TDs. The Broncos moved him to tight end in his third season and he led the Broncos in receiving with 53 catches for 640 yards to earn his first of eight Pro Bowl nods. By 1993, he had joined his older brother Sterling as an All-Pro selection.

The younger Sharpe would soon blaze his own trail as he would go on to lead the Broncos in receiving six times and the Baltimore Ravens once. He was named first team All-Pro and All-AFC in 1993, 1996, 1997 and 1998 and was selected to the NFL’s All-Decade Team of the 1990s.

Sharpe was elected to the Pro Football Hall of Fame in 2011. He is one of nine Hall of Famers drafted in the seventh round. His commitment to the game made him great and his passion helped raise the level of everyone around him. Every player’s path to the NFL is different and all that matters is what you do with the opportunity once you get there.