The Pro Football Hall of Fame is a home to preserve the legacy of every former NFL player, coach and administrator. The information and artifacts cared for at the world-class museum provides researchers the ability to learn about and share stories of great value with future generations. Every person who has helped build professional football to what it is today has a unique story to tell. The Pro Football Hall of Fame’s Ralph Wilson, Jr. Pro Football Research and Preservation Center staff works tirelessly to search out, develop and disseminate inspiring stories of commitment, courage, perseverance and excellence. 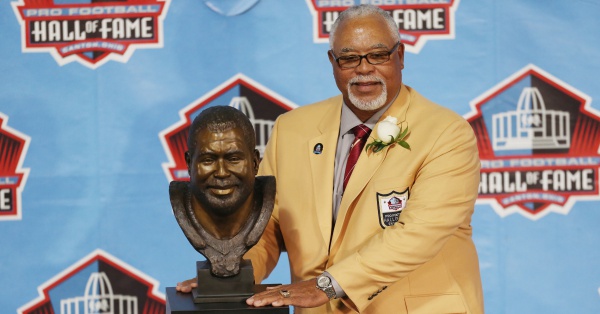 For example, Hall of Fame defensive tackle Curley Culp was one of the strongest and most athletic defensive lineman in NFL history. Little do people know that he honed that legendary strength by tossing 50-pound barrels, day after day, on his father’s farm while growing up in Yuma, Ariz. Culp’s long-developed power translated well in two of the sports he loved — football and wrestling.

Culp was a two-way player on the gridiron where he played as a fullback and lineman at Yuma High School. On the mat he won back-to-back state heavyweight titles in 1963 and ’64.

Although he was heavily recruited by a number of colleges, Culp chose nearby Arizona State because head football coach Frank Kush agreed to allow Culp wrestle. The school benefited on both fronts.

Culp, who had a tremendously low center of gravity, was one of the most dominant wrestlers in the nation during his collegiate career. He was a three-time Western Athletic Conference champion, the 1967 NCAA heavyweight wresting champion, and was undefeated during his final two seasons. Not surprisingly, his efforts as a grappler earned him an invitation to try out for the 1968 U.S. Olympic Team.

As a football player, Culp was an ominous, overpowering figure. The middle guard stood 6-1, weighed up 275 pounds, and had an 18½-inch neck with biceps to match. That muscle combined with 4.6-second speed in the 40-yard dash made the opponents quiver.

“Culp is the greatest collegiate lineman I’ve ever seen or been associated with,” legendary Oklahoma coach Bud Wilkinson once said.

Another college opponent once said, “Culp hit me, and I didn’t know if I’d ever get up again.”

After two solid years at Arizona State, Culp flourished as a senior and was named to the Associated Press, Time and Sporting News All-America teams. Spots on the Coaches’ All-American Game and the Chicago All-Star Game capped off his college career.

He was soon drafted by the Denver Broncos in the second round of the 1968 draft. After serious thought, he decided to forego a wrestling career and stick with football. The Broncos however, had plans to play Culp at offensive guard.

“I told them at the time it wasn’t my feel,” Culp later said. “I didn’t play it in college and didn’t feel comfortable with it.”

Unable to work things out, the Broncos traded Culp to Kansas City. The Chiefs inserted him at defensive tackle and his career skyrocketed. In his second pro season, he helped the Chiefs win Super Bowl IV. Then after a mid-career trade to the Houston Oilers, he would revolutionize the nose tackle position in the NFL.

Culp’s Personal Legacy Archive created and maintained by the Hall’s archives staff is filled with letters, documents, photographs, newspaper clippings and artifacts related not just to his football career, but his life. Sifting through this detailed information lets someone not only know what he accomplished on the field of play, but understand who Curley Culp stands for as an individual.