Jack Butler Patiently Persevered to Become a Hall of Famer

Jack Butler never spent much time dwelling about his legacy or whether he was Hall of Fame material. Despite playing at a consistently high level throughout his nine-year NFL career with the Pittsburgh Steelers, Butler’s excellence always seemed to be misinterpreted by those who were watching. 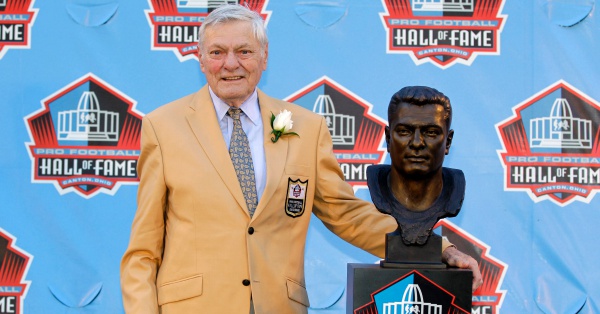 His first Pro Bowl nod didn’t come until his fifth season. He didn’t earn All-NFL acclaim until later in his career when he was selected first-team All-Pro in each of his final three pro seasons.

Butler left the game after the 1959 season as the game’s second all-time leading interceptor and one of the most dominant cornerbacks in league history. Yet, he had to wait a half century to earn election to the Pro Football Hall of Fame.

This wasn’t the first time in Butler’s life he had to exercise patience. The start to his NFL career also included a long wait. Each of the 14 NFL clubs had 30 picks in the 1951 NFL Draft held over two days in mid-January that year. A total of 362 college players were chosen and none of them were Jack Butler.

He actually never played football for his high school. The native Pittsburgher had visions of becoming a Catholic priest and followed his brother to a seminary in Niagara Falls, Ontario. Butler soon changed courses and enrolled at tiny St. Bonaventure in Olean, N.Y. It was there that the school’s athletic director recalled Butler from sandlot days back in Pittsburgh and convinced him to join the university’s football team.

That connection proved far greater than him being drafted. St. Bonaventure’s AD was Father Silas (Dan) Rooney, the brother of Steelers founder and owner Art Rooney. It also helped that Butler’s college coach was Joe Bach, who had coached with the Steelers in the mid-1930s.

Pittsburgh wisely signed Butler to a contract. The young “sleeper” had some difficulty showcasing his talents early in his career. He was utilized as a two-way performer in college and was quite effective at catching the football. Unfortunately, the Steelers were run-oriented at the time and seldom used Butler as a receiving threat. On defense, he was placed on the front line despite his relative lack of size. The patience Butler learned from his days at the seminary eventually paid dividends.

The Steelers were on the verge of cutting ties with Butler at the end of camp before they heeded the advice of Bach.

“Just give him a chance to find his way around,” shared the coach.

When injuries forced the Steelers to shuffle their secondary, Jim Finks moved from cornerback to safety and Butler was inserted in the defensive backfield at right cornerback where he illustrated his unique knack as a ballhawk which paired nicely with his tenacious tackling ability.

Butler then reunited with Bach when the Steelers hired him for a second stint as the team’s head coach after St. Bonaventure dropped its football program. Butler continue to thrive until a horrible leg injury ended his decade-long playing career.

Butler had only intended on playing a few years of pro football, so when the injury forced him to retire, he took it as an opportunity to grow. He spent his post-playing career as a long-time and well-respected scout. He became the Director of the BLESTO scouting combine and his analysis allowed thousands of players to get their NFL starts through the draft.

Ironically, he is one of just 17 Hall of Fame players to enter the NFL as an undrafted free agent.