As the 2019 NFL season approaches its midway point, the contenders for the 2020 Super Bowl are starting to reveal themselves.

While numerous teams have shuffled in and out of the Power Rankings through the first seven weeks of the season, this is the first time that four teams have held onto the top four spots for consecutive weeks.

But while four familiar faces top the rankings, a new team has made their way into the last spot for the first time this year.

Here are your official Power Rankings for Week 8 of the 2019 NFL season. 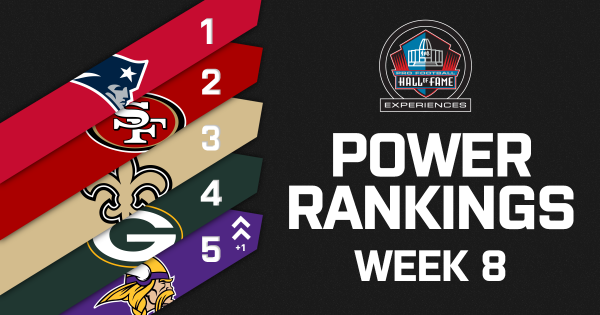 Sam Darnold was “seeing ghosts” on Monday night, but in reality it was just the terrifying Patriots defensive unit that was in front of him.

The New England defense forced six turnovers (four interceptions, one fumble and one safety) in the Patriots 33-0 victory over the New York Jets, continuing to prove their status as the league’s best defense.

The Patriots are taking the ball away from opponents at a record-setting pace — their 18 interceptions are the most through seven games since the Green Bay Packers had 20 at the same mark in 1996. For those who love tidbits of history, the Packers met the Patriots in the Super Bowl that same year.

But if you thought the Patriots were content with a blowout victory and excellent defensive outing, you’d be wrong. On Tuesday morning, they traded a 2020 second round draft pick in exchange for Atlanta Falcons wide receiver Mohamed Sanu.

The Patriots are on a collision course to the 2020 Super Bowl and it will take another legitimate contender in the AFC to stop them.

It was muddy and it was ugly — and the 49ers are still perfect.

A 9-0 victory doesn’t instill a ton of confidence for a team, but San Francisco head coach Kyle Shanahan was pleased his team escaped the nation’s capital with a win.

The conditions at FedEx Field were worse than sloppy, as the 49ers and Redskins combined for 65 total rushing attempts in the NFL’s shortest game in 10 years.

There’s not much to take from the win for San Francisco outside of survival. While they are the stronger side when compared to Washington, everything is thrown out the window when field conditions are as poor as they were on Sunday.

After five weeks, the question needs to be asked: How good will the Saints be when Drew Brees returns?

While it seemed like the sky was falling once Brees was ruled out with a thumb injury, it has been nothing but 70-and-sunny on Bourbon Street with Teddy Bridgewater behind center.

Bridgewater continued his tremendous run on Sunday, throwing for 281 yards and two touchdowns in the Saints’ 36-25 win over Chicago. New Orleans is 5-0 since Bridgewater took over as the starter after Brees’ injury.

But Brees wasn’t the only one absent on Sunday. The Saints won their fifth consecutive game without star running back Alvin Kamara or tight end Jared Cook on the field.

The Saints are currently in one of the best positions in the NFC — their injury bug bit early, but it hasn’t halted any of their momentum. If anything, they’ll only get better as the season progresses and their star performers return to the field.

When Aaron Rodgers is on, there’s not a defense in the league that can stop him.

The 2-Time NFL MVP put on one of the best performances of his career in Week 7, throwing for 429 yards and five touchdowns in the Packers’ 42-24 win over Oakland while also earning the first perfect passer rating of his career. Oh yeah, he also rushed for a touchdown, accounting for six of Green Bay’s seven scores.

Things are clicking just at the right time for Rodgers and head coach Matt LaFleur as the NFC North starts to see some separation. There’s still a lot of football left, but it looks like it’ll be a battle between Green Bay and Minnesota to see who comes out of the division.

Three weeks ago, nobody would have believed you if you said Kirk Cousins would work his way into the MVP race.

But after weeks of ridicule, poor performances and rumors of an unhappy Stefon Diggs, Cousins is finally playing up to his $80 million contract.

The Vikings have won three consecutive games and Cousins is playing the best ball of his career, most recently going for four touchdowns and a season-high 337 passing yards in their Week 7 win over the Detroit Lions.

And then there’s Dalvin Cook, who is putting his name into the conversation as one of the best running backs in the league. Cook went off against the Lions, rushing for 142 yards and two scores in the win.

The NFC North may be turning into a two-horse race and we’re all here for the fireworks.

Want to be at Hard Rock Stadium for the 2020 Super Bowl? Secure a 2020 Super Bowl Ticket Package from HOF Experiences and get a game ticket, access to Gold Jacket Club hospitality, the Gold Jacket Autograph Session and much more.