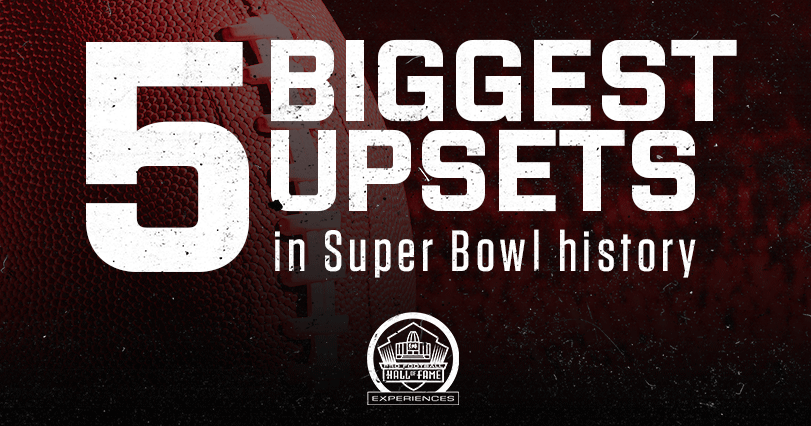 The Super Bowl signifies the colossal annual meeting between the best that the AFC and NFC have to offer.

But every couple of years, the matchup heading into the Super Bowl seems to be lopsided, with one side coming in as the heavy favorite.

The favoritism may be justified, as the stronger team often keeps their momentum rolling through the Super Bowl and all the way to the Lombardi Trophy.

But every so often this uneven scale opens the door for a historic upset. It is one single 60-minute contest to determine the world champion, with no room for error.

And with that comes some memorable upsets over the game’s 50-plus-year history.

In anticipation of the 2022 Super Bowl heading to Inglewood, California in February, we’re breaking down the five biggest upsets to take place on the NFL’s biggest stage.

A 12-4 regular season record makes it hard in hindsight to see the Denver Broncos as much of an underdog team, but John Elway and company came into the 1998 Super Bowl with the chance to be the second-ever Wild Card team to win a championship.

Green Bay entered the game as the defending Super Bowl Champions and with a 13-3 regular season record, stacking the odds high in favor of Brett Favre’s side. Vegas had the Packers as a double-digit favorite going into the game, making it only more surprising for a close matchup to take place and for the Broncos to edge out the victory thanks to an MVP performance from running back Terrell Davis.

Davis ran for 157 yards and a Super Bowl record three rushing touchdowns, including the game-winning touchdown with under two minutes left, to help win Denver the title and make the Packers the first double-digit favorite to lose since the 1970 Super Bowl.

This game is remembered for several reasons – the start to a miserable four-year Super Bowl run for the Bills, the wide-right kick as time expired and one of the closest championship games ever.

But what is often forgotten is how unlikely it was that the Giants left Florida with the Lombardi Trophy.

Buffalo entered the game with a 13-3 record and the league’s best offense, scoring a whopping 428 points throughout the regular season and coming off a 51-3 shellacking of the Raiders in the AFC Championship Game.

The Giants possessed the league’s best defense, led by Lawrence Taylor, but many thought that Jim Kelly and Buffalo’s offense possessed the right recipe to get past the Giants’ lauded front.

New York was also led by their backup quarterback Jeff Hostetler, who took the reins after Phil Simms’ season ended with a broken foot.

With a backup quarterback in charge, the Giants went back and forth with their explosive counterparts, ending in a missed 47-yard field goal as time expired to earn New York a stunning Super Bowl win.

Before the Patriots dynasty was the most feared entity in football, there was “The Greatest Show on Turf,” a moniker for the famed Rams offense that included Kurt Warner, Isaac Bruce, Torry Holt and Marshall Faulk.

The Patriots defense shockingly stifled the Rams prolific offensive unit throughout the game and the ball was put in the young, unproven hands of Tom Brady to go win the game with under two minutes remaining.

Brady drove the Patriots down the field to set up a 48-yard Adam Vinatieri field goal that went through the uprights as time expired.

What started as a true underdog win become the birth of the sport’s most prolific and tenured dynasty.

It’s one thing to think your team can upset your opponent, but it’s another to guarantee it.

“Broadway” Joe Namath’s legacy was cemented by the simple public guarantee that he gave that his New York Jets would defeat the Baltimore Colts in the 1969 Super Bowl. The Colts came into the game as a heavy favorite and the moxie of Namath in the pregame papers took many by surprise.

But the dynamic quarterback backed his talk up, putting on an MVP performance and leading the Jets to their only Super Bowl victory in franchise history.

Going into the 2008 Super Bowl, the New England Patriots were on the precipice of history.

After a 16-0 regular season, New England won its first two playoff games to make it to 18-0, one win away from becoming the first 19-0 Super Bowl champion in NFL history.

The last roadblock in their way was the New York Giants, who came into the playoffs as a 10-6 Wild Card team. After three consecutive road playoff wins, Eli Manning and the Giants got their date with New England in the Super Bowl.

The game doesn’t need much recap. There’s the David Tyree catch, which has been immortalized as the most memorable plays in Super Bowl history. There’s also the image just seconds before of Eli Manning escaping the grasp of several Patriots defenders as he lunges for free space to be able to get the ball out.

The game tells a history of its own, but it wouldn’t be as significant if it didn’t end up as the ultimate David vs. Goliath tale, with the Giants proving the tale to be true in front of a global audience.

The Super Bowl is the most unpredictable game of the NFL season, and the 2022 Super Bowl will be no different. Join HOF Experiences at SoFi Stadium this February with a 2022 Super Bowl Ticket Package. Get a game ticket, access to the Gold Jacket Club pregame party, exclusive extras and much more.