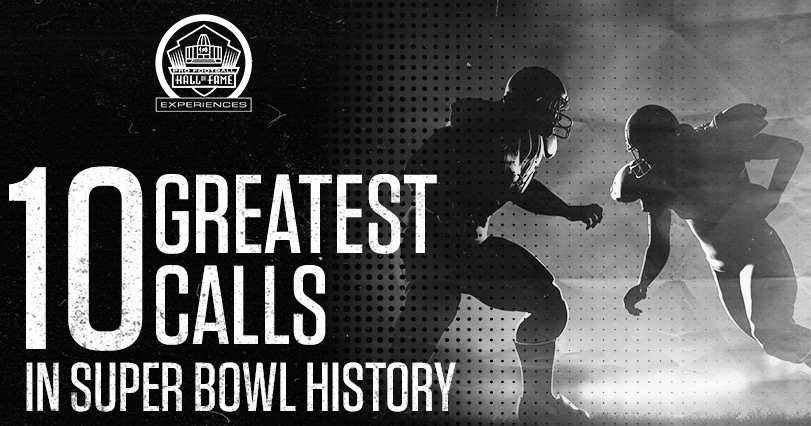 When a Super Bowl is at stake, coaches are forced to make quick decisions with every play call or risk losing on the game’s biggest stage.

Whether it’s a defensive strategy, a single trick play or a game-altering decision, the Super Bowl is full of dramatic decisions and calls that either work or fail.

Below we’ll count down the best calls and decisions that have altered history and created a path to glory for 10 different Super Bowl winners.

The first entrant on this list is the one with the least, if any, stakes.

In the third quarter of the 1986 Super Bowl, the Bears held a strangling 37-3 lead over the Patriots. With a Super Bowl title just a quarter and change away, Chicago decided to create one of the Super Bowl’s most memorable moments during a blowout.

With the ball on New England’s 1-yard line, the Bears ran 350-plus pound defensive lineman William “The Refrigerator” Perry up the middle for the score.

It wasn’t a risky play call given the score, but nonetheless was one etched into the history books.

With nine minutes left in the fourth quarter, the Steelers led the Seahawks, 14-10, with the ball on the opponent’s 43-yard line.

On first down, Ben Roethlisberger pitched the ball to running back Willie Parker, who then handed it off to a sweeping Antwan Randle El coming across the backfield. Randle El then launched the ball down the right sideline to Hines Ward, who just got past the Seattle safety to corral the pass and enter the endzone.

The third quarter of the 1982 Super Bowl saw one of the greatest defensive stands in NFL history.

Trailing 20-7, the Bengals offense charged down the first for a first-and-goal from San Francisco’s 3-yard line.

San Francisco head coach Bill Walsh then orchestrated a legendary set of defensive play calls, as the Niners stuffed the Bengals on four consecutive plays, leaving them just inches from the end zone.

7. DECIDED BY A YARD

With the ball on the 10-yard line and six seconds left the Titans had one final shot to save their Super Bowl chances.

While some coaches may opt to blitz to pressure the quarterback, the Rams sent just four down lineman and pushed their seven remaining defenders back.

By not letting a single Titans receiver get behind them, the Rams forced quarterback Steve McNair to slot the ball to Kevin Dyson, who was still five yards from the paydirt.

The rest is history, as Dyson was tackled one yard shy from scoring the game-tying touchdown.

With the Giants trailing the Broncos, 10-9, early in the third quarter of the 1987 Super Bowl, New York head coach Bill Parcells took a monumental gamble.

New York received the opening kickoff of the half and went a quick three-and-out, but Parcells saw an opportunity in front of him. He sent backup quarterback Jeff Rutledge in with the special teams unit and if the Broncos didn’t notice, the Giants would operate a fake.

It worked, as Rutledge audibled under center and ran a quarterback sneak for the first down. The Giants went on to score 30 points in the second half, blowing out the Broncos in the process.

With the Dolphins leading 17-13 with 10 minutes left in the fourth quarter, the Redskins needed to make a championship-winning play.

With a fourth-and-one from the Dolphins 42-yard line, Washington head coach Joe Gibbs opted to go for it.

The decision resulted in immediate satisfaction as Redskins running back John Riggins busted through the hole and took the ball 42 yards to the endzone for the eventual game-winning touchdown.

4. THE BUTLER DID IT

The greatest interception in Super Bowl history was drawn up the week prior.

With second-and-goal from the one-yard line, the Seahawks had three plays to erase their four-point deficit to the Patriots.

Seattle lined two receivers close on the right side of the field, signaling to the Patriots that a pick play was coming.

Cornerback Malcolm Butler, having practiced the exact play with the Patriots scouting team, read the pick and jumped in front of wide receiver Tyler Lockett to intercept the ball at the goal line.

As far as defensive play calling goes, it cannot get more perfect than this Super Bowl-winning turnover.

3. NO TIME FOR OVERTIME

The Patriots dynasty was built off a single call that Bill Belichick made in the 2002 Super Bowl.

With the score tied 17-17, New England received the ball off a kickoff with 1:30 left and no timeouts remaining.

While announcer John Madden was calling for the Patriots to play for overtime, Belichick decided to trust his newly minted starter Tom Brady to drive the team down the field.

A couple of plays later and the Patriots set up Adam Vinatieri for the game-winning 48-yard field goal.

One simple call to go for the win ended up affecting the next two decades in the NFL.

It was a play so good it became worthy of a statue.

With 38 seconds left in the first half, the Eagles led the Patriots 15-12 and had a fourth-and-goal inside of the two-yard line.

Peterson confirmed the call and Foles ran to the huddle to lock in the “Philly Special”.

Foles lined up in the shotgun and feigned going behind the right tackle for an audible. Then the ball snapped to Corey Clement, who tossed it to a crossing Trey Burton. The wide receiver then found Foles, who had drifted out of the defense’s sight and into the right corner of the endzone.

While the play didn’t decide the game, it gave the Eagles a two-score cushion that would propel them to victory in the second half.

The Saints went into halftime of the 2010 Super Bowl trailing 10-6 and ready to kick off to the Colts to start the second half.

But Super Bowl wins, especially the first in a franchise’s history, require a bit of risk.

Knowing his team needed a spark to start the second half, Saints coach Sean Payton called for an onside kick to start the third quarter.

The onside kick was successful as the Saints recovered the ball after it bounced off the facemask of Colts receiver Hank Baskett. The play was the first onside kick attempt outside of the fourth quarter in NFL history.

The Saints would march down the field quickly following the surprise special teams play, scoring a touchdown to take their first lead of the game.

JOIN HALL OF FAME EXPERIENCES AT THE 2022 SUPER BOWL

Be there when the next piece of Super Bowl history is written in 2022.