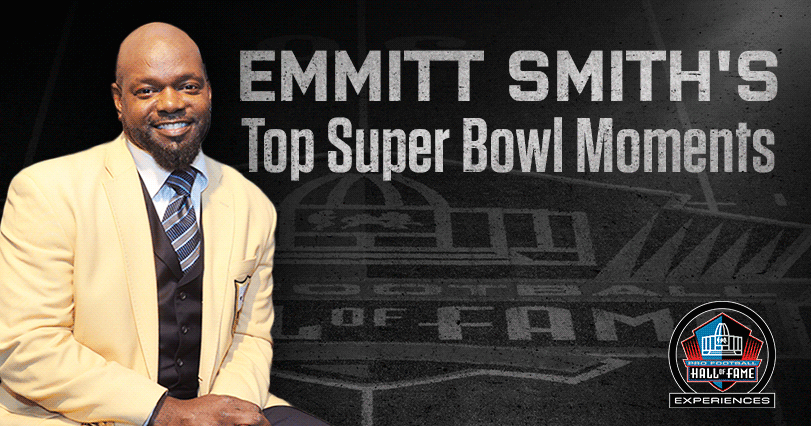 Emmitt Smith is headed back to the Super Bowl in 2022.

The Hall of Fame running back and Dallas Cowboys legend will take the stage as host of Hall of Fame Experiences’ Gold Jacket Club pre-game hospitality party at Hollywood Park Casino.

Smith is no stranger to Super Bowl memories and moments, having won the Lombardi Trophy three times during his career.

In anticipation of Smith’s return to the biggest game of the NFL season, we’re looking back at his title-winning performances that helped cement his legacy.

By the 1993 Super Bowl, Emmitt Smith was already known as the best running back in the league, but was still missing the top prize in the sport to go with his high praise. Smith entered the 1993 title game off the back of a second consecutive season as the league’s top rusher and his momentum carried into the Super Bowl. Against a feared Bills defense, Smith applied pressure in the run game, rushing for 108 total yards on 22 carries to help propel the Cowboys to a blowout victory.

Smith also aided Troy Aikman in the air, catching six passes out of the backfield for 27 yards. His crowning moment came when the game was already decided, as Smith dashed for a 10-yard score, his only touchdown of the game, to bring the score to 52-17.

Smith’s greatest Super Bowl performance came in the following season, as he helped the Cowboys win back-to-back titles in a season to remember. This title game was another blowout against the same opponent, but Smith’s contributions were even greater the second time around. The future Hall of Famer rushed for 132 yards and two scores on 30 carries, proving to be a puzzle that the Bills’ front seven couldn’t solve.

In 1996, Smith joined exclusive company as a one of the few modern players to win three Super Bowl rings. His performance in his third Super Bowl appearance was the lightest in the stat book, but Smith did what he needed to help extend the Cowboys’ dynasty. In the third quarter, Smith busted through the Pittsburgh defense at the goal line to extend the Cowboys lead to 20-7, nearly locking in a third title in four seasons.

Smith finished the game with 49 yards on 18 carries, showcasing the struggle of Dallas’ closest Super Bowl competition of their storied run.

Be there for Smith’s return to Super Bowl weekend with a 2022 Super Bowl Ticket Package from HOF Experiences. Packages include a game ticket, access to the Gold Jacket Club, Hall of Famer appearances and much more.