Rebounding from the flu during the previous week, a somewhat sluggish and weak Walter Payton took the field with his Chicago Bears on November 20, 1977. While he wasn''t sure if he would be able to shake off the lingering effects of the flu, it didn''t take long for him dance his way through and around the Minnesota Vikings defense. 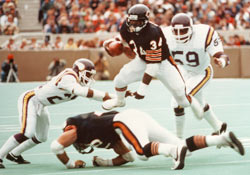 In the first half alone, he carried the ball 26 times for 144 yards and scored one touchdown. The Bears built a 10-0 halftime lead and hung on for a 10-7 victory over their NFC Central Division rivals.

But, that wasn''t the story on this day. A Soldier Field crowd of 57,359 could feel that history was being made. With just a bit more than three minutes to play in the game, Payton broke loose for a 58-yard run to the Vikings'' 9-yard line. Not only did he put the Bears in scoring position but also put him within five yards of O.J. Simpson''s single-game rushing record of 273 yards. Payton carried the ball two more times and gained seven yards to claim the record.

SOME OF PAYTON''S NUMEROUS NFL RECORDS