Charged with the vital task of continuing to be sure that new enshrinees are the finest the game has produced is the Pro Football Hall of Fame's 46-person Selection Committee (see list below).

FAQ about the Hall's selection process

The Committee consists of one media representative from each pro football city with two from New York, inasmuch as that city has two teams in the National Football League. A 33rd member is a representative of the Pro Football Writers of America and there are 13 at-large delegates. 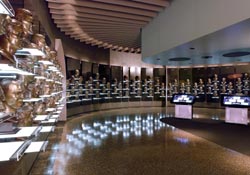 With the exception of the PFWA representative who is appointed for a two-year term, all appointments are of the open-end variety and can be terminated only by retirement or resignation, as long as the member continues to attend meetings regularly.

The Selection Committee meets annually at the time of the Super Bowl to elect new members. There is no set number for any class of enshrinees but, the Committee's current ground rules do stipulate that between four and eight new members will be selected each year. The 1973 and 1976 classes of three were the smallest ever named.

Every candidate is carefully scrutinized and must receive at least 80 percent approval of the Committee at the annual meeting before he can be elected. A scale of negative votes for elimination that will vary depending on the number of Selectors in attendance is used.

When the Selectors meet in February to name the Class of 2016, they will have before them a roster of 18 final candidates, along with detailed biographies on each. To assure that older players will be considered along with the younger breed, the Seniors Committee - made up of nine veteran members of the overall Selection Committee - have named one nominee from the pre-1990 era to be included on the final list.

A bylaws change to the selection process was approved by the Pro Football Hall of Fame’s Board of Trustees in August 2014 by which a Contributor – defined as an individual who has “made outstanding contributions to professional football in capacities other than playing or coaching” – will automatically be included among the annual list of finalists for election. The Contributor finalist will also be voted on for election independent of all other finalists.

To keep the maximum number of nominees elected at no more than eight per year, the Senior finalists will be reduced from two to one per year in years one, three and five of the same five-year period. In years two and four and each year thereafter, there will be two Senior finalists, as is now the practice.

The Contributor finalists will be selected annually, by five members, on a rotational basis, of a nine-member subcommittee of the Selection Committee.

The other finalists will be the survivors from a preliminary list of candidates that the Committee will have screened by mail ballot. That original list will have been in part provided by the fans themselves.

Any fan may nominate any qualified person who has been connected with pro football in any capacity simply by writing to the Pro Football Hall of Fame. The only restriction is that a player and coach must have last played or coached at least five seasons before he can be considered. For example, a candidate for the 2016 class must have concluded his career not later than the 2010 season.

There is no mandatory retirement period for a contributor.  Every nomination received will be processed and forwarded to the Selection Committee.

It is important to emphasize that the Hall of Fame itself has no say whatsoever as to who is or is not elected to membership. The only function of the staff is to process the nominations as they arrive and to coordinate the annual meeting.