(Note: Hall of Fame coach Don Shula faced Hank Stram twice in regular season and once in the playoffs.  It was the 1971 AFC playoff game that is most memorable as the Miami Dolphins defeated the Kansas Chiefs in double-overtime, which is still the longest game ever played in the history of the National Football League.  Hank and Don will again be part of history on August 3rd when Stram is enshrined into the Pro Football Hall of Fame.  The two coaches will be among the approximate 120 living members of the Hall of Fame returning to Canton as part of NFL Homecoming.)

It was always exciting coaching against a Hank Stram team because you brought so much to the game.  Hank, you had a flair about you, and your teams were that way also. 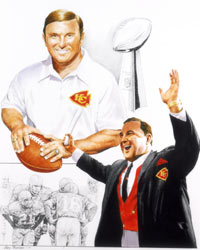 You were the innovator of the stack defense.  And, offensively your teams always did so much movement.  It took a lot of coaching on our part to get our defense ready to play against a Hank Stram offense.

The one thing I remember about coaching against you, Hank, is the longest game on Christmas Day in 1971.  It was the last game in the old stadium in Kansas City.

Then, the following season, we played against you in the first game in the new stadium.  What was unique about that game is it was the hottest game in which I ever coached.  The temperature hovered around 100 degrees.  I used to put my gameplan, the short list, in my shirt pocket.  And the ink from the gameplan just melted and ran all over my shirt.  It got to where I couldn’t read it.  And I recall looking across the field to your sideline and there you were - the only guy who wasn’t in an air-conditioned box and you had on a red vest and coat!

Getting back to the Christmas Day game, that was just a great football game.  There was just so much offense.  And Ed Podolak had such a great contribution (350 total yards) - he did so much.   We hadn’t anticipated him being that big of a factor in the ball game.  We certainly had a lot of respect for him but then when the game was over, you look back and you say, “wow, what a performance by an individual.”

Well Hank, I always knew that when I coached against a Hank Stram Kansas City football team, it was going to be a battle.  And each time the Dolphins and I faced you, a battle it was.

I’m just very happy that you are getting the recognition that you are certainly due.  You brought so much to the game and were one of the great teaching coaches.  You’ve always had a special flair about you.  And now that flair is being recognized.