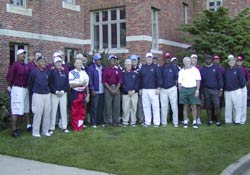 The Pro Football Hall of Fame's annual Golf Classic was a success once again.  The tournament took place yesterday (Sept. 16) at the beautiful Glenmoor Country Club, a Jack Nicklaus designed course, in Canton.

The golfers enjoyed clear, blue skies and temperatures in the mid 70s on Tuesday.  As in the past, the format was a six-man scramble with a Hall of Famer serving as captain for his team.

The team headed by Raiders linebacker Ted Hendricks won the tournament with a score of -17.

The Pro Football Hall of Fame Golf Classic tournament serves as a major fundraiser each year for the Hall, a non-profit museum.