A delighted group of students from various high schools in northeast Ohio enjoyed the many words of wisdom from Hall of Famer Bobby Mitchell on Friday morning. While the on-the-field exploits of the Hall of Fame halfback/receiver are well documented, those in attendance on Friday were treated to an in-depth understanding of Bobby Mitchell, the person. 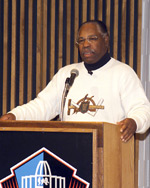 Mitchell, a member of the Hall of Fame's Class of 1983, served as the keynote speaker for African-American Pioneers in Pro Football, presented as a part of the Hall's Educational Outreach Program. Students were admitted free of charge to the two morning sessions. Many visitors to the museum on Friday also attended the sessions as the public was welcomed with the price of admission.

Mitchell, who starred for the Cleveland Browns as a halfback, was traded in 1962 to the Washington Redskins, the NFL's last all white team.

"In 1962, I was just trying to feed my wife and kids," stated Mitchell. At his own admission Mitchell knew very little about the pro game and therefore was actually somewhat unaware of the racial barriers that existed.

The program began with an introduction by Jerry Csaki, the Hall's educational programs coordinator who outlined the history of African-Americans in professional football. He was followed by Vice President of Communications/Exhibits Joe Horrigan who recounted the historical perspective of the color barrier in pro football that was permanently broken in 1946.

"It wasn't the end of a barrier but the start of a correction," noted Horrigan. He spoke about how the racial inequality in pro football was a microcosm of society. Horrigan explained how so many of the early football pioneers such as Hall of Famers Marion Motley, Bill Willis and Mitchell had to endure many tribulations for the many years and decades that followed.

Insight into Mitchell's career was presented to those on hand through an NFL Films piece that documented Bobby's more than 40 years in the NFL, first as a player and then as a front office executive with the Redskins. Mitchell used the opportunity on Friday to encourage the teens on hand. The students traveled from various school districts in Akron, Canton, Cleveland, and Massillon.

"Remember this as young people. You travel with the twins, and their names are applause and criticism." He shared his personal triumphs on the field as well as discussed the pressure from the African-American community in Washington that was placed on him. As the first black star for the Redskins, the African-American fans expected him to be perfect at all times. 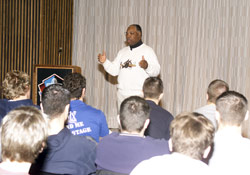 "I grew up and things were expected," he commented. "You did it and you took what came with it."

The audience listened intently as Bobby recounted his personal relationship with the late Bobby Kennedy. The former senator and presidential hopeful had befriended Mitchell upon his arrival in the nation's capital in the early 1960s. Mitchell also spoke about several other influential people in his life which included four Hall of Fame coaches -- Paul Brown, George Allen, Joe Gibbs, and the legendary Vince Lombardi.

It was Lombardi who encouraged Bobby to work hard and that his dreams would come true. Mitchell pursued a career in the front office of the Redskins during a time when few African-Americans worked in such positions. His dream of becoming a general manager never happened as Mitchell retired last year as the Redskins assistant GM.

"Dreams don't always come true," he exclaimed. He quickly noted that dreams can come 95% true and how truly fortunate he was to have experienced the many high and lows that shaped the person he was and is.