Hall of Fame defensive end Elvin Bethea took part in the Hall of Fame's Best of Yesterday and Today autograph series on Saturday May 8.

Before he greeted the hundreds of fans who lined up for his autograph, Bethea presented a game worn jersey and helmet to Hall of Fame President John Bankert.

Bethea, who starred for 16 seasons for the Houston Oilers, donated his helmet and jersey that he wore during the 1978 NFL season to the Hall. The helmet clearly shows the wear and tear of an NFL season as the dominating defensive end donned the headwear for the entire year. The jersey, a special mesh version, was created solely for a playoff game in Miami. 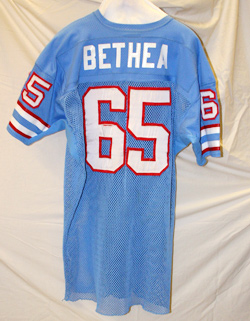 The Oilers finished second behind the Pittsburgh Steelers in the AFC Central Division that season at 10-6. Their post-season began with a visit to south Florida to battle the Dolphins in the 1978 AFC Wildcard Game at the Orange Bowl on Christmas Eve.

Because the Oilers played inside at the Astrodome, the team did not have any special uniform to combat the heat. So, the mesh jersey was made and worn by the Oilers for that game.

Houston, with the help of Bethea's two tackles, two assists, and one sack, downed Miami 17-9 to advance to the Division Playoff Game against New England the following week. The Oilers beat the Patriots 31-14 before falling to the Steelers in the AFC Championship Game.

Bethea's jersey and helmet will be placed on exhibit in the Enshrinee Mementos Room. 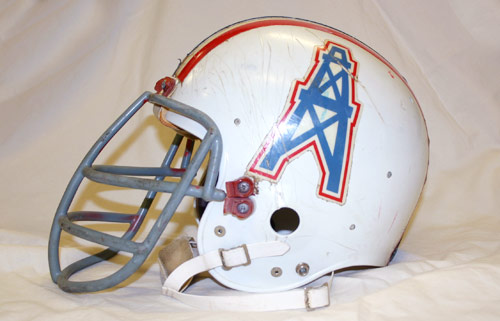 Barney speaks to group at HOF

The Pro Football Hall of Fame and Stark County, Ohio unveiled an exciting and ambitious new joint venture project. A dynamic bridge will be constructed on Interstate 77.